A Josiah in the American Episcopate 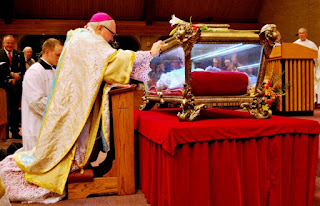 We read in Chapter 22 of the Second Book of Kings concerning the righteous King Josiah of Judah:

Josiah was eight years old when he began to reign, and he reigned thirty and one years in Jerusalem...And he did that which was right in the sight of the Lord, and walked in all the way of David his father, and turned not aside to the right hand or to the left...

And the king commanded Hilkiah the priest, and Ahikam the son of Shaphan, and Achbor the son of Michaiah, and Shaphan the scribe, and Asahiah a servant of the king's, saying, "Go ye, enquire of the Lord for me, and for the people, and for all Judah, concerning the words of this book [of the law]: for great is the wrath of the Lord that is kindled against us, because our fathers have not hearkened unto the words of this book, to do according unto all that which is written concerning us."

So Hilkiah the priest, and Ahikam, and Achbor, and Shaphan, and Asahiah, went unto Huldah the prophetess, the wife of Shallum the son of Tikvah, the son of Harhas, keeper of the wardrobe...and they communed with her. And she said unto them, Thus saith the Lord God of Israel, Tell the man that sent you to me, thus saith the Lord:

"Behold, I will bring evil upon this place, and upon the inhabitants thereof, even all the words of the book which the king of Judah hath read:Because they have forsaken me, and have burned incense unto other gods, that they might provoke me to anger with all the works of their hands; therefore my wrath shall be kindled against this place, and shall not be quenched.

But to the king of Judah which sent you to enquire of the Lord, thus shall ye say to him, Thus saith the Lord God of Israel, As touching the words which thou hast heard: Because thine heart was tender, and thou hast humbled thyself before the Lord, when thou heardest what I spake against this place, and against the inhabitants thereof, that they should become a desolation and a curse, and hast rent thy clothes, and wept before me; I also have heard thee, saith the Lord. Behold therefore, I will gather thee unto thy fathers, and thou shalt be gathered into thy grave in peace; and thine eyes shall not see all the evil which I will bring upon this place." (2 Kings 22:1-2, 13-20)

King Josiah was in fact killed, taken from life prematurely at the Battle of Megiddo at the age of 39 by an Egyptian arrow (2. Kings 23). Josiah by no means a bad king; he was one of Judah's most righteous kings, with a righteousness and piety that stood out even more because of the darkness of the times in which he lived. He, of all people, did not "deserve" to be taken from this world so soon. Had he lived and had his religious reforms continued, he could have potentially restored the fortunes of Judah and averted the judgment of his people. That is the effect a righteous leader can have on his nation.

Ironically, though, it was precisely because of that righteousness that the Lord struck him down. Judah's sins were so great that God had determined to punish them. But because of the goodness of Josiah, God decided to preserve him from the evil that was to come upon the kingdom by taking him from life prematurely so he would not need to witness God's fearsome judgment. In a wicked, barbarous time, the death of the righteous is a mercy to them.

I could not help thinking of the story of King Josiah upon hearing of the death of Bishop Morlino last month. And I thought the same thing upon the sudden and unexpected death of Antonin Scalia. And Cardinal Caffarra.

The lights are going out all over the Church and they will not be lit again in our lifetime.
Posted by Boniface at 12:00 AM

Those of us who "account for nothing" must be the little lights in our own little worlds. It is the meek who will inherit the world.