The Cringiest Christmas Homily Ever 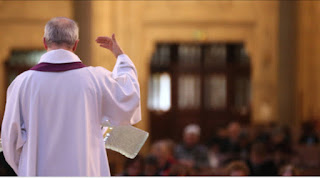 This Christmas Eve I sat through what was undoubtedly the cringiest homily I have ever heard in my life.

Now I’d like to think I am (mostly) beyond the “Oh my gosh listen to what abuses I saw at Mass!” sort of posts, but sometimes I run across something that still drops my jaw. And this Christmas Eve, I heard something that made me realize that, no, after sixteen years as a practicing Catholic in the U.S.A. there are still things that can surprise me.

I was with a non-Catholic friend who had a sincere interest in going to a Catholic Mass. I selected a historic church in one of Michigan’s urban centers that is known for its beauty, as well as its liturgy. This place has a weekly TLM said by the pastor, generally solid preaching, and a very robust Catholic community. I thought it would be an excellent first exposure to Catholic worship.

The liturgy was a Novus Ordo, but that is irrelevant to the story. The homilist was a very old priest-- so old he had to lean on an altar server when he moved. As he shuffled over to the ambo at the homily I kind of gulped; this guy was not the usual pastor, and in my experience whenever a severely elderly, visiting priest gets a hold of a microphone the resulting sermon is usually the homilectical equivalent of a Jackson Pollock painting.

Anyhow, he began his homily by telling a story about the Boys Town orphanage in Nebraska. The story took place many years ago, when the orphanage was under the administration of Fr. Edward Flanagan (now Servant of God Edward Flanagan). The story took place on one Christmas Eve long ago as a father Flanagan tried to compose a homily for the holy day mass. However, he found himself distracted by all the boys who lived in his quarters. Or, in the words of the homilist, “You know it’s hard for a priest to focus when there’s so many young boys living with him.”

At that point I kind of smirked and thought to myself “Okay, poor choice of words, Father, but I'll give you a pass.” But it got much, much worse.

The homilist went on to relate that while composing his homily, Fr. Flanagan was approached by a nun, who told him that a little boy named Paul was hiding under his bed crying and refused to come out. Repeated admonition had failed to get Paul to come out from under the bed. Frustrated, Fr. Flanagan left his desk to go attend to the crying boy.

Fr. Flanagan found Paul just as the nun had said, hiding under the bed crying. Father asked him what was wrong; Paul said he was lonely at the orphanage and had not had any visitors.

Here’s where the homily got real cringey. The priest related that Fr. Flanagan decided to “climb under the bed in order to comfort Paul.” Once under the bed, Fr. Flanagan held Paul and cried alongside him. As the priest put it, “Fr. Flanagan day there under the bed alone in the dark with Paul, holding him and crying.” By now everybody in the congregation was shifting around uncomfortably...like, literally, I could see people all over shuffling around in their seats and looking at their feet. But the priest continued.

Oh my...you should have seen my face. My jaw must have been on the ground. I could not believe the priest was narrating this.

“I’ll stay here with you,” said Fr. Flanagan, “and I’ll be here when you wake up.” Then the priest related how Fr. Flanagan sat their cuddling the boy until he fell asleep and stayed with the boy in his room while he slept rather than finish his Christmas homily.

By this time many in the congregation were looking around in profound confusion and disbelief. My mouth was agape wondering how on earth this old priest could have thought this was suitable material for a Christmas homily in late 2018. More astonishing was the priest’s attempt to relate this story to Christmas and the Incarnation:

“And that’s exactly what our Lord did for us. Just like Fr. Flanagan climbed under the bed to comfort Paul, so our Lord came down to console our human nature in its weakness.” And that was it. That entire story just for that little tie in at the end. Out of all the things ever written or said about the Incarnation in the vast, rich history of the Church, the best analogy this homilist could come up with was a story about a priest crawling under a bed to cuddle a boy alone in the dark.

The entire congregation breathed a collective sigh of relief when this awkward homily ended. We were all cringing and shifting about in our seats wondering how this priest could have thought such a homily was prudent. I was just eager to forget it and get on to the Eucharist.

I pass no judgment on the original story or the person of Fr. Flanagan; but I think it is beyond dispute the selection of this particular tale and the manner of its retelling at this specific moment in the Church’s life displays an astonishing level of disconnect from reality on the part of the homilist. Thankfully my friend, who as I said was not Catholic and was also from a foreign country, had no knowledge of the clerical abuse scandals in the USA and did not pick up on the discomfort I had at the story.

And that’s the real sad thing about what’s going on today in the Church. The story told about Fr. Flanagan probably was just an innocent story about a priest trying to console a lonely child. But anything with priests and boys alone now makes Catholics cringe, and the ongoing revelations attest that our cringing is not unjustified. And the cringing will continue.

Our preacher probably talked for twenty minutes without really saying anything at all. That's what I find more cringe-worthy, and strange. All the rich history and teachings as you mention, and they'll relate some pathetic anecdote. What ever compelled them to convert or become priests? Monks in their habits and priests in their cassocks dancing like clowns.

"As he shuffled over to the ambo at the homily I kind of gulped; this guy was not the usual pastor, and in my experience whenever a severely elderly, visiting priest gets a hold of a microphone the resulting sermon is usually the homilectical equivalent of a Jackson Pollock painting."

Of course there are so many tragically missed opportunities with poor homilies that this line should not be funny, but I just had to laugh. Perfect description! I was present when a priest matching this one's description practically bumped the presiding priest aside to add to the prayers of the faithful a request to remember the recently departed Bea Arthur…and we were treated to a short obituary on her qualities.

But funny aside, I agree completely with your unease at this and the reality that it is not understood by those who need to rectify it.

Bea Arthur was a talented comedian, but her character on Maude often supported abortion, and I tend to think that reflected Arthur's position as well. She was also a lesbian and Jewish. Just sayin.

Yeah we wouldn't want to hear a story like that, please God it was innocent when it was done. We are all corrupted now so it's hard to hear about anything with a priest and a boy and not cringe. That's not our doing, it's theirs, these evil homosexual priests who prey on boys and young men. It's our reality. They can own it.

You missed the glaringly obvious point.

Satan’s constant and consistent attacks on the church are focused on those who have the power to banish him; the priests.

He is also well aware that it is only in our being trusting as children can we gain entry into heaven.