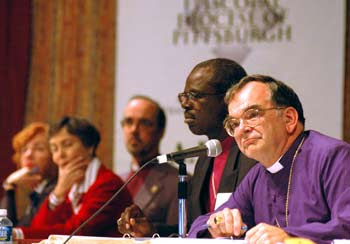 More schism in the Episcopal Church over the issue of homosexual ordinations as the Diocese of Pittsburgh, led by non-Bishop Robert Duncan voted to secede from the Episcopal Church. Pittsburgh is the second diocese to leave the church since the 2004 (non) ordination of Gene Robinson, and the Primate of the Episcopal Church (Katharine Jefferts Schori) mentioned at least three other dioceses that she knew of who were contemplating a secession, including the Fort Worth and southern-Illinois regions.

Of course, media coverage of this event was full of interviews with theological and social liberals whining about the intolerance of those conservatives voting to leave the Church, and lots of crap about how Jesus wouldn't want to exclude homosexuals from ministry, etc. The thing I found most interesting was the expression of the differing ecclesiological views of the Episcopalian church from the Catholic Church, which essentially is the root of their problem.
Katharine Jefferts Schori, head of the Episcopal Church, said that the United States Episcopalian Bishops had voted to relieve Bishop Duncan of his ministry, which she explained meant that effectively he was no longer a bishop (not that he ever was) and that he could no longer exercise the powers of a bishop. She explained that a Episcopalian diocese exists only by its unity with the "General Convention," and that by extension, a bishop who attempts to secede from the church at large automatically loses his powers, just like an employee who quits a job loses the authority from the company that came with that job.
This is the whole doctrinal difficulty with non_Catholic churches in general: the ministry is not something that has to do with the person himself, but is seen as a job or office, whose power comes not from Christ directly but from the delegation of the "General Convention" or whatever body is running the outfit. For Episcopalians, a priest is certainly not "a priest forever" as we would understand it in the Catholic Church. The priest is a person filling an office, whose fitness is based on certain performance-related criteria.
Notwithstanding the fact of null orders, this ideology is the reason why the Episcopalian Church sees no logical reason why a homosexual or a woman can't serve as a bishop just as well as a man. The issue is shifted so the question becomes about how well a person can "do" their job rather than about what they are. The authority comes from some human body or council, not from God. I have to admit: if we belonged to a church who adopted that ecclesiological vision of the ministry, then there would be no reason why a woman couldn't be a priest or a bishop.
But fortunately, we do not share that vision (though there are some in the Future Church establishment who would no doubt like it to be so). A priest or a bishop is never just a person who does a job, but something somebody is, and that they are forever, regardless of what choices they may make. An excellent book that really emphasizes the identity of the priest is the Graham Greene novel The Power and the Glory. Let the Episcopal non-Church scatter and divide over the issue of the false-ordination of homosexuals! But for us, we remember the words of the Psalms, "Thou art a priest forever according to the order of Melchizedek."
Posted by Boniface at 12:46 PM

Usually love your comments, in this case feel there is a confusion of categories here. It is my understanding that the ecclesiology of traditional Anglicans (of which the Episcopal church used to be a member) is not seriously different from that of the RCC, whatever your views may be about the validity of our holy orders.

On the other hand, the current regime in the Episcopal Church has a radically different view about that, as about many other things, in addition to having a penchant for using language rather loosely. Following Foucault and his ilk slavishly in this respect, one suspects. One can't always be certain exactly what they are saying, except that whatever it is, it's not orthodox!

Many Anglicans consider that the ECUSA and similar bodies (e.g., the ACoC) have left the Anglican Communion, and that entities like the Diocese of Pittsburgh are taking steps to ensure that they remain within it.

The traditionalist remnant are left pondering how best to care for one another as Christians, even if from the view of your church we are (...here I forget the term, which defines degrees of consonance with the notion of full communion) not quite "with it."

I agree with you, but I would argue that the position of the leadership of the Episcopal Church (Katharine Jefferts Schori) does not represent traditional Anglican ecclesiology, just as those in our own hierarchy who push for the ordination of women do not share traditional Catholic ecclesiology.

"[A] bishop who attempts to secede from the church at large automatically loses his powers, just like an employee who quits a job loses the authority from the company that came with that job."

Ms. Schori's own argument would therefore excommunicate and reduce to nothing Archbishop Cranmer of Canterbury and his Anglican Church.