From Butler's Lives of the Saints, for August 14th, a very intersting episode:

In 380 [The Roman Emperor] Theodosius the Great and the co-emperor, Gratian, issued a decree that all their subjects were to profess the faith of the bishops of Rome and Alexandria. Eight years later he sent an officer into Egypt, Syria and Asia Minor, whose duty it was to enforce an edict that all pagan temples were to be destroyed; this violent policy was carried out very roughly and not unnaturally aroused the anger and resentment of the pagans. When the imperial prefect arrived at Apamaea in Syria he set his soldiers to work to pull down the temple of Zeus there, but it was a large building and well built and the soldiers, being inexpert at systematic demolition, made little progress. The bishop of the place was one Marcellus; he told the prefect to take off his men to their next job and in his absence means would be sought to destroy the temple. The very next day an engineer came to the bishop and said that, if he would pay him double wages, he could do the work himself. St. Marcellus agreed, and the man proceeded to demolish the temple by the simple device of undermining some of the supporting columns, holding up the foundations with timber, and then burning it away.

Marcellus proceeded to have other temples dealt with in this manner, until he went to one in a certain unidentified place; this building was stoutly defended by those who worshipped in it, and the bishop had "to take up a position some way from the scene of the conflict, out of the reach of the arrows, for he suffered from gout and so was not able either to fight or to run away." But while he was watching from this point of vantage, some of the pagans seized him, and put him to death by throwing him into the flames.

A bishop who was an expert in the demolition of pagan temples! This would certainly never be the case today. Now, of course, we have the rector have the Fatima shrine allowing pagan worship and receiving blessings from Hindus: here is Rector Guerra receiving a Hindu shawl covered in the "sacred text" of the Hindu scriptures. 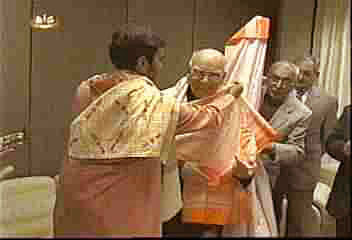 And they're also experts at demolishing Catholic churches these days!!!