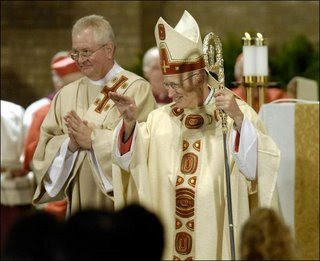 We are very blessed in our Michigan diocese (which will remain unnamed, but it so happens to have the same name as the capitol of the state) to have Bishop Earl Boyea. Besides the fact that he is a historian and a lover of the Traditional Mass, he has also proved to be the perfect harmonious union between being a keen and precise administrator and a charitable and loving pastor. Before I took my trip to Emmitsburg with the kids, the Bishop sent me a personalized letter asking me and the Youth to pray for him at the Seton Shrine, which we did do.

This week, our Bishop made a strong statement against our apostate Catholic Governor Jennifer Granholm and her support of Michigan Ballot Proposition 2, which would completely legalize unrestricted stem cell research in Michigan. I love to give good Bishops credit when it is due, and this is certainly one of those times.

The Most Reverend Earl Boyea, Bishop of Lansing, today issued the following statement in response to recent comments of Michigan Governor JenniferGranholm:

In a Sunday address in Grand Rapids, Governor Jennifer Granholm incredibly said of Proposal 2 "As a Catholic, I can say to be pro-cure is to be pro-life." Of course, Catholics and all other responsible citizens will continue to seek cures for disease and injury. But to imply that Proposal 2 is a valid expression of Catholic principles is shocking. Nothing could be further from the truth.

Proposal 2, which goes before Michigan voters in a week, would give an unrestricted license to those who perform destructive experiments on human embryos. While the Catholic Church strongly supports legitimate forms of stem cell research and all other proper forms of scientific inquiry, the Church also teaches that is it is always immoral to destroy a human embryo. For that reason, the Catholic Bishops of Michigan have taken a strong position in opposition to this well-funded assault on human life.

Saint Paul reminds us that we must preach the Truth in season and out ofseason. The Truth will never go unspoken. To be in favor of Proposal 2 isnot to be pro-life. A well-formed Catholic conscience would never lead aperson to support Proposal 2 "as a Catholic."

I'm particularly glad that the Bishop addresses this increasingly common (and ignorant) fallacy that to be in favor of embyonic stem-cell research is to somehow be Pro-Life.

I'd like to hear from you all about any morally contoversial ballot proposals in your states. We also have one that is trying to legalize medical marijuana, but nobody is really paying attention to that one.
Posted by Boniface at 1:31 PM

Catholics can be somewhat encouraged. It appears we now have more real Catholic Bishops than we do "Catholic" senators and/or congressmen:

Support them in the days and years to come. Pray for them, and for more like them, always.

check out this tv ad, now running in Arizona.

I am not trying to stop people from figuring out what the Diocese is...anyone can figure that out. The important thing is that I do not say it in print, and whether or not they Google the Bishop's name, I do not know, but I know that upon Googling the name "Bishop Boyea," this post did not come up within the first 180 results (sites in Japanese came up first). I really think they just Google the name of the Diocese...if they Googled the Bishop's names, it would be constantly bringing up old stuff, too, like when he was in Detroit.