Just wanna get some... 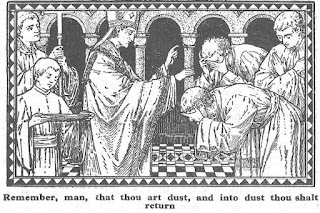 Here is a relatively humorous yet sad post from the blog Joy, linked up on the sidebar. It is the reflections of a music director on answering the phone in the parish office on Ash Wednesday, and it tells us something very insightful about the mentality of lukewarm Catholics who tend to show up around our parishes during Lent, Easter and Christmas. She relates:

"While working in the office today [Ash Wednesday], I have fielded many phone calls wondering, well, I know what they mean is "when is Mass today." How they word it though, is fascinating..."When can we get ashes today?""Are you offering a service with ashes tonight?"etc...(I wish I could remember more specifics) Not a single: "what time is Mass today?"

I was even sitting in the church, praying, this afternoon and someone wandered in... wondering something about "where's the ashes we can put on ourselves?" It was probably a good thing I couldn't think fast enough to give him an explanation of how horribly theologically incorrect that question was. (I just shrugged and told him he "had to" come to Mass at 7 to "get ashes.")

I've heard or read it said somewhere, that aside from Christmas and Easter, the other favorite times for Catholics to come to Mass is Ash Wednesday and Palm Sunday...because they "get something."(also, of course, the reason that so many people in poorly-catechized churches leave right after receiving Communion...because, well, they've "gotten" something, so therefore they must have fulfilled their obligation!)"


What an interesting observation - I knew Ash Wednesday was up there with Christmas and Easter, but I had not thought of it in the context of "getting something." It demonstrates the backwards mentality so many people have about Mass; Mass is about what I get out of it, not about worshiping the Triune God who is all good and all deserving of my love, as the Act of Contrition says (not that folks who only come to Mass once a year to "get ashes" would know the Act of Contrition prayer, with all likelihood), let alone understanding the true meaning of Ash Wednesday as remembering our own mortality and initiating the period of penitence that we will extend throughout Lent, as exemplified in the prayer, "Remember, O man, thou art dust, and to dust thou shalt return."

Still, it is an interesting testimony to the enduring power of Catholic customs. Ancient church historians relate that Julian the Apostate, though a professed enemy of Christianity, still made the sign of the cross when he was frightened. Others have noted that certain customary actions, such as men removing their hats when inside a church, persist long after faith itself has vanished. There is a certain durability about Catholic traditions, and the continued popularity of Ash Wednesday is evidence of this. Knowing this, of how much more value could these sorts of customs be if joined to solid Catholic preaching and faithful observance on the part of Catholics? Let is start with us.
Posted by Boniface at 3:18 PM

Leaving after receiving communion is what i call the "Judas Shuffle". Judas happened to leave right after he got something!