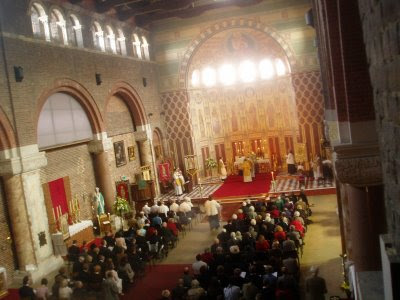 I came across this article today on the proposed union of the TAC with the Church by means of a personal prelature. It is an interview with Msgr. Marc Langham, an official at the Vatican’s Pontifical Council for Promoting Christian Unity. I don't know about you, but to me the statements of Msgr. Langham quoted in this article reveal an attitude about ecumenism that I hope is not the norm within Vatican circles. Here's the article from CNA with my comments and emphases.
Traditional Anglican union with Catholics ‘unlikely,’ Vatican official argues

Rome, Feb 3, 2009 / 03:43 am (CNA).- Casting doubt on media reports, a Vatican official familiar with the possibility of hundreds of thousands of Traditional Anglicans potentially entering the Catholic Church, has described as the scenario as “unlikely.”
Speaking to SIR News, Msgr. Marc Langham, an official at the Vatican’s Pontifical Council for Promoting Christian Unity, said “indiscretions” and “media rumors that do not correspond to the truth” have surrounded the reporting of the Catholic Church’s relations with the Traditional Anglican Communion (TAC), a group which has broken away from the Anglican Communion based in Canterbury.
“We have not been informed that this is going to happen; maybe the Congregation for the Doctrine of the Faith is more informed but we have not received any update,” he said. “All we know is what we have read on newspapers and on some blogs.”

“What is on the Internet and in the press seems quite strange [Why? What is so strange about people reuniting with Rome?]. It seems to me to be very unlikely,” he continued.

This is unlikely because “conversion is a personal process and a group of so many people could hardly be accepted,” he argued [Pause. Okay, a group of so many people could "hardly be accepted?" That is insane. If I understand him right, he is saying that because conversions are personal, they cannot accept en masse returnees? That is crazy: first, mass conversions/returns are the way the Church has always functioned. What about the 1596 Union of Brest-Litovsk that gave us the Uniate Catholics? What about the reception of 3000 Assyrians into the Catholic Church en masse just last Spring? This kind of thing is business as usual in the Catholic Church and (in my opinion) it is idiotic to say that just because conversion is personal means we can't accept returnees en masse. Second, I would say that it has never been necessary for every single individual who wants union with the Church to go through a personal formal initiation process. This goes right back to St. Paul, who baptized heads of households and thereby everyone else in the household converted as well in deference to the judgment of the head. If the heads of the TAC want union, then it stands to reason that anybody who remains in the TAC obviously wants union too and agrees with their leader's positions - the fact that they remain in the TAC after the talk of union is evidence of their personal desire for it. This Msgr. Langham sounds like he wants each and every TAC member to go sign up for RCIA at some parish somewhere] .

He also criticized the TAC’s reported membership of 500,000 as an “overestimation,” saying it is a “very small group” [And that matters why? The Good Shepherd goes looking after the one who has gone astray. He doesn't say, "Well, it was only one...no big loss"].

Msgr. Langham added that TAC bishops are married and its leading archbishop has been married twice. “Therefore he is not in the position to be accepted as a bishop” [This is a true obstacle, but the status of the TAC bishops has not been addressed by either side yet. The TAC so far has been docile and willing to submit itself to the Holy See - though the issue of the married bishops is a true problem, we ought not to throw obstacles out prematurely before even the first steps have been taken. It is as if Msgr. Langham has already decided that there can be no union and is trying to bring out all the reasons why it couldn't possibly work. Let's instead get the TAC to the table, get all parties to agree that union is desirable and then work out the details after we have already agreed on a common goal] .

According to SIR, he also noted that TAC members are not in communion with the Archbishop of Canterbury. “They are not true Anglicans,” he argued. “They are not recognized by the Anglican Communion. Accordingly, we do not know what their status is” [Pause. I have never heard that they are "not true Anglicans." I can accept that within the Anglican Communion they may have an irregular status, but that is not the same as saying they are not true Anglicans, just like nobody says the SSPX are not true Catholics, despite their canonical status. But a more fundamental question for me is this: Who cares whether they are recognized by the Anglican Communion? We are discussing union with Rome, not union with Canterbury. Is Msgr. Langham saying that we can't accept Anglican converts unless they are good Anglicans first? Well, if they were good Anglicans they wouldn't want to be Catholics! And why should they want the recognition of Canterbury, which also recognizes homosexuality, women's ordination and a host of other abominations? Who gives a damn whether they are in union with Canterbury or not].

The TAC’s admission into the Catholic Church will raise “difficulties” for the Archbishop of Canterbury and the Anglican Communion, “which is why we must be very cautious and prudent,” he said [Okay, now I see what his real problem is: he is afraid of offending mainstream Anglicans by admitting the TAC, pure and simple. He'd rather turn away hundreds of thousands of humble and willing persons desiring union with the true Church in order to maintain a position of "fruitful dialogue" with the liberal Anglican Communion].

Earlier reports had indicated that the Vatican’s Congregation for the Doctrine of the Faith (CDF) has recommended that the Traditional Anglican Communion (TAC) be given a personal prelature if talks between the TAC and the Vatican succeed. An announcement reportedly could be made after Easter this year."

Well, it seems obvious that this is the tired old (and by old I mean new, post-conciliar) view of ecumenism: an ecumenism that is based not on conversions and returning to Rome but to maintaining an amiable and meaningless state of perpetual dialogue at any cost, even at the cost of denying people who want to come into the Church the means to do so. It reminds me of the old story Dr. Hahn used to tell about the Catholic priest who told him when he wanted to convert that the Church since Vatican II thought the best way for Christians to serve God was to remain in their own respective denominations.

Look how circular this reasoning is: the point of ecumenism is for all Christians to be one. To accomplish this, we need endless dialogue. This dialogue has actually led some (TAC) to desire to bring about this oneness in a formal, visible union. But that union might upset the dialogue with Canterbury, therefore the idea is full of "difficulties" and ought to be discouraged. Why? Because it might hinder dialogue. And why do we dialogue? So that all Christians may be one. It is the insanity of valuing the dialogue and the means over the goal and the ends: return to visible communion with Rome.

I hope those in the CDF who are working on this take a more intelligent view than this. If we really believe that the Catholic Church is the true Church in which all the means of grace are found given by Christ Himself, then I can't see one plausible reason to turn away people willing to convert en masse just because of the lame excuses that they are "so many" or that it will present "difficulties" for Rowan Williams. If we really believe what we profess, we should be dragging souls aboard as if this were the one Ark that could save them from the floods of the world - which it is. To do otherwise is, to use a vulgar colloquialism from my teenage years, freakin' retarded.