Alleged "missing-link" is all hype 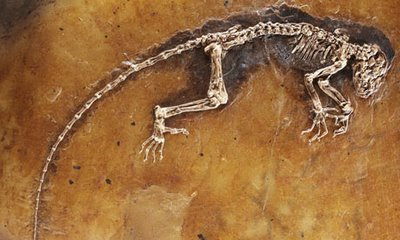 The scientific community has triumphantly announced that it has located the so-called "missing link" in human evolution - an alleged 47 million year old lemur-looking creature called "Ida." The media hype about the find was bigger than the find itself as science euphorically proclaimed that Darwin had been entirely justified and that there was no longer any thread of credible doubt concerning his theory of evolution.

As I read the varied reports on Ida, my first question was what makes this fossil so different from any other primate fossil that merits it being called the "missing link?" Apparently, many other scientists are asking themselves the same question. It seems that while the fossil of Ida is unique for its completeness and preservation (it is 95% complete, whereas most fossils from the same era are isolated teeth or single bones), the fossil tells science very little we did not already know. This senitment was echoed by various scientists interviewed in a Fox News report, viewable here. "What does it tell us about human evolution that we didn't know? Precious little," said Stony Brook University paleoanthropologist John Fleagle.

The proponents of the Ida fossil as the missing link, however, are proposing a novel idea, even by evolutionary standards, in asserting that humanity descends neither from the omomyids nor the tarsier groups, but from a third group, the so-called adapids, another primate group that died out in the Eocene period. The idea that human beings and larger primates came from the adapid group is not a widely accepted one in evolutionary biology. Paleontologist Richard Kay of Duke University says, "They claim in the paper that by examining the anatomy of adapids, these animals have something to do with the direct line of human ancestry and living monkeys and apes. This claim is buttressed with almost no evidence. And they failed to cite a body of literature that's been going on since at least 1984 that presents evidence against their hypothesis."

Furthermore, it is not even certain that the Ida fossil even belongs to the adapid group. It is purely conjectural. Other assertions that the Ida fossil must be a precursor to humanity by virtue of certain similarities in teeth, toe and ankle bones with other anthropods are not as convincing in light of the fact that other prehistoric lemurs, lemurs that everybody agrees had no part in human evolution, also share these characteristics.

Essentially the argument boils down to this: if Ida is an adapid (which we don't know), and if adapids in fact are the common ancestor of humans (which we also don't know and which most scientists do not believe to be the case), then Ida is (perhaps) a missing link. It really is circular reasoning: this fossil is the missing link because it belongs to the adapid family from which humans descended. How do we know humans descended from the adapid family? Because of the discovery of the Ida fossil. See the nonsense?

The number of intermediate varieties, which have formerly existed on the earth, (must) be truly enormous. Why then is not every geological formation and every stratum full of such intermediate links? Geology assuredly does not reveal any such finely graduated organic chain; and this, perhaps, is the most obvious and gravest objection which can be urged against my theory (Origin of Species, 10).

If Ida were a real transitional fossil, would we not expect it to look a lot more like a creature of the homo genus (i.e., like an upright walking primate or man)? Instead we have a small, lemur like creature. The most recent non-homo alleged ancestor of man is Sahelanthropus, who was undoubtedly an upright walking primate whom evolutionists say lived about 6 million years ago. Presumably, the "missing link" between primates and homonids would have to be something less than homo habilis but more developed than sahelanthropus; i.e., the real missing link, if it existed, would be a very "mannish" looking primate. How then does this lemur-looking creature, which lived 47 million years ago, almost 40 million years before sahelanthropus, suddenly become the missing link? It is like looking for a missing link between a turkey and an ostrich and then positing a hummingbird as the transitional form. It doesn't make any sense.

I suppose some could say that Ida is not a missing link between primates and humans, but between other lower mammalian creatures and primates - very well, but if so, what on earth does that have to do with human evolution? How is it prove anything about human ancestry to assert this fossil as an example of, say, a rodent turning into a lemur?

As I said, the claims that Ida represents a "missing link" are just hype. First, it begs the question that the common ancestor of humanity is the adapid family and not the omomyid or tarsier, as other anthropologists believe. Second, it makes a leap in asserting that Ida is an adapid, when in fact she has more in common with the lemur-tarsier family. That is not even taking into account inerrancies in dating these fossils, other explanations for their existence, etc. Those are all fascinating questions that merit more attention. But the evolutionists prime goal with this discovery is more to justify Darwin and take away any doubts that may have existed due to the lack of transitional fossils than to really learn about primitive primates.
Posted by Boniface at 4:21 PM

Boniface, how do you picture to yourself the creation of the first human beings? I am interested in how Catholics who question Darwinian evolution imagine the appearance of humanity on earth. Of course I am very familiar with the account in Genesis. I do not deny the relevance of that account to my question, but I do not anticipate an answer based on biblical fundamentalism. I became aware of this anti-Darwinian current when I embraced traditional Catholicism during the last several years. Please help me to "see" what you are all seeing.

I think I'd rather answer this with another post, if its all the same. But I wonder what you mean by saying you don't anticipate my answer to be "biblical fundamentalism?" I know what a fundamentalist is, but is your use of this term just another way of saying, "I hope you don't take the Bible literally do you?" If so, I certainly don't think it is fundamentalism to take the Bible literally - just as the Fathers, and the Apostles, all took Noah's Flood literally. So, give me a day or so and I'll respond.

Yes, I did mean "literally." Sorry for the careless choice of words!

Don't forget St. Augustine's take on Genesis. It's interesting that the "gem" you excerpt from him omits what he says about reading it literally!

I'm trying to understand the arguments on all sides of the "Darwinian debate". Could you gentlemen link or copy/paste me Boniface's reply? I'd be quite grateful.