My eldest daughter Jenna made her First Holy Communion at our home parish this past weekend, May 2nd. Thought I'd share some pictures of it with you, my extended blogging family:

This first one is of Jenna with our parish priest, Fr Gerald, immediately after the Mass was over. There was a ton of people trying to take pictures during the reception of Communion itself, which I of course did not do. Fr G served the First Communicants by intinction, which was very nice since they got to receive the Precious Blood and didn't have to be entrusted with holding the chalice, which they had not practiced. I should also mention that the dress and crown/veil Jenna is wearing were used by my mother at her First Communion and date from the ealry 1960's. 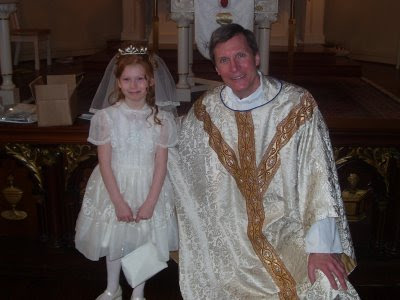 Here is myself and Jenna posing for a photo in front of the Church right by the Michigan Historic Site marker. Our parish is the oldest English-speaking parish in the state. I guess any shred of anonymity I was pathetically preserving is destroyed with the posting of this photo: 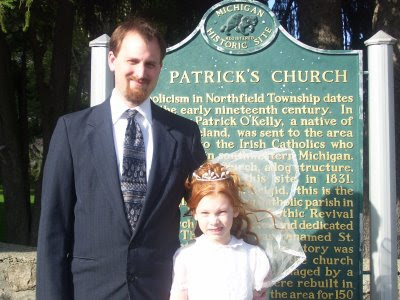 Here's a nice one of my whole family (at least 4/5 of it) in front of the stone wall on the grounds of our parish. My son, Phillip IV, is for some reason missing from this picture. I think he was off crawling around in the dirt or something (just kidding): 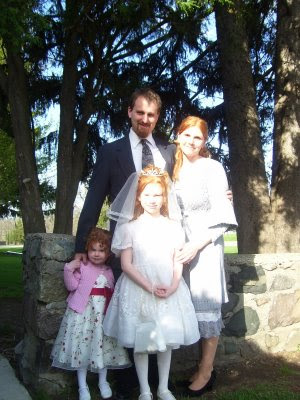 Now we come to the communion cake, which was a yummy chocolate cake with white frosting and some sort of raspberry jam on the inside. It was very tasty. 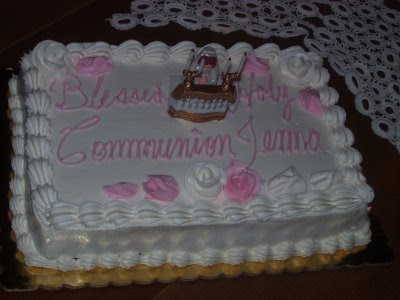 One thing I found very interesting was that the cake topper depicted a little girl kneeling to receive First Communion behind altar rails. How beautiful! Where is that ever done nowadays? This cake was purchased from a secular, run-of-the-mill cake shop, and the First Communion cake topper they happened to have depicted a reception according to the traditional way! Isn't it interesting how sometimes the traditional practices stay in people's minds a lot longer than they actually remain in practice. Hopefully we will see more First Communions with altar rails in the future, but I find it fascinating that when the people who designed this cake topper thought of First Communions, they immediately thought of altar rails, perhaps innocently ignorant of the fact that such receptions have not been the norm in the Church for a long time. Last we come to baby Phillip IV, mowing on some tomatoes at Olive Garden after the Mass was over. He is such a great eater - tomatoes, broccoli, green beans, carrots - he loves all things vegetable! 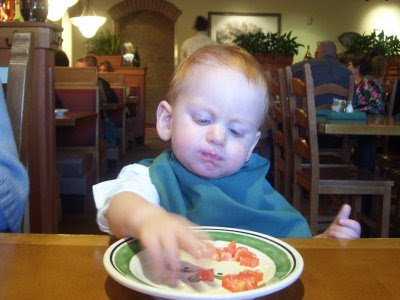 I probably won't have a chance to post for a day or two - our parish is getting ready for Confirmation on Wednesday evening with Bishop Boyea. Pray for us!
Posted by Boniface at 9:44 PM

so funny that i knew that was an olive garden plate before i read your caption!!