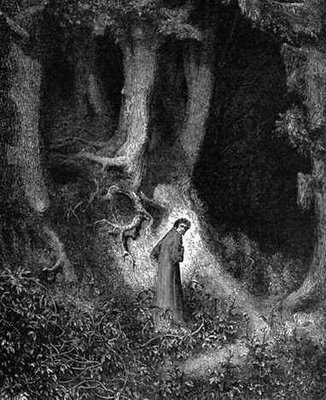 Dante alone in the dark wood; an image of man's profound isolation from God in his fallen state.
Yesterday I acted in the role of a judge on a panel that was charged with evaluating a senior presentation at a local public high school for students in AP Literature. The particular student I came to evaluate was doing his report on society and redemption, focusing on Dante's Inferno. Very good theme, althought, to be fair, he should have included the other two books as well, but I understand that he was pressed for time and that Inferno presents the most easily accessible imagery.

He did fairly well. He was hampered a bit by the rules of the project that forced him to choose a theme and discuss it using a classic and a modern work, and it made the presentation a bit jumbled. He jumped from point to point with little sequence and abused Power Point (as everybody does) by just putting up a bunch of text with no images.

Nevertheless, he brought up a very interesting point that I had never dwelt on before. As we know, sin is a personal issue, both because we commit sin personally, and also because we must be personally absolved from it by God. It is thoroughly personal (not to underplay the reality of collective sins as well). So sin must be dealt with personally and atoned for personally.

Yet, we live in a social setting, and sin has social consequences. Nevertheless, the aims of society oftentimes conflict with the best good of the individual. The interesting thing he dwelt on was that sometimes society discourages repentance and redemption from sin by "rewarding" the sinners and looking down on the righteous. Of course, it is nothing new that the wicked prosper and the righteous suffer, but I had never contemplated the social aspect of it: that society itself can encourage this arrangement.

The kid brought up a great point, how rock stars are "expected" to be dissolute and gain more noteriety and publicity because of this fact, thus discouraging any repentance or conversion. Likewise, a public person who cleans up their act and starts living righteously is no longer interesting and is quickly forgotten.

But he took this a little further and said that virtue is discouraged and vice encouraged because sin is made more economically appealing by society. Many Catholics who try to live justly know this firsthand. The temptation of witholding offerings to your church, or working on Sunday, putting in a lot of extra hours at the expense of family-time, tax incentives for single-parents and anti-family tax statutes, yielding to the temptation to take more money for something unjust, paying extra for an alternative product that was not produced immorally, shelling out extra cash for food that isn't poisoned, paying to send your kids to the (hopefully) Catholic school, paying for your children's upbringing while contracepting couples can blow their wealth on amusements...all these factors involve economically penalizing the person trying to live righteously and rewarding those willing to compromise themselves.

Some of them are up to us - it is my choice to work on Sunday or not, but when 3/4 people do choose to work on Sunday, the average income of everybody is higher and I am de facto penalized because I choose not to do what everybody else is doing and make less for it; even though I have done it to myself, it would not be a penalty is nobody else did it either and the option to take money for working on Sunday was not even a possibility.

Thus the Christian is put into a position where society both rewards and applauds the degenerate and also makes secularism more economically profitable than the Christian life. So there is social pressure as well as financial pressure to conform and become secular. This pressure creates a social climate in which even the decision to begin penance and undertake the first steps of the Christian life is extremely difficult.

Difficult, but by grace not impossible. This, I think, is why there were many more saints in ages past. Even though the wicked have always prospered by their own cunning and the righteous have always been stepped on, at least in the Middle Ages there was a general climate socially that encouraged piety and provided positive social reinforcement to those truly seeking sanctity. This means for us who are seeking sanctity today that we start in the negative right out of the gate. We set off to swim across the lake but have a weight tied to our ankle straightaway before we take our first stroke. That's why God's grace is ever more needed today than ever - perhaps that's why the message of Divine Mercy came to us only in the modern age.

It reminds me of St. Francis' saying when one of his disciples asked him if the people living at the end of time would be holier than those alive in his own day. Francis said that the people at the end of time would not be nearly as holy as those in his own day, and that very few would undertake lives of penance. But, he said, nevertheless they would merit more, because they will have to live against much greater temptations and difficulties.

Interesting things to ponder, and from a public schooler at that.
Posted by Boniface at 2:33 PM

At the same time, the sad and scary truth is that all this "play time" is coming around and taking it's vengeance on society.

For example, since the contraception mentality has taken firm root, the society is shrinking and in fact disappearing due to birth rates below 2.1. Another example is working on Sunday to make a few extra bucks eventually got out of control and made Sunday a day employers might now DEMAND is worked on, where as before it was optional.

Just as bad, and few people talk about this, is the feminist push to make mothers feel like crap because a dollar value couldn't be assigned to motherhood. This pushed mothers to go to work, to get a job, which in turn abandoned the children and mixed up priorities. And what happened from there was average families now had TWO incomes due to mother and father working and with this spending cash they were having the time of their life. This made other mothers feel like crap because they couldn't afford all this fun, and this pressured them into going to work as well. BUT WHAT REALLY came back with a vengeance was that since more families had more money to spend, a horrible inflation ensued, and it eventually CAUGHT UP with the TWO PARENT income level, stripping away the extra spending cash and making it an almost necessity for both parents to work just to scrape by today.

So the truth is, God is never mocked, and sin will always lead to self destruction, even if things look like a breeze at the time.

It is also true that in the sexual arena, you may do anything that you want, as long as you are happy to do it. If you try to convert, then you are generally diagnosed as having a mental disorder.

Labels such as obsessed, repressed, etc. are common, and don't need much explanation. On the other hand, has anyone noticed that, unlike alcoholics for example, the only people who have sexual "addictions" are those who are trying to control or change their sexual habits in the face of a society that spews impurity to sell even the most insignificant of products?

If you are fine with your immorality, you are a "healthy" person. If you try to change, but find it difficult, only then are you "addicted."