Our Lady of the Rosary and the Capture of Timişoara 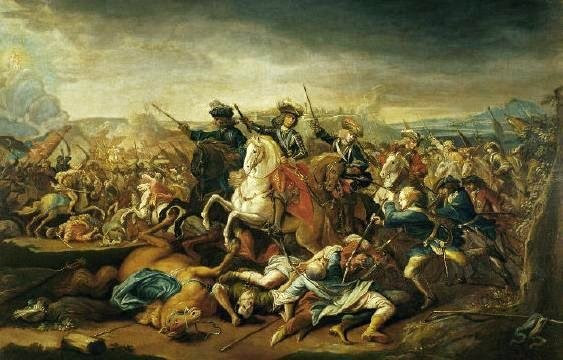 Austro-Turkish War of 1716-1718 arose out of the desire of the Turks to revenge themselves for the losses inflicted upon them in yet another great Catholic victory, that of Jan Sobieski of Poland at Vienna in 1683. That victory had eventually led to the Treaty of Karlowitz (1699), in which the Turks ceded Croatia, Slavonia and large parts of Hungary to the Hapsburgs. Though they still retained the provinces of Temesvar, Moldavia and Wallachia, the arrangement was humiliating to the Turks and no sooner was the ink on the treaty dry than they sought to reform their forces and get revenge on the Hapsburgs.

The war with Austria came on the heels of successful Turkish campaigns against the Russians (1710-1711) and Venetians (1715). At the beginning of 1716, the Grand Vizier Damat Ali massed an army of 160,000 Turks, Tatars and Janissaries at Belgrade and invaded Hapsburg territory. The Turkish aggression aroused the defenses of the Austrians, and the Catholic hero of the early 18th century, Prince Eugene of Savoy, was dispatched with an army of 91,000 Austrians, Hungarians, Serbians and Croats to defend Christendom and chasten the Turks.

The decisive engagement of the war happened early on, at the Battle of Petrovaradin (August 5). Despite being encircled inside a fortress, Prince Eugene managed to outflank the attackers with a broader circle of cavalry, trapping the Turks between the walls of the fortress and the encircling cavalry. The Turks were utterly annihilated; only 50,000 returned alive to Constantinople. The Sultan ordered the execution of Grand Vizier Damat Ali, but he was already slain in the battle.

After this stunning and unexpected victory Prince Eugene pressed on into Timişoara, which is a province then in Turkish-occupied Hungary. In a sweeping series of conquests that lasted from August to October, 1716, Euegene gloriously swept away the Turkish forces and city after city returned to Christian control after centuries of Turkish oppression. In October, 1716, the fortress of Temeswar capitulated, completing the liberation of Hungary. The conquest of Temeswar fell during the week of October 7-11th, drawing obvious comparisons to the victory at Lepanto one hundred fifty years earlier.

It was in light of this stunning rollback of Turkish power in Europe that Pope Clement XI raised the Feast of Our Lady of Victory to be celebrated by the Church Universal under the title "Our Lady of the Holy Rosary." Leo XIII would raise the feast to the rank of double of the second class.


As for Prince Eugene, he would go on to even more stunning victories, winning another almost miraculous triumph against overwhelmingly superior Turkish forces at Belgrade in 1717 and bringing a final defeat to the Turks in the Balkans.By the terms of theTreaty of Passarowitz, signed on 21 July 1718, the Turks surrendered the Banat of Temeswar, along with Belgrade and most of Serbia. Turkish power in the Balkans was broken forever, and from 1718 onward the Turks would only grow weaker at the expense of the growing European powers.

So, while we commemorate the great victory at Lepanto every year at this time, let us also recall the glorious victories of the Catholic Prince Eugene of Savoy in the Austro-Turkish War of 1716-1718, which were the culmination and flowering of the first victory gained at Lepanto a century and a half earlier.
Posted by Boniface at 7:23 AM