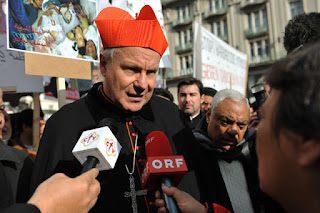 This has largely passed unnoticed in the western media, but it was reported last month that Cardinal Christoph Schönborn, Archbishop of Vienna, plans on closing an astounding 75% of the parishes in his diocese over the next ten years. This will reduce the number of Catholic parishes in the Archdiocese of Vienna from 660 down to 150.

Schönborn stated that the reason for the drastic reduction was a severe decline in the number of churchgoing Catholics as well as the "priest shortage." The new parishes, he stated, would each be service by four or five priests with a senior pastor reporting directly to the Archbishop. He also noted that the new parishes would be collaborative efforts where priests and lay persons run the parishes together.

This is essentially a 75% downsizing of the Church in Vienna. That is a massive, massive cut. Will the Austrian Church survive? Benedict XVI has called for a smaller, stronger "remnant Church," but what sort of remnant will be left? Here are a few things to consider:

First, Austria was recently the scene of a shocking display of priestly disobedience. 300 of Austria's 4,200 priests upheld a pledge known as the "Call to Disobedience" in which they promised to work towards the establishment of a radical progressive agenda in Austria (see here). Since Vienna is the largest diocese in Austria, it stands to reason that a large number of these dissenting priests are probably from Schönborn's own Archdiocese. If he is going down to only 150 parishes, how many of those parishes will be in the hands of these dissenting, radical priests? Even if only half of the 300 dissenters are from Vienna, that would mean, on average, each parish would have one dissenting priest teaching and preaching there. This can't be a positive outcome.

Second, it is certain that a vast amount of historically significant structures are going to fall into neglect. I have seen this before. The parishes that survive or emerge out of this will be the parishes with the modern amenities; newer structures built in the round that can accommodate a large volume of people and have ample parking spaces, etc. These newer, larger structures will be preserved as functional parishes while the small, beautiful historic country parishes that dot the Austrian countryside will be shut down as parishes and left to the uncertain care of local historical preservation societies to operate more as museums than real centers of devotion (like the parish church in Phoenix, Michigan). If you have ever been to Austria, your heart will break because you know what I am talking about; small parish churches and chapels spring up from the landscape there like flowers. Austria will lose much of what makes it beautiful.

I remember an anecdotal story about the ultra-liberal Bishop Kenneth Untener of Saginaw, MI. Untener was a promoter of married-priests, and when he heard that the Vatican was not as willing to entertain the concept of married priests as he had hoped, he said, "Well then, I will just reject all our applicants to the seminary and cut off the supply of new priests until I can starve them into accepting a married priesthood."

I don't know what is going on in Vienna, but this is tragic news indeed. The Catholic leaves that flourished and covered the land of Austria in beauty and piety are withering and falling from a dying tree in the onset of a new winter of unbelief. This is hardly a new Springtime!

Lord, when will this current generation of destructive bishops and priest die off?

I saw this as well, but I'm not sure it necessarily connotes the actual closure of buildings. The parish is an administrative and juridic division, not just a church building. It's entirely possible that some of these new parishes will maintain the use of multiple structures.

Of course, it's also entirely possible that it will be a complete train wreck. This guy may be the most overrated individual in the College of Cardinals.

Well, that would be a cluster. He does not say he is clustering parishes, but closing them.

A parish that has multiple Churches in which Masses are regularly, i.e., every Sunday, even week days as well, is not thereby a parish cluster.

I am a priest of the diocese of Vienna. The proposed plan in the diocese does involve closing, or perhaps more accurately, merging parishes (if the larger, combined parish juridically takes on all responsibilities of the former parishes, it seems more accurate to describe the parishes as being merged into one bigger parish rather than being simply closed.) But it does not involve ceasing to celebrate Mass in those Churches. They may no longer be canonically the parish Church, but Mass would still be regularly said in many of those Churches.

That said, there will surely be some smaller Churches in which Mass is no longer said, or not said as frequently. If that were not the case, the merging would do little to alleviate a "priest shortage", except perhaps inasmuch as there are many priests who aren't suited to be pastors in full charge of a parish, but only assistant pastors.

There are definitely some advantages to the plan, but I'm not convinced it's the best way to deal with the situation.

Perhaps some of this is just facing the fact that unfortunately the young generation in Europe doesn't seem to be continuing in the faith and the Bishop is recognizing this and being forced to consolidate to save money. I can say when I have gone to mass in Europe in places like Spain and Italy in many of the neighborhood parishes it is a few very old people, my wife and I, and maybe one other young couple and that is it (St Peter's Basicila in Rome exempted as that was full of everyone as was St Mark's in Venice on Palm Sunday)

Schönborn is destroying the Church in Vienna...

Perhaps, giving the Cardinal every benefit of the doubt, he is doing so in response to the tragedy of his disobedient and dissenting priests.

Were I him, I would reduce the number of parishes, promote orthodox pastors, and send the dissenting priests to tend to parishes under the eyes of my pastors and to offer masses w/o homilies, or only pre-approved ones. They would also live much more frugally.

Then, when they get sick of it and leave, I bring out my orthodox seminarians and invite those from the FSSP and such, to renew the closed or restricted parishes.