The Problem of Catholic Unity (part 1) 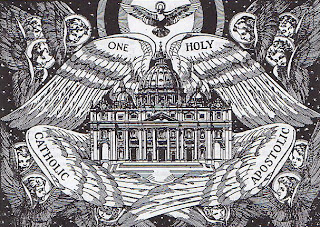 A few weeks ago, when I was dialoguing with some Protestants, one of them brought up a very good objection to the Catholic Church's oneness that I think merits special attention here. I had just finished explaining to them the concept of Unity as one of the marks of the Church and was explaining that this Unity was a metaphysical, literal unity that was based on the Trinitarian unity between the Father and the Son. As such, it is not based on any vague "consensus" on certain "essential" doctrines, and since it is vitally connected with the very life of the Trinity, it is a very real unity that cannot be represented by the 22,000 competing evangelical denominations. In essence, I had been arguing for a literal, real unity, versus the vague, spiritual unity of the Protestants.

We then went on to speak of the scandal of bad Catholics. I stated that modern American Catholics were not necessarily the best representation of the Church's perennial teaching. I explained that 75% of Catholics do not believe in the Real Presence and close to 90% do not obey the Church's teaching on contraception while countless others dissent on other issues and teach that the Church can or should change its doctrines on homosexuality, the male-only priesthood, etc. Then one of the Protestants jumped in and said, "See, the Catholic Church is in the same boat! We have 22,000 denominations that disagree. You have the same problem. Nobody in your Church agrees, only in your case, they don't physically leave the Church. Catholics don't have any more unity than Protestants."

While I of course do not admit that this difficulty calls into question the Church's real unity, it is a very good objection. Where is the Unity the Church professes in the Creed when 75-85% of her children disbelieve or dissent from her teachings? How is our unity any more real or vital than the ephemeral "unity of essentials" that the Protestants espouse? How is our professed unity any more real or enduring than the Protestants if the Catholic Church consists of a mixture of uncatechized with no connection to Tradition, dissenters who openly scoff at the Church's teachings, and "open minded" individuals who simply do not take the Church's dogmas seriously? What kind of unity is that, and where in the world do we get off boasting about unity if such is our current state?

Traditionally, the unity of the Catholic Church has been understood as a unity in belief, worship and government. In this it is much stricter than the unity demanded by Protestants. It must unite its members in unity of doctrine, expressed by external, public profession; in unity of worship, manifested chiefly in the reception of the same sacraments; and in unity of government, by which all its members are subject to and obey the same authority, which was instituted by Christ Himself.

Now, it might be objected that this unity is impossible to realize due to the varying levels of belief among different Catholics. For example, as we mentioned above, you could have a mass of non-catechized, ignorant but well-intentioned Catholics who don't know half of the Church's teachings, have no real idea why they are coming to Mass or what goes on in the liturgy and have only the vaguest interest in the spiritual life. Yet, because they are members of the Catholic Church, they participate in the Church's oneness; yet, a Protestant who studies the Bible diligently and strives for personal sanctity does not participate in the Church's oneness because he is outside the confines of the Catholic Church. Such a situation does not seem "fair", for the example of the unformed practice of the uncatechized Catholic can hardly be held up as an example of a external, public profession of the Faith. How can one profess belief in what one is ignorant of?

Here it is necessary to distinguish between the habit of faith and the object of faith. The habit of faith refers to the subjective act of faith on the part of each believer, which varies from person to person. One person's habit of faith may be very well developed and firmly rooted, while that of another may be more sketchy and without as solid foundation. It is a matter of degree, here, and theoretically there could be as many different habits of faith as there are believers. Thus, it is true that there is a great degree of variance here.

Yet, the habit of faith in the believer is distinct from the object of faith, which is the truths of the Catholic religion to which the believer gives his assent. Although it is most perfect to assent and understand to what one is assenting, perfect understanding is not necessary to make the act of faith. Faith is ultimately belief in the authority of another to say and teach things that can be trusted are true. Thus, when the simple, uneducated layman says, "I believe in the Trinity," he is not saying, "I believe and understand the Christian dogma of the Trinity," but rather, "I believe whatever the Church says is the true dogma about the Trinity." He need not understand the dogma itself; he need only assent to the Church's teaching, whatever that may be, and he has true Faith. True, this is not a perfect act of external professional in the explicit sense, but theologians speak of an implicit profession that occurs whenever a believer professes to believe whatever the Holy Catholic Church proposes for belief, whether or not he understands that teaching. Note, by the way, that no Protestant sect can ever claim or profess this sort of unity since it presupposes the existence of an authoritative teacher, which no Protestant sect can claim. Implicit profession in the objects of faith is possible only in the Catholic Church.

Thus, because the object of faith is the same for all believers, and because all believers of good will are united in assenting to the authority of the Church in proposing this teaching, there is true unity of faith, and this humble belief is truly acceptable in God's sight. St. Paul teaches, "if the willingness is there, the gift is acceptable according to what one has, not according to what he does not have" (2 Cor. 8:12).

Ah, but this presupposes that the "willingness" is there. Thus far we have established how unity remains in the case of ignorant, uncatechized Catholics who nevertheless remain in canonical good standing with the Church and go through the motions but without true understanding. We have not addressed the real problem, which is how the Church can claim a real supernatural oneness in faith, worship and government when filled with those (according to some studies, a majority) who actively dissent from the Church's teaching and can in no way be said to be uneducated or sincerely misinformed. Do the presence of these barnacles on the Barque of Peter deprive the Church of her supernatural unity? And if not, how is this any different from the ephemeral spiritual unity claimed by Protestants?

This will have to wait until next time.

Looking forward to the rest of this as such a conundrum has been oppressing me lately.

Good article. I think the overall problem with ecumenism is the Church stresses too much emphasis on dealing with collectives. Unity can be accomplished through conversion of individuals. The current strategy courts too much with the evils of diversity which the protestant world is infected with. They would love to see it adopted especially in Institutions that claim absolutes. If the Church agrees to involve itself in a format defined by every protestant church, then it conveys to the world it is not unique. There is a dignity of the Church that surpasses these who are quite
unpolitically correct, in various degrees of schism. We need to show it and keep with the traditional methods. The Holy Spirit will draw potential converts from their ranks to the Catholic door as he always has. It is here where they can be corrected as they slough off the "old person". This current all encompassing attitude attempts to spread further apart the posts of the "narrow gate" for the sake of wishful thinking, not to mention the effect of the betrayal of millions of past Catholics who trusted and strove to enter the narrow gate.