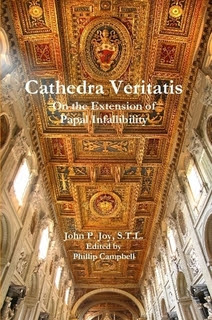 Those of you who have followed this blog for a long time remember that I originally started it as a partnership with John Joy, a friend of mine from college who took the pseudonym Anselm. Anselm posted a lot in 2007 and 2008 but gradually got too busy for blogging as he moved to Austria to work on his Master's Thesis, then his Licentiate Thesis (2012), as well as seeing to his burgeoning family. While I am bummed that Anselm no longer posts regularly, I have greater joy that as of 2012 he has gone on to obtain his S.T.L. and become a theologian proper, unlike myself, who must be contended with being a teacher by day and an armchair theologian and historian by night.

A few years ago, John's Master Thesis on St. Thomas' doctrine of the atonement was put into book form as Poena Satisfactoria, which we offered for sale here on this blog and which got very positive reviews. Now, with the conclusion of John's Licentiate studies, we are proud to offer his latest work of theological scholarship, Cathedra Veritatis: On the Extension of Papal Infallibility (157 pages, $12.99 + shipping). The book is not so much an explanation of the doctrine of papal infallibility as much as an inquiry into whether the infallibility of the pope can extend to the pope's ordinary magisterium. As John explains in the introduction:

"This work is principally concerned with the pope alone as subject of the magisterium and only insofar as he exercises a universal power. The first distinction is clear: we focus on the magisterium exercised by the pope rather than by any or all of the other bishops of the Church. But further distinctions can then be made with regard to the pope himself. The first such is between the pope as a private and as a public person. Catholic doctrine does not attribute infallibility to the pope as a private person, although this has been held by some theologians, and St Robert Bellarmine calls it a pious and probable opinion. As a public person, a further distinction is then made between the pope as a temporal ruler and as a spiritual ruler; and with regard to the latter it is only as supreme teacher in matters of faith and morals that he is infallible, not as supreme ruler in matters of discipline and government.

Finally, there is a series of further distinctions to be made within the realm of the pope’s spiritual authority in matters of faith and morals based on the scope of his teaching activity. The pope acts with a universal authority when he addresses a teaching to the whole Church, such as now frequently occurs in encyclical letters and other universally promulgated documents. However, when the pope proclaims a teaching only to the clergy or faithful of his own diocese, he acts with the particular authority of the local bishop of the diocese of Rome. Such things as papal allocutions to the cardinals or clergy of Rome, papal sermons, and general audiences addressed to the faithful of the diocese clearly fall into this category. Intermediately, when the pope addresses an encyclical letter only to a particular church or group of churches, he may be acting more precisely as patriarch of the West or primate of Italy.

The definition of papal infallibility at Vatican I only attributes infallibility to acts of the pope as supreme head of the universal Church. The pope is not declared to be infallible as patriarch of the West, primate of Italy, or local bishop of Rome. At the same time, however, neither is this positively excluded by the definition, which lacks the word ‘only’ in its enumeration of the conditions of infallibility. The infallibility of the pope in his capacity as local bishop of the particular Church of Rome (and a fortiori as primate of Italy and patriarch of the West) is certainly not a dogma of faith, nor even a Catholic doctrine, but it can be held as a free theological opinion, and indeed, there are strong arguments in its favor which can be drawn from the doctrine of the inerrancy of the particular Church of the city of Rome. Nevertheless, leaving this question aside, it should be understood that this work treats of the pope only in his capacity as supreme shepherd and teacher of the universal Church acting in relation to the universal Church. Presupposing this as the adequate subject of papal infallibility, our present investigation inquires into the extension of the infallibility of the papal magisterium with respect to its object and to its act. In method the work is partly positive and partly speculative. That is, I seek both to establish what the doctrine of the Church is and to propose arguments with respect to points not yet specifically determined by ecclesiastical authority."

Mr. Joy will go on to look at the interpretations of the definition of Vatican I, drawing on the writings of those bishops who drafted the definition, and then expand upon this by looking at Vatican II's reaffiramtion of the dogma. Various views are considered, both of orthodox theologians in good standing with the Church whose disagreement is legitimate, as well as dissenting theologians whose disdain for papal authority is more malicious. Mr. Joy's path of inquiry will lead to the conclusion that, just as the episcopal college has an ordinary exercise (universal teaching when dispersed throughout the world) and an extraordinary exercise (ecumenical council), so the pope has an exercise of his office that is both ordinary (encyclicals, etc) and extraordinary (ex cathedra definitions), and that because the pope in his person possesses the infallibility that the episcopal college possesses collectively, his ordinary definitions can be considered infallible in addition to his extraordinary pronouncements (provided they meet the criteria established in Vatican I).

Cathedra Veritatis and John Joy's first book Poena Satisfactoria on the Thomistic doctrine of the atonement can both be purchased in the Unam Sanctam Catholicam webstore.
Posted by Boniface at 10:23 PM

If I ever get a job, I promise I will donate a lot to this weblog. I was thinking the other day of how touched I myself would be if I could ever be instrumental in some way in another man's conversion to the Truth. So let me put it in print, so to speak, then, that you have been instrumental in my conversion by your balanced and sane presentation by the Faith in these difficult times. If I had never found this website, I seriously doubt that I would have ever been able to overcome my doubts and troubles.

Psalms 143:13-15 Their storehouses full, flowing out of this into that. Their sheep fruitful in young, abounding in their goings forth: Their oxen fat. There is no breach of wall, nor passage, nor crying out in their streets. They have called the people happy, that hath these things: but happy is that people whose God is the Lord.

WOW! Thanks Paul. I don't know what to say. Deo Gratias.

To echo Paul, this is my go-to website for a humble and traditional Catholic perspective on things. It's a difficult task to think with the mind of the Church even about the Church in the 21st century. I would also be interested in your thoughts on the Third Secret of Fatima if you have any.