Again: There is NO Vocations Crisis 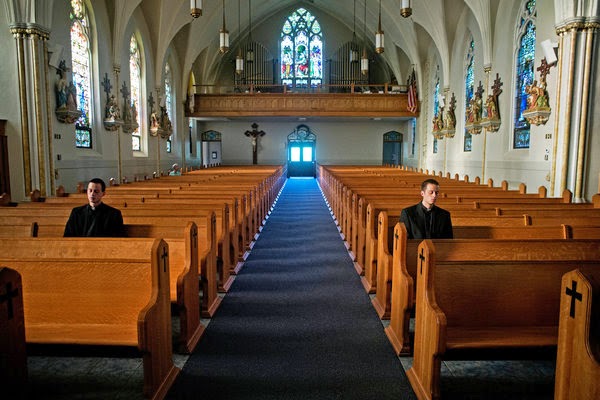 Or, to put that more specifically, there is no real vocations crisis. Certainly, there is a shortage of men seeking the priesthood, but the reasons for this are artificial and contrived. Priest shortages occur because Catholicism is being perverted, and when the idea of the Church is perverted, the role of the priest is obscured - and why would anyone want to join the priesthood when its purpose is not understood? This is why the biggest priest shortages are in those dioceses where the liberal cancer is strongest - yep, I'm looking at you, Britain and Austria.

Now, please take a moment and read this article in its entirety. These two tiny little towns have produced 80 nuns and 44 priests - and the two towns combined only have a population of 2,162! Now I know all those vocations happened gradually over the years, but just for giggles, if we do the math and divide the number of vocations by population, an astounding 5% of the population of these two villages enters priesthood or religious life. I know the statistic is not accurate, but you get the point; getting 44 priests out of two dinky towns in the post-Vatican II period is simply amazing. The Diocese of Lincoln has nothing on Fowler and Westphalia!

What is their secret?

"The houses in these two villages eight miles apart in Central Michigan are orderly, with Virgin Mary statues in front yards, American flags on front porches and unlocked front doors. Faith is the center of life, those who live here say: Everyone is Catholic, everyone is related and everyone shows up at Mass. The youth groups are active. Nearly all the students attending the prom in the villages begin the festivities by attending a regularly scheduled 4:30 p.m. Mass, dressed in their party attire. The only grade school in Westphalia is a Catholic one, and the only place of worship is a Catholic church, St. Mary’s, pictured in the city logo alongside the water tower."

Also important is that the parish does more than just give lip service to vocations:

"Most Holy Trinity hosts a weekly prayer hour dedicated to religious vocations and an annual fund-raiser to help cover tuition."


Folks, the vocations crisis is not real and has nothing to do with Catholicism per se. It has to do with a falling away of Catholicism, a rejection of Catholicism. When Catholicism is eagerly embraced and allowed to become part of culture - when it is the center of family and civic life - vocations flourish, as the examples of Fowler and Westphalia show. Imagine if this sort of thing could be reproduced in hundreds of small towns throughout the Catholic world. If we would just live our Faith - and if our leaders and clerics would just embrace the Truth - the vocations crisis would be over instantaneously.

"Pray to the Lord of the harvest to send out workers into His harvest." The Lord raises up workers for His harvest. When the harvest is no longer His, or when they work for someone other than Him, He will cease to raise up laborers. Return to the Faith, and the Spirit will do His work. "'Return to me and I will return to you,' says the Lord." (Mal 3:7).

(unrelated to the topic)

I made it. As you might have seen, I went back to the beginning and have read every blog post. You had to have noticed, having had to approve new comments on posts long inactive.

The trip was enjoyable, and I must tell you that you have an excellent blog. I will keep following it.

I am especially eager to see your review of "The Principle," though I will steel myself against disappointment. lol

Thank you for all your effort, including the obvious years of study that underlie your current work.

Very impressive, Paul - "anonymous", as you post under for some reason. ;)

I can't imagine having to read everything I've written since 2007. Seems like it'd be a chore!

Now you need to read everything on the sister site:

Bless you for your commitment!

Full disclosure: I was in the diocesan seminary for two years. At the risk of sounding like I have an axe to grind, your description of the priest shortage as being manufactured brought up unpleasant memories for me. The dioceses of California paper over their priest shortages by going to the Philippines and Mexico, hat in hand, to beg them for more seminarians. Not to detract from the service of these foreign born priests, but it's farcical that in dioceses with so many baptized Catholics we have to go overseas just to replenish the ranks. It's not a long term solution, but a stop-gap measure so that they won't have to reconsider the ways in which they have taught and lived the faith since Vatican II. A lot of money, reputations, and careers are based on doing things the current way, so the shortage will continue until our current leadership either dies off or has a radical conversion.

NYT article just an extreme example,no? Liberalism is almost across the board in most places, to varying degrees. I'm happy to see that there is a possibility of a flourish of Catholicism somewhere but let's be real.
"...When Catholicism is eagerly embraced and allowed to become part of culture ..." The same can be said of any other of the world'
s faiths. If there are a number of them, there will be an increase of faith. There is a crisis in the church. Lack of catholics will do that.