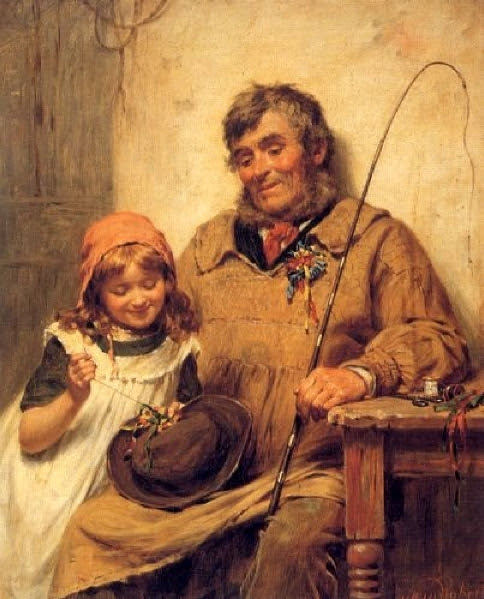 We can never repay our Fathers enough for their cooperation with God in giving us life.  No matter how we were conceived, or even their shortcomings in raising us, without them we would not exist.  It is a point worth repeating from a previous article on motherhood, that God put the 4th commandment above the 5th for a reason.  In Gods eyes, it is a more hateful thing to have contempt for those who created you, than to kill a man, because without being created you would not even exist to make decisions.

Throughout history mankind reverence for Fathers even extended beyond just paternal fathers.  In the times of chivalry, a Knight was not allowed to meet in combat the Knight who had trained him (often times this was not the paternal Father as the Father would try to find the most distinguished Knight to train his son in warfare).  Even St John Climacus in the Ladder of Divine Ascent, one of the great ascetical works from the early church, took this point to excess when he said it worst to offend our spiritual father than to offend God (his reasoning was because our spiritual Father made intercession for us before God).

How does a little boy show love for his Father?  By obeying him, learning from him, following his examples, being courteous to his friends, speaking like him and admiring his various perfections.  An older son carries the name and beliefs passed onto him (in the name of God) and strives to not shame him from departing from the instruction and good example that his Father has given him.  An adult Son seeks his advice, shows him attention, cares for him in his needs and speaks well of him to others and passes down the wisdom that he has received from him to his children.

That does not mean that the son will be a copy of the father, no Father would want a copy but rather he would want the son to be more excellent and a better man.  In becoming a better man the son gives a great honor and reward to his father for his labors in raising him.

Can we see any departure from this model proposed in our relationship with our heavenly Father? No; rather we see a more excellent version of the same thing. With the notable exception that we can never even equal to God, but even here we are told that we may do yet greater things: “Very truly I tell you, whoever believes in me will do the works I have been doing, and they will do even greater things than these”  John 14:12

Our greatest joy was when onto us a Son was born.  The best example we saw was a Son doing the will of His Father.  Our whole reason for hope in salvation is because of the Love that the Father has for the Son and the Son for the Father.

But my dearest friends, we are the adopted sons of God.  Who amongst the just is not humbled to call the holy patriarchs, prophets, apostles, saints, our fathers in faith.  But God has called us His Sons.  The confused world holds Gods law and our Fathers confession and service of him to scorn and contempt. These reeds are so shaken in the wind that they even condemn what they said yesterday let alone what our Fathers said even less than 20 years ago.  Is it any wonder that there are so many sad songs, so much rebellious rage mixed with tearing fear.  They have neither a refuge in God, their parents, nor the memories of the days of old, while Christians have a refuge in all three.

It is easy sometime as society continues to grow darker to think that we are isolated and alone.  No society has lasted long that has thrown off the natural law, and when we ignore the stories past unto us, history will repeat itself. Do not be shaken in practicing the faith of our fathers no matter how many brazen impiety, dimwit novelties and stupid theological nuances seek to destroy the faith passed on by our fathers to us.  As God did not condemn our Fathers who were faithful then he will not condemn those who are faithful to what they received.  As God did not leave the Apostles orphans he will not leave us, also his children, orphans. We are in good company when we stand with our fathers before us confessing that Apostolic Faith which has always been and always will be victorious.

Through the prayers of our Holy Fathers, Lord Jesus Christ our God, have mercy upon us and save us.
Posted by Noah Moerbeek at 12:31 AM

I wish I were a father. I suspect that I could have been a good one, but that might be pride or vainglory.

It might add a bit of direction to my life.

From the outside, it seems a bit of a privilege, actually...