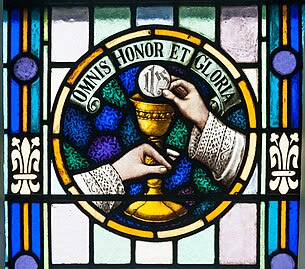 Superheroes sure have become popular today. Our superheroes today, whether they are mutants, aliens, the ultra-rich, or genetically engineered whatevers, seem to be similar to the Greek gods more and more.

One of the interesting things that many of our modern heroes have are veiled identities. Even though they are the same person, their mask in a way seems to not only amplify their character, but is a source of power to them.  When appearing in public, the mask becomes a remembrance of their past great deeds, as well as a source of fear to their enemies.

Our hearts race with affection and our minds are captivated by the tension introduced between the mask and the wearer.

I have probably already given away where I am going with this.

Has God prepared the human heart to love something hidden?  I think so.  Let's look at how a real God desires to spend His time amongst men: hidden but present under the appearance of bread and wine.   The Faith in which we see our God in Holy Communion amplifies His character, humility, long suffering, meekness, and perfect charity.

Are we captivated by the mystery of Him in Holy Communion?  When we see the Corpus, do we remember His great past deeds?

Superheroes fight their enemies, they even occasionally sacrifice themselves to save others from death. Our Lord, however, gave Himself up into the hands of those who hated Him; He suffered and died for us while we were still His enemies. Everyday He continues to offer Himself to His enemies (those priests and laity who receive Him unworthily in Holy Communion) so that He can feed the few faithful.

Is there less fervor because He doesn't sweep in and save like a superhero? There shouldn't be, as He has used His mighty power again and again throughout history.

A priest who was offering the Holy Sacrifice of the Mass in this chapel, during the consecration and elevation of the chalice, permitted himself to doubt the Real Presence of the Blood of Christ. At the same moment the image of the Crucified, which stood before him on the altar, stretched out His arm and took the chalice out of his hand. In fear he started back, repented of his doubt, and the hand of the Crucified gave him back the chalice.  Ancient Eucharistic Miracles

A woman who had lapsed in the same manner desired to open the coffer in which she kept the portion of the consecrated Bread which had been given her in the church. In times of persecution it was customary for the faithful to receive the Holy Sacrament in their hands, in order that they might take it to their houses, and, in the event of sudden capture, be so enabled to strengthen themselves. Now when that woman came to open the coffer a flame of fire issued forth, and drove her away in fear.  An Excerpt from: Ancient Eucharistic Miracles

In both of these instances, our Lord's dramatic action was to save this unfortunate woman and tempted priest from committing horrible sins.  There are more stories in our new audiobook on ancient miracles of the Blessed Sacrament that surpass the power of a superhero.  The difference, though, is this: Our Lord is animated by a desire to save our souls, while the subject of our cinematic heroes most of the time centers around saving our bodies.

I think one story from the new audiobook illustrates this particularly well: one of a priest and his two altar servers.  The altar servers are favored by a mystical visit from the Christ Child regularly whom they share their small lunch with, after several of these visits complain to the priest that the Christ Child never brought food to share.  The Priest upon hearing this tells them to ask the Christ Child if they could all dine with Him at His Father's House.  When the boys relay this request to the Christ Child, Our Lord became very happy and told them the date at which they would all dine together.  Needless to say after celebrating Mass on that day, the three companions while having their heads bowed in prayer, died a most happy and peaceful death.

Superheroes in our movies can perhaps delay our deaths through saving us from disaster, but they do not conquer death like Christ. Perhaps that is why the world loves superheroes so much, because the modern superhero's mission is to of prevent death. Death, the thing that mankind with a guilty conscience fears so much.

You and I, dear reader, have been called to a greater mission than saving the world: to join with Christ in saving souls; we must assist in saving souls from eternal death.  To save our life we must lose it, to become godly heroes we must not embrace ourselves, but Christ.

O Eucharistic Heart of Jesus, Make Our Hearts Like unto Thine.