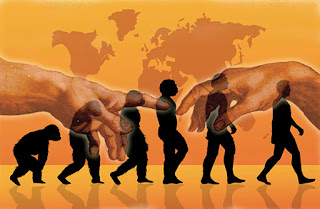 Some time ago I was graciously provided with a review copy of Creation, Evolution, and Catholicism: A Discussion for Those Who Believe by Thomas McFadden.

At the heart of Creation, Evolution, and Catholicism is the idea that, while theistic creation "works" for some Catholics, it certainly does not "work" for everybody. Because many mainstream Catholics have adopted the position that there's "no contradiction" between evolution and Catholic theology, it has become accepted to assume there are no real problems with theistic evolution. Consequently, there is little real discussion about the question, and Catholics who do not find an easy harmony between Scripture and evolution are left with little to go on.

It is into this breach that Mr. McFadden steps with his book. Creation, Evolution, and Catholicism is dedicated to examining the concept of evolution - especially theistic but also atheistic - addressing the issue from a point of view of science but also theology. The 149 page book is easy to read, broken up into seventeen chapters with many small subheadings addressing various points of science and theology. The Big Bang, DNA, vestigial structures, fossil remains, and much more are all covered, as are the theories of major evolutionary proponents, both Catholic and secularist. This alone would make this book very helpful, although it should be pointed out that none of these topics are covered in an extremely exhaustive manner; the author addresses them by summarizing the main arguments and then pointing to additional resources for further study.

Thus the book is a kind of helpful "go to" guide to find resources on each particular issue. It demonstrates that the fundamental problem is that most Catholics have adopted the premises of naturalism; even when engaging the Faith with an intent to defend it, they often begin with assumptions taken from naturalism (for example, Cardinal Pell's embarrassing exchange with Richard Dawkins). Naturalism has become a kind of monkey on the Church's back, related directly to a continued loss of faith. McFadden presents some convincing statistics demonstrating the relationship between acceptance of evolution and loss of faith. Again, it is clear that just because theistic evolution "works" for some does not mean it "works" for everyone; in fact, based on the statistics McFadden presents, it does not "work" for the majority of Catholics.

But I think the greatest asset of this book was in its chapter on Humani Generis. It is widely known that Humani Generis, Pius XII's 1950 encyclical, remains the last authoritative statement of the Magisterium on evolution. It is often repeated that this encyclical "allowed" Catholics to believe in theistic evolution of a preexisting human body so long as they maintained some other points (reality of original sin, special creation of the soul). This encyclical allegedly "opened the door" for the acceptance of theistic evolution within Catholicism.

Mr. McFadden strongly disputes this point. Through a rigorous analysis of the text and the meanings of different terms employed by Pius, he demonstrates that Pius XII never intended the broad acceptance of theistic evolution among Catholics, nor did he "permit" it to be held as a viable theory of human origins. I will not recapitulate Mr. McFadden's arguments here, but it suffices to say that it was refreshing to read something that actually dug into the text of Pius XII rather than just repeating what others have said.

The book is written in the form of a handbook. It is not what one would call publisher grade printing; it is a very hardy spiral bound, good for duplication, study, and note taking. Mr. McFadden has told me that he hopes this book will find its way into the hands of pastors and catechists - that is, that it will become a tool to be used at the parish level to equip those tasked with passing on the Faith with the answers they need to teach the Church's doctrine uncontaminated by naturalist assumptions. To this end, Mr. McFadden is making his book available at cost ($10 for a hard copy, $4 for a digital copy via CD); I do not know if he is making PDF versions available. There is no website for the book; it must be requested and ordered by contacting the author at: scienceandcatholicism@gmail.com. Mr. McFadden has also organized the book printing and distribution through a 501(c)(3) group called the Institute for Science and Catholicism, so donations for the book can be written off.

There's also a really nice appendix on John Paul II and the Galileo case, which McFadden believes (rightly, in my opinion) is one of the historical episodes that cripples Catholics and makes them too tentative to engage naturalism.

If there is one issue I took with the book - and I say this tentatively because there is so much other good stuff in here - it is that the author will often cite Cardinal Ratzinger/Benedict XVI as a support for traditional Creationism against evolution. It is my opinion that McFadden misunderstood what Benedict is saying (which is easy to do, as Benedict is extremely nuanced in his verbiage). Benedict does oppose the kind of evolutionary compromise represented by Humani Generis; but this is not because Benedict supported Creationism, rather because he affirmed something more Teilhardian and more evolutionary than the Humani Generis compromise. Theistic evolution was not too evolutionary or Benedict; rather it was not evolutionary enough. We have documented this in our article Pius XII, Teilhard, and Ratzinger.

But, as the author pointed out to me when I discussed this with him, even if this is the case, the statements of Benedict against evolution still hold value on their own, even if Benedict's own position is problematic. Benedict is a potent adversary against a simplistic theistic evolution, despite his own theological baggage. I would certainly still recommend the book. Mr. McFadden has done the Church an excellent service. Anyone interested in the debate about evolution should get a copy of this work, especially those involved in catechesis at the parish level. I plan on hanging on to this book and have already pulled it out for reference in my private reading several times.

I also recommend our article Solemn Enthronement of Evolution, as well as James Larson's article The Quintessential Evolutionist.
Posted by Boniface at 4:52 PM

Reconciling doctrines and dogmas with the evolutionary worldview is not the main problem. Even if that is done, it is then clear that the Church has changed her teaching about doctrines of the greatest importance, e.g. Original Sin, Adam and Eve, creation of Eve from Adam's side, the Fall etc. Or in stronger terms: the Church has taught error for 1800 years and/or didn't understand it's own teachings, with the apparent conclusion the Holy Spirit does not guide the Church in it's teaching. It is this latter conclusion which causes a loss of Faith. Sooner or later the Church is going to have to explicitly come to terms with this.


Once again you have corrected my misunderstanding. Having read years ago things by Catholic scholars that Humani Generis gave Catholics permission to accept evolution with clear reservations, I assumed the question was settled. Evidently not. Recently you posted a piece on Bishop Barron. And that he plays fast and loose with the church's doctrine of Christology. Michael Voris took then Fr. Barron to task for his speculation on the possibility of universal salvation. I wondered if Michael had gotten trapped in reductionism. But I guess not based on your post even though you addressed different concerns. It's amazing how so many seminaries insidiously corrupt otherwise good and faithful priests.

Just finished reading this book and it was great!

You obviously didn't read the article. The author is saying evolutionary theory is incompatible with Christianity.