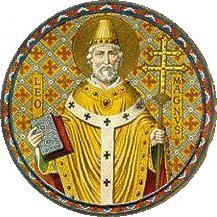 Merry Christmas, and blessings to you and yours going in to 2016. As we celebrate the Octave of our Lord's Incarnation, let us nourish our souls with the words of the very venerable St. Leo the Great, whose famous Letter 28 to Flavian of Constantinople, known as his "Tome", set forth the correct doctrine of our Lord's dual nature against the errors of the heretic Eutyches. It was upon hearing the words of this great pope that the fathers of the Council of Ephesus in 451 arose and exclaimed, "This is the faith of the fathers! This is the faith of the Apostles! So we all believe!...Peter has spoken thus through Leo!”

"It was perhaps that [Eutyches] thought that our lord Jesus Christ did not have our nature because the angel who was sent to the blessed Mary said, "The holy Spirit will come upon you and the power of the most High will overshadow you, and so that which will be born holy out of you will be called Son of God," as if it was because the conception by the virgin was worked by God that the flesh of the one conceived did not share the nature of her who conceived it? But uniquely wondrous and wondrously unique as that act of generation was, it is not to be understood as though the proper character of its kind was taken away by the sheer novelty of its creation. It was the holy Spirit that made the virgin pregnant, but the reality of the body derived from body. As "Wisdom built a house for herself," "the Word was made flesh and dwelt amongst us": that is, in that flesh which he derived from human kind and which he animated with the spirit of a rational life.

So the proper character of both natures was maintained and came together in a single person. Lowliness was taken up by majesty, weakness by strength, mortality by eternity. To pay off the debt of our state, invulnerable nature was united to a nature that could suffer; so that in a way that corresponded to the remedies we needed, one and the same mediator between God and humanity the man Christ Jesus, could both on the one hand die and on the other be incapable of death. Thus was true God born in the undiminished and perfect nature of a true man, complete in what is his and complete in what is ours. By "ours" we mean what the Creator established in us from the beginning and what he took upon himself to restore. There was in the Saviour no trace of the things which the Deceiver brought upon us, and to which deceived humanity gave admittance. His subjection to human weaknesses in common with us did not mean that he shared our sins. He took on the form of a servant without the defilement of sin, thereby enhancing the human and not diminishing the divine. For that self-emptying whereby the Invisible rendered himself visible, and the Creator and Lord of all things chose to join the ranks of mortals, spelled no failure of power: it was an act of merciful favour. So the one who retained the form of God when he made humanity, was made man in the form of a servant. Each nature kept its proper character without loss; and just as the form of God does not take away the form of a servant, so the form of a servant does not detract from the form of God.

It was the devil's boast that humanity had been deceived by his trickery and so had lost the gifts God had given it; and that it had been stripped of the endowment of immortality and so was subject to the harsh sentence of death. He also boasted that, sunk as he was in evil, he himself derived some consolation from having a partner in crime; and that God had been forced by the principle of justice to alter his verdict on humanity, which he had created in such an honourable state. All this called for the realisation of a secret plan whereby the unalterable God, whose will is indistinguishable from his goodness, might bring the original realisation of his kindness towards us to completion by means of a more hidden mystery, and whereby humanity, which had been led into a state of sin by the craftiness of the devil, might be prevented from perishing contrary to the purpose of God.

So without leaving his Father's glory behind, the Son of God comes down from his heavenly throne and enters the depths of our world, born in an unprecedented order by an unprecedented kind of birth. In an unprecedented order, because one who is invisible at his own level was made visible at ours. The ungraspable willed to be grasped. Whilst remaining pre-existent, he begins to exist in time. The Lord of the universe veiled his measureless majesty and took on a servant's form. The God who knew no suffering did not despise becoming a suffering man, and, deathless as he is, to be subject to the laws of death. By an unprecedented kind of birth, because it was inviolable virginity which supplied the material flesh without experiencing sexual desire. What was taken from the mother of the Lord was the nature without the guilt [of original sin]. And the fact that the birth was miraculous does not imply that in the lord Jesus Christ, born from the virgin's womb, the nature is different from ours. The same one is true God and true man."