How Goodwill Was Squandered 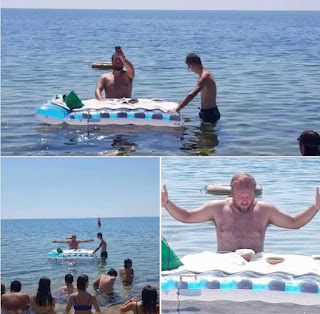 This week our eyes were graced with the scandalous spectacle of Father Mattia Bernasconi, vicar of the pastoral care for young people of the parish of San Luigi Gonzaga in Milan, celebrating Mass on an air mattress in the water at the beach at Alfieri in Italy's Crotone region—for no reason save that "it was hot." The source for the story can be found here.
I do not draw attention to this for the purposes of making another tired old "Look how bad the Novus Ordo is" post. We all know how bad the Novus Ordo can be. And besides, if the source is to believed, this Mass was in the Ambrosian Rite, not the Novus Ordo.
The purpose, rather, is to call this episode as witness to why traditional Catholics do not trust the modern hierarchy when it comes to safeguarding the integrity of the liturgy—of any liturgy. This Mass is the reason why nobody believes Pope Francis when he asked bishops "to be vigilant in ensuring that every liturgy be celebrated with decorum and fidelity to the liturgical books promulgated after Vatican Council II, without the eccentricities that can easily degenerate into abuses." This is why Pope Benedict's statements that the liturgy "cannot be created or amended by the individual community or by experts, but must be faithful to the forms of the universal Church" elicited only yawns, or why his post-synodal exhortation that priest demonstrate "attentiveness and fidelity to the specific structure of the rite" was a dead letter; why nothing changed after John Paul II called liturgical abuse "a source of suffering for many" and argued forcefully that "liturgy is never anyone's private property, be it of the celebrant or of the community in which the mysteries are celebrated...No one is permitted to undervalue the mystery entrusted to our hands: it is too great for anyone to feel free to treat it lightly and with disregard for its sacredness and its universality." It is why, despite the CDW's prohibition of liturgical dance back in 1975, it continues to this day.
The reason is, no matter what is said about the dignity of the liturgy, nothing ever changes. Nobody in the Church is actually going to do anything about the abuses endemic throughout the Novus Ordo. Nobody reprimanded Cardinal Schönborn—editor of the Catechism—for having an irreverent balloon Mass in Vienna. Nobody disciplined the Detroit priest who had a Detroit Red Wings logo stitched onto his vestments and intoned the scores of a hockey game during Mass. The priests who handed out Holy Communion in sandwich bags for people to take home during Covid will not be disciplined. Nobody from any Vatican dicastery or diocesan office will ever lift a finger to stop the guitars, the balloons, the banners, and all the other clown-world abominations found throughout the Latin rite. All the talk about liturgical decorum and fidelity is about as vacuous as an American politician talking about balancing the budget.
As a thought experiment, suppose this history had all unfolded differently. Suppose that the Novus Ordo was still implemented in 1970, but imagine the Church authorities were as rigorous in enforcing its rubrics as they are in suppressing the Latin Mass. Imagine they punished liturgical abusers, quashed innovations like communion in the hand, altar girls, etc.; imagine episcopal conferences reaffirming ad orientem worship and mandating the study and use of Latin, as Vatican II specifically ordered. Imagine diocesan training offered in Gregorian Chant and a broad prohibition of secular styles and instruments as envisioned by Pius X in Tra le sollecitudine. Imagine communion kneeling on the tongue was the norm throughout the west. In short, imagine that the elusive "reverent Novus Ordo" was, in fact, the status quo instead of the unicorn it now is.
In such circumstances, the loss of the Traditional Latin Mass would still be tragic. There would still be a traditional movement advocating for the TLM and arguing for its restoration. But—and I think this is the essential difference—there would be a lot more goodwill between traditional Catholics and the hierarchy, simply because we would all know the authorities were serious when they spoke of correcting liturgical abuses and trying to maintain a sense of reverence. The dynamic between the TLM and NO could have been very different if Benedict XVI and John Paul II had taken substantial action to correct abuses.

Of course, that is a pipe dream. The fact is, the leadership in the Church does not care about reverent liturgy or suppressing abuse; they only care about suppressing the Traditional Latin Mass. So whenever an attack on the traditional Mass is accompanied by panegyrics about the importance of preserving decorum in Novus Ordo as well, nobody believes it. The hypocrisy is palpable. Fr. Mattia Bernasconi is not going to be disciplined; or, if he is, it will be a slap on the wrist (although, I have heard this priest actually got in trouble with the civil authorities for offending religious sensibilities; what a strange world!)

Once again, if traditionalists are skeptical about the goodwill of the hierarchy, it is not because we are simply mean or nasty; it is because the ecclesiastical authorities have systematically dismantled that goodwill over the last fifty years and continue to do so to this day.
Posted by Boniface at 4:53 PM

It surely was a Novus Ordo, just not of Roman, but of Ambrosian rite. The latter, too, has been reformed.

Did that come out as intended?

Haha oops no. Thanks for the catch. Should be ad orientam