Ark of the Covenant: Under the Temple Mount? 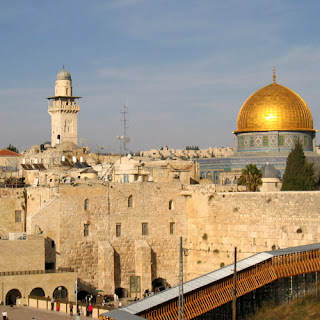 Continuing our series from last week on the whereabouts of the Ark of the Covenant, we come to the second possibility of our four theories: that the Ark is buried beneath the Temple Mount in Jerusalem. This view is adhered to primarily by Zionists, extremely pro-Israel Evangelical Protestants and certain orthodox Jews. According to this theory, the Ark has rested in a secret vault beneath the Temple Mound (in fact, beneath the exact spot of the Holy of Holies) since the days just before the Babylonian capture of Jerusalem in 586 BC. I call this the Zionist Theory.

The evidence for this theory is that the Ark was the holiest object in the ancient world, and could only therefore rest in a hoyl place. It's proper place was the Holy of Holies. However, knowing the Babylonians were coming to destroy the Temple, the Jews decided to hide it. However, wherever they hid it had to be sacred, consecrated ground. Now, according to Jewish theology, the sacredness of a space extends not only to its two-dimensional borders but to its ultimate spatial extent. Thus, all of the air and sky directly above the Holy of Holies and all the ground beneath it down to the center of the earth are just as holy as the sanctuary. Thus, the theory goes, the priests (or some say Solomon) had a chamber dug under the Holy of Holies in the event that someday the Ark would need to be hidden there.

Shortly before the Babylonian captivity, the Ark was removed and hidden in this chamber. Then, all of the priests who knew of its whereabouts were slain or died in exile, leaving the entrance to the secret chamber a mystery. Jer. 52:24 mentions that Nebuzaradan the captain of the guard captured "Seraiah the chief priest, and Zephaniah the second priest, and the three keepers of the threshold...and brought them to the King of Babylon at Riblah. And the king of Babylon struck them, and put them to death at Riblah in the land of Hamath." Now, if the chief priests and the keepers of the threshold were all executed, would anybody be left to know where the Ark was taken?

The idea that the Ark is under the Temple Mount also found support in the work of two Israeli archaeologists, Shlomo Goren and Yehuda Getz, also Rabbis. They were digging secretly in a tunnel beneath the Temple Mount when they noticed some water seeping through a wall. The wall was removed, revealing a valuted chamber with the sealed entrance to another chamber below it. This chamber, the rabbis beleive, held the Ark. However, when the Moslems discovered that there were diggings being conducted under the Dome of the Rock, they threatened a general riot and the diggings were stopped. The rabbi explains that, for the sake of maintaining peace with their Moslem neighbors, the Israelis had to reseal the entrance to the tunnel, and it remains blocked up to this day.

Another reason Rabbi Getz said that no attempt was made to remove the Ark was that there was no one in the proper state of ritual purification able to move it, especially since the Temple Mount was dominated by Gentiles; ie, they had no one who could touch it without being struck dead. Thus they are content to leave it sit until the coming of the Messiah.

This theory, though very popular among Protestants, I find problematic for several reasons.

1) As we discussed last time, the Ark was missing at least 25 years before the Babylonian captivity.

2) It is based on theological reasoning: that the Ark must be in a place as sacred as the Holy of Holies. There is no historical evidence that the Ark was ever taken to any underground chamber.

3) Furthermore, we know that it is not necessarily true that the Ark has to be somewhere sacred. We know that it rested in the house of Obed-Edom the Gittite for three month in the Old Testament. Not only was nobody cursed or struck dead for it, but "the Lord blessed Obed-Edom and all his household" (2 Sam. 6:11). The Scriptures never said that the earth could not touch the dirty ground, only that it could not touch sinful flesh.

4) The Templar Knights, when the Temple Mount was in their exclusive possession during the Crusades, did a series of excavations beneath the site of the Temple and found nothing.

5) Rabbi Getz and Rabbi Goren have not said how they knew that the Ark was in the chamber, only that they were "certain." Furthermore, their work is tied up with Israeli-Palestinian politics and the desire to build a Third Temple. Thus, it is in their political best interest to have the Ark located beneath the Temple Mount.

6) The excuse of Rabbi Getz as to why they didn't make more of an effort to retrieve the Ark (that there was no one holy enough to move it) seems suspect. There exists the modern technology to dig the Ark out and transport it without any human having to touch it.

This theory, which I call the Zionist Theory, is very controversial because, if it were true, it gives Jews a strong claim to parts of the Temple Mount. Most adherents of this view support the idea of building a Third Temple on the Mount and reinstituting animal sacrifice according to Old Testament regulations. Zionist Jews and Protestants are among these supporters; on the other hand, Catholic tradition has always seen the rebuilding of the Temple as a sign of antichrist (as in the well known story of Julian the Apostate's attempt to rebuild it in the mid-4th century).

This theory's main weakness is that it is based on a series of theological assumptions with little history to back them up, and even the assumptions themselves are questionable.

For the previous article in this series, click here.

Next time: Did Jeremiah hide the Ark on Mt. Nebo?
Posted by Boniface at 3:27 PM

They found the Ark of the Covenant where Moses placed the 10 Commandments, in a cave under Golgotha.

Are you the same guy from the other post promoting Ron Wyatt's shoddy archaeology?

Ron Wyatt makes sense to me.