The Cure d'Ars on Modernism 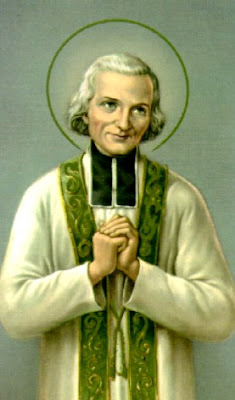 The Cure d'Ars, St. John Vianney, is one of my favorite modern saints. Anyone who has read his fiery sermons, heard of his personal battles with demonic forces in the Ars rectory in the evening, or admired his wit and sagacity (notwithstanding his lack of formal education) cannot have anything but admiration and gratitude for this humble saint and patron of parish priests.

The saints often have a supernatural insight into the things of God, and though they may not always have mystical revelations like Teresa of Avila or Hildegard of Bingen, they always have a poignant and succint way of phrasing deep truths that are at once simple and profound. The following story from the life of the Cure d'Ars is one of my favorites. It is paraphrased from the work The Cure of Ars Today by Fr. George Rutler.
As the fame of the humble priest of Ars had spread throughout all of France, many people of all states in life flocked to hear him preach. Priests came from miles around to get advice from the saintly Cure, and lay people turned Ars into a virtual pilgrimage sight. In those days (c. 1845), Modernism had just begun to rear its ugly head in the Church. Mens minds had been infected with the errors of the French Revolution and in 1848 there had been socialist-atheist uprisings throughout Europe. St. John Vianney seemed unmoved by all of this, however, and his life of penance, prayer and preaching went on as usual at Ars.
One day, a certain theologian came to speak with Father Vianney. The Cure, always welcoming to anyone who desired to see him, met gladly with the young theologian and walked with him around the parish grounds. While they walked, the young theologian began explaining all of the modernist theories of biblical criticism, the new morality and all of the other ideas popular in the universities of the day. Fr. Vianney walked slowly, listening intently and nodding his head as he listened to the young theologian expound the novel doctrines. When the young man finally finished, the Cure of Ars stopped and put his hand lovingly on the young man's shoulder. Then, with heartfelt charity and a great big smile, he said to him, "My friend, you are an idiot." Then he bid the young man farewell and returned to his parish.
C.S. Lewis in Screwtape Letters says the one thing that the devil hates most is mockery because it refuses to take him seriously. I think the same thing is true of modernism! We ought to view modernism the way it views orthodoxy: as a bizarre aberration and something not worth serious scholarly debate; something held by "idiots." The greatest saints of the modern era, like John Vianney, Padre Pio and Maximilian Kolbe, do not so much act offended by modernism as confused. In their single hearted devotion to God, they are confused why anybody who calls themself a Catholic would betray the faith. Somebody once told Padre Pio, near the end of his life, about all of the liturgical innovations being practiced in certain places. He shook his head in confusion and said, "Why would anybody do such a thing?" He truly didn't understand why anybody would want to tamper with the liturgy! This attitude ought to be ours as well: humble confusion!
Posted by Boniface at 12:17 PM

Great story! I had never heard that before. Truly a lesson for us all.

Where did you get the Padre Pio information from? I am always interested in reading his reaction to the liturgical revolutions that were happening in the 60s.

The Padre Pio comment comes from a book called "Padre Pio the Wonder-Worker" or something like that that is available in most Catholic bookstores.