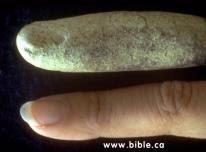 A fossilized human finger. According to evolutionary science, humans have not been on the earth long enough for their remains to become fossilized, a process that is supposed to take millions of years.

A fossilized foot inside of a non-fossilized boot. I didn't know they had boots 60 million years ago!

As a skeptic of evolution, I was very surprised (and delighted!) to find the following passages in a book on prehistoric Europe I am currently reading. I would not have been surprised if this passage had been in a book skeptical of evolution, but this book, Exploring Prehistoric Europe by Dr. Chris Scarre, Deputy Director of the McDonald Institute for Archaeological Research at the University of Cambridge, UK, is a solid, pro-evolutionary piece of work. Nevertheless, check out this paragraph on what the author says on crabon dating [my commentary in red] (pg. 2-3):

"Since the Second World War, the dating of archaeological sites has been revolutionized by the invention of absolute dating techniques. These make it possible to go beyond labeling things "Early Neolithic" or "Late Bronze Age" and give them instead an accurate age expressed in calendar years [okay, so he has just asserted that these new dating techniques are "accurate." Keep that in mind.]

The most famous of these new dating methods is radiocarbon dating, based on the decay of the radiocarbon isotope carbon-14. Any material that contains carbon, such as wood, bone or charcoal, can be dated by this means. Since its invention in the late 1940's, the method has undergone a series of refinements. One of them takes account of the discovery that the amount of naturally occuring carbon-14 in the atmosphere varies from time to time in response to fluctuations in solar radiation [in other words, it throws off their calculations]. This means that "crude" radiocarbon dates have to be "corrected" in order to arrive at accurate calendar ages [wait a minute, if you are carbon dating in order to find the age, how can you "correct" your findings when you don't yet know the age of the object in question? And what will you base your correction on, since if carbon amounts "fluctuate" throughout time, how will you know how much was in the atmosphere in, say, 10,000 BC? If you do not know that, how can you "correct" your findings?] All the radiocarbon dates quoted in this book have been corrected in that way, except those relating to the Paleolithic (over 10,000 years ago), for which no correction has yet been devised [so, for anything over 10,000 years, there is "no correction" for the admitted fluctuations in carbon-14 dating. Remember this].

A second problem is precision. Corrected radiocarbon dates are generally accurate-they point to the right place on the right timescale-but they are by nature imprecise-they don't give an individual year date, but a time bracket. Some of the early radiocarbon dates had ranges extending over hundreds of years, but most recent dates are precise to within a century or so. It still happens, however, that radiocarbon dates for events that are known to be successive can overlap, owing to their imprecision. The imprecision becomes greater the further back in time we go, until around 40,000 years ago when radiocarbon dating reaches its upper limit ["reaches its upper limit?" "40,000 years ago"? So, essentially you cannot date anything older than 40,000 years with any sort of accuracy, and even past 10,000 years there is "no correction" for the inaccuracies of the method. From whence comes these dates saying that man evolved a million years ago, that dinosaurs died 65 million years ago, and so on? If anything over 40,000 years is past carbon dating's "upper limit", then what the heck are scientists doing trying to offer dates for stuff before that?]."

This, however, does not stop this professor from in the very next chapter going on to talk about the Paleolithic settlements at Terra Amata, France, which he dates at 380,000 years old. Later in the book, on his chapter on the rock carvings of Coa, Portugal, he says this about attempts to date the rock:

"The first set of carbon dates showed the engravings might well be Paleolithic, and were certainly over two-thousand years old, while the second set suggested they were under two-thousand years old! Studies of erosion gave an age of up to 6,500 years, and measures of chlorine-36 (produced by the action of cosmic rays on the exposed rock) showed that the rock surface had been exposed for over 100,000 years. In sum, the whole exercise was a failure, and none of the methods provided a clear and reliable date. But there is certainly nothing about them to make us abandon the generally held view that many Coa engravings are Upper Paleolithic"

Amazing! He did say that other methods besides carbon-14 were used, but admitted that they were all contradictory, that "the whole exercise was a failure, and none of the methods provided a clear and reliable date." But then he just throws out all of the evidence and says that we should not take it into consideration when assuming that it is Upper Paleolithic (ie, older than 10,000 years). Basically, he is asserting that (1) the scientists came to the site with a pre-conceived notion that it was older than 10,000 years, (2) they tested just to confirm their preexisting notion, (3) the testing failed to confirm their notion that it was definitely older than 10,000 years, (4) so they chucked out the testing and held to their assumption anyway. Now, is that proper scientific method?

Remember this next time some scientist is claiming that stuff they have dated is so many "millions" of years old. They have no clue; by this author's admission, nothing older than 40,000 years is accurate anyway, and none of the other types of dating tests can provide a reliable date. This should demonstrate to you that the supposed "evidence" for evolution is not as strong as it first seems.

I was just thinking about the accuracy of carbon dating the other day. Thanks for posting.

Hi,
While I see that your post is from last year, I had to comment anyway. Thanks for posting this article; I've been trying to find some information to prove to a freind of mine that you can't really go by carbon dating. Great post!

Thanks for the compliments!

Unless you can provide any shred of evidence for your point of view you cannot comment.

Ha...I love it when people say stuff like this. Actually, I can comment on whatever I want, with or without evidence. It's my blog.

However, I was pointing out that the scientist quoted in the post himself says carbon dating is inaccurate. This was all the "evidence" I meant to give.