Today (September 14th, 2007) is the implementation of the Holy Father's Motu Proprio Summorum Pontificum. This is a wonderful day for the Church and ought to be celebrated appropriately: smoking cigars, raising toasts to Benedict XVI, blessing Our Lady, immersing ourselves in Gregorian Chant, and burning Bugnini in effigy (well, maybe not the last one).
This would be the third time that a great historic event happened on the Feast of the Exaltation of the Holy Cross. The feast was instituted to commemorate the finding of the True Cross in Jerusalem by St. Helena in the year 325. As the historian Socrates Scholasticus says in his Historia Ecclesiastica, Chapter XVII:
Helena, the emperor's mother (from whose name having made Drepanum, once a village, a city, the emperor called it Helenopolis), being divinely directed by dreams went to Jerusalem. Finding that which was once Jerusalem, desolate `as a Preserve for autumnal fruits,' according to the prophet, she sought carefully the sepulchre of Christ, from which he arose after his burial; and after much difficulty, by God's help she discovered it. What the cause of the difficulty was I will explain in a few words.
Those who embraced the Christian faith, after the period of his passion, greatly venerated this tomb; but those who hated Christianity, having covered the spot with a mound of earth, erected on it a temple to Venus, and set up her image there, not caring for the memory of the place. This succeeded for a long time; and it became known to the emperor's mother. Accordingly she having caused the statue to be thrown down, the earth to be removed, and the ground entirely cleared, found three crosses in the sepulchre: one of these was that blessed cross on which Christ had hung, the other two were those on which the two thieves that were crucified with him had died. With these was also found the tablet of Pilate, on which he had inscribed in various characters, that the Christ who was crucified was king of the Jews. Since, however, it was doubtful which was the cross they were in search of, the emperor's mother was not a little distressed; but from this trouble the bishop of Jerusalem, Macarius, shortly relieved her. And he solved the doubt by faith, for he sought a sign from God and obtained it. 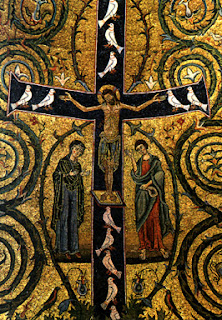 The sign was this: a certain woman of the neighborhood, who had been long afflicted with disease, was now just at the point of death; the bishop therefore arranged it so that each of the crosses should be brought to the dying woman, believing that she would be healed on touching the precious cross. Nor was he disappointed in his expectation: for the two crosses having been applied which were not the Lord's, the woman still continued in a dying state; but when the third, which was the true cross, touched her, she was immediately healed, and recovered her former strength. In this manner then was the genuine cross discovered. The emperor's mother erected over the place of the sepulchre a magnificent church, and named it New Jerusalem, having built it facing that old and deserted city. There she left a portion of the cross, enclosed in a silver case, as a memorial to those who might wish to see it: the other part she sent to the emperor, who being persuaded that the city would be perfectly secure where that relic should be preserved, privately enclosed it in his own statue, which stands on a large column of porphyry in the forum called Constantine's at Constantinople.
Now, those who are sons of St. Franics (myself included, since he is my Confirmation saint), know also that this day commemorates the day St. Francis received the first stigmata on Mount LaVerna. Bonaventure records that this took place on the Feast of the Exaltation of the Holy Cross. Celano, though he fails to mention the feast day, records that:
Two years before Francis gave his soul back to heaven, while he was staying in a hermitage called Alverna after the place where it was located, he saw in a vision from God a man with six wings like a seraph, standing above him with hands extended and feet together, affixed to a cross. Two wings were raised over his head, two were extended in flight, and two hid his entire body.
When the blessed servant of God saw these things he was filled with wonder, but he did not know what the vision meant. He rejoiced greatly in the benign and gracious expression with which he saw himself regarded by the seraph, whose beauty was indescribable; yet he was alarmed by the fact that the seraph was affixed to the cross and was suffering terribly. Thus Francis rose, one might say, sad and happy, joy and grief alternating in him. He wondered anxiously what this vision could mean, and his soul was uneasy as it searched for understanding. And as his understanding sought in vain for an explanation and his heart was filled with perplexity at the great novelty of this vision, the marks of nails began to appear in his hands and feet, just as he had seen them slightly earlier in the crucified man above him.
His hands and feet seemed to be pierced by nails, with the heads of the nails appearing in the palms of his hands and on the upper sides of his feet, the points appearing on the other side. The marks were round on the palm of each hand but elongated on the other side, and small pieces of flesh jutting out from the rest took on the appearance of the nail-ends, bent and driven back. In the same way the marks of nails were impressed on his feet and projected beyond the rest of the flesh. Moreover, his right side had a large wound as if it had been pierced with a spear, and it often bled so that his tunic and trousers were soaked with his sacred blood.
May the prayers of St. Helena, St. Francis, and merits of Christ be with the Church on this holy day! Let the Cross be exalted till its glory fills the whole earth.
Adoramus te, christe, et benedicimus tibi, quia per crucem tuam redemisti mundum. O Crux, ave spes unica!
Posted by Boniface at 10:00 PM