It recently dawned on me that not only in the liturgical life of the Catholic Church, but also in its apostolates and social life have many of its characteristics become Protestantized. Take Youth Groups, for example. They are entirely a Protestant notion, without foundation in any tradition of the Church. No Catholic Church had a "Youth Group" or a "Youth Director" (or worse yet, "Youth Minister") prior to the Second Vatican Council. If they did, it certainly wasn't along the lines they have now.Don't get me wrong, the Church certainly had organizations for the youth, but they were by no means the organic predecessors of the sorry Youth Groups we have today.

What is so Protestant about our Youth Groups? By the way, I am not denying that there are many good Catholic youth groups that exist out there. As a Youth Director myself, I am not offering a blanket condemnation of all Youth Groups; I am asserting that the predominant form or prototype for the modern Catholic Youth Group is Protestant in essence.

First of all, the fact that they have both sexes mingling together. This was absolutely never undertaken in the pre-Conciliar Church. There were separate groups for boys, and separate groups for girls. The pre-Conciliar authorities had the common sense to realize that boys and girls cannot focus on spiritual growth if they are thrown in a room together to gawk and flirt with each other at a biological time in their life when their hormones are out of control. This is not necessarily Protestant, but since this sort of thing started in Protestant youth organizations and only later seeped into the Church, I will call it so.

Also, like everything else about Protestantism, modern Catholic Youth Groups seemed to be bent on entertaining kids and making them feel good rather than in spiritually forming them. There is more emphasis on "team work", "life skills" and on "creating a welcoming environment" than on instilling Catholic virtue. Perhaps this is the point of the useless proliferation of trite games and ice-breakers that are done in Youth Groups around the world today. Some may argue that at least it keeps our kids off the streets and out of drugs. Perhaps. But let me point out two things:

(1) Just because a kid comes to Youth Group once a week does not mean he will not do drugs or make bad choices the other six days of the week, and

(2) Even if it does keep him off drugs and out of trouble, that is insufficient. Youth programs, imaging what Christ did for us, must not just save us from something but save us for or to something: the instilling of Catholic virtue and mature faith. But modern Youth programs do not care about raising up sound Catholics; they care about making it entertaining so more kids will come so their numbers will be up so they can brag about what a vibrant Youth Group they have. I'm sure many Catholic Youth Director's do not care about the numbers, but there is an overemphasis on entertainment and feeling. The nationwide NCYC (National Catholic Youth Conference) abomination is an example of this. 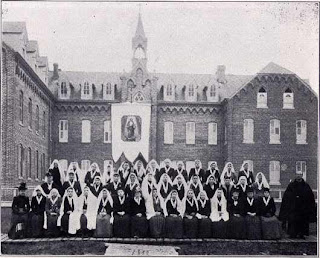 Third, modern Youth Groups are always run by lay people; in the old days, always a priest (if male) or a sister (if female) ran the Youth organization. Granted, this has to do with the alleged vocations crisis (which is more a crisis in catechesis and formation than in willing men) and until there are more priests around, there is not much that can be done about it. But it is just another point of difference.

What kind of youth programs were going on in the pre-Conciliar Church? Well, there were the countless sodalities, confraternities, altar societies and various Pious Associations formed in every diocese for the purpose of the inculcation of the faith among our youth. St. Therese of Liseux recalls that she was a member of such a group and that it meant very much to her. There were larger organizations, like the sodality of the Children of Mary of the Sacred Heart, whose purpose was, according to the Catholic Encyclopedia:

"Their devotion to the Heart of Jesus prompts the making of vestments and other altar requirements for poor churches and distant missions. Their zeal takes many other forms: - supporting orphans, visiting hospitals, helping the poor in their homes, opening work-rooms and guiding reading-circles for young girls, providing for the maintenance of youthful aspirants to the priesthood: in a word, all the interests of God and Holy Church are theirs."

How many Youth Groups have you heard of that make vestments or guide reading circles? Contrast that with what goes on in modern Youth Groups: recently my wife and I were driving through a city and saw a bunch of bikini clad teen-age girls flaunting their bodies outside of a Church. They were waving signs advertising a $3.00 car wash and were clearly using their bodies to attract male customers. Now, maybe they were raising funds for a good cause. But that's not the point. The point is that the place that was supposed to be a refuge for them became an occasion of sin for themselves (and for any man who turned into the car wash because he wanted his vehicle washed by half-naked teenage girls). Not every example is that extreme; most are just dumb. Teenagers going to Youth Group to do nothing but play stupid games and talk about banal secular issues like poverty, depression and peer pressure. 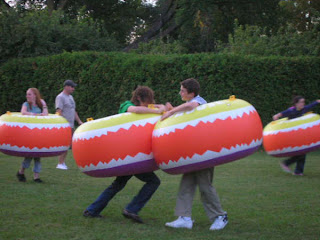 Now: a typical American Youth Group doing nothing productive at all.

Other youth organizations worth mentioning are St. John Bosco's Oratory for boys, where faith was instilled in countless Italian youth under the loving hand of the patron saint of youth. By the time of St. John Bosco's death, he had over 250 houses with 130,000 children worldwide. Of course, St. John Bosco is an extraordinary example, but there were countless other smaller organizations like his Oratory all around the world, all run by clergy and religious, all dedicated to the things of God and the instilling of virtue.

There is hope today. Of all the youth programs out there, Dead Theologians Society seems to hold the most promise at the moment. Youth gather in Church basements to pray by candlelight and to the smell of incense; then they delve into the writings and lives of the saints to be inspired by their heroic examples. You can check out the DTS website here. By and large, though, we still have a long way to go in getting our Youth Group's to where they need to be; I don't even like the name "Youth Group." But, like many other things in the post-Conciliar Church, we just have to entrust this matter to the Holy Spirit and to Christ, Whose Church it is, in hopes that He who was so solicitious for the little ones while He was on earth will not leave them orhpans now that He is in heaven.

Hi there, I'm the webmaster of the "stupid games played at youth group" that you describe. How nice of you to bash my webpage. I wonder how you'd feel if someone did the same to you.

I think you have a gross misunderstanding of what youth groups are about. Youth groups do not simply play inane games and discuss trivial matters. Don't just construct a straw man and then tear it up without actually knowing what you're talking about; it reflects poorly on you and makes you look ignorant and downright mean (and definitely not an example of Christian love).