The Mary is God Catholic Movement 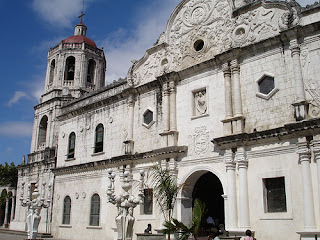 The Cathedral of the Diocese of Cebu, Philippines, where the MIGCM is headquartered

I read about this on a comment over at Athanasius Contra Mundum and I cannot help but commenting on it. I never really thought there were any Catholics who worshipped Mary as Protestants assert (except for the obscure sect of the Collyridians in the early Church mentioned by St. Epiphanius), that is until I found out about this movement.

The "Mary is God Catholic Movement" (MIGCM) was founded in the Philippines in September 2005 by one Dominic Sanchez Falar who claims to have received a private revelations of the Blessed Mother from 1994 to 2000. In this vision, she supposedly revealed to him the three secrets. Two of the three "secrets" have not been revealed, but the third secret has to do with the Third Secret of Fatima. And what is this secret?

In the words of the MIGCM website, that "the Final Dogma of our Holy Catholic Church that states that Mary is God; Mary is the Soul of the Holy Spirit."

Now, I think we can dismiss this guy out of hand, but let's give him the benefit of the doubt and allow him to explain himself. Can he find any proof that Mary is the "Soul of the Holy Spirit" in Scripture or Tradition? Let's have it in Falar's own words:

"I do not intend to present an argument to my claim. That, I sincerely believe, will be best done by you who know the True Message of Fatima and are schooled in theology and philosophy. Our Blessed Mother revealed a Dogma of Faith to me, but it seems She didn’t give me the gift of being able to defend it. Therefore, I have come to the conclusion that my job is to tell the truth and She will, in Her Divine Mercy, assign someone else to do what I cannot do."

Uh, okay. So then why should we even consider your claim?

And oh, by the way, if the above few points didn't convince you, how about the fact that it is heresy, a sin against the First Commandment, not found in Tradition or Scripture and against all common sense. Those are pretty good reasons not to believe it!

Does Falar have any arguments at all in favor of his position? He offers this explanation on his website: "Spirit is to God. Person is to Soul. Angel is to Church. Existence is to Being. Man is to Woman. Husband is to Wife. Adam is to Eve." Thanks. That clears up the issue greatly!

This is another example of private revelations run amok in the Church. I just hope the Protestants don't hear about this one; we'll never hear the end of it!

"Yes, Mary’s body was holy, but it was not God. Yes, the Virgin was surely a virgin and worthy of honor; however, she was not given us for us to adore her. She herself adored Him Who was born of her flesh, having descended from heaven and from the bosom of the Father. Honor Mary, but let the Father, the Son, and the Holy Ghost be worshiped, but let no one worship Mary....even though Mary is most beautiful and holy and venerable, yet she is not to be worshipped." St. Epiphanius, Panarion, c. 403
Posted by Boniface at 7:18 PM

It is the very odd work of the devil that encourages people to deviate so obviously from the beautiful, ancient, and simple faith of the catholic church.

I guess, as they say, you can't please everyone all the time...except by the grace of God. I'll keep praying.

any updates on this man mr. falar?