In honor of our Blessed Mother's birthday and the 850th Anniversary of the most important Marian shrine in Central Europe, Pope Benedict XVI offered Mass this morning at the shrine in Mariazell as part of his three day pilgrimage in Austria (you can read his homily here). The shrine houses a miraculous wooden statute (below) of the Blessed Virgin holding the child Jesus, which was brought here by a monk named Magnus in 1157. 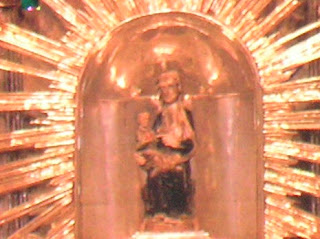 Upon arriving by car rather than helicopter due to the rainy weather, the Pope first went in to pray for a few moments at the shrine: 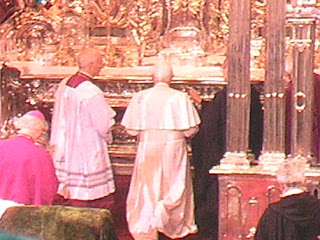 He then retired in order to be vested and came out again wearing what can only be described as tie-dyed rainbow vestments: 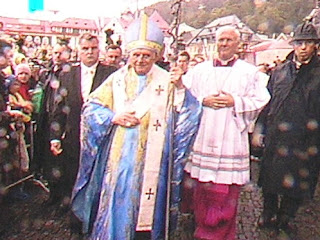 Here, at the beginning of the Mass, you can see that the cardinal is also vested in like manner. How disturbing! I can't seem to remember in which liturgical feast or season the rubrics call for such colors to be used! 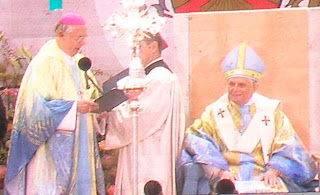 Compare these with the picture of Pope St. Pius X at the top of the sidebar and chalk up one more reason why the Church needs to return to the sanity of Tradition.

I always thought that Pius X looked as if he was with child in that photo!

He does have kind of a baby face there, doesn't he?