May, 1520: Great moments of interreligious dialogue 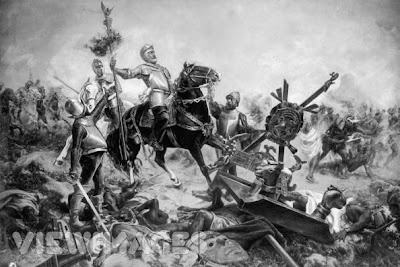 Besides being dedicated to Our Lady, the month of May commemorates the glorious days of May, 1520, when Hernando Cortez, hero of the Catholic faith, put an end to the barbarous Aztec Empire in Mexico and established the reign of Christendom there, paving the way for the apparitions of Guadalupe in 1531 and the conversion of the Mexicans. Here follows the account of Cortes' conquest of the chief pyramid in Mexico, from the monumental History of the Conquest of Mexcio by William H. Prescott (1843), which is linked up under Boniface's List of Books that Will Not Imperil the Soul:
"Cortes, who saw the immediate necessity of taking the pyramid, determined to lead the storming party himself. He was then suffering much from the wound in his left hand, which had disabled it for the present. He made the arm serviceable, however, by fastening his buckler to it, and, thus crippled, sallied out at the head of three hundred chosen cavaliers, and several thousand of his auxiliaries.

In the courtyard of the temple he found a numerous body of Indians prepared to block his passage. He briskly charged them, but the flat, smooth stones of the pavement were so slippery that the horses lost their footing and many of them fell. Hastily dismounting, they sent back the animals to their quarters, and, renewing the assault, the Spaniards succeeded without much difficulty in dispersing the Indian warriors, and opening a free passage for themselves to the teocalli.

Cortes, having cleared a way for the assault, sprang up the lower stairway, followed by Alvarado, Sandoval, Ordaz, and the other gallant cavaliers of his little band, leaving a file of arquebusiers and a strong corps of Indian allies to hold the enemy in check at foot of the monument. On the first landing, as well as on the several galleries above, and on the summit, the Aztec warriors were drawn up to dispute his passage. From their elevated position they showered down volleys of lighter missiles, together with heavy stones, beams, and burning rafters, which, thundering along the stairway, overturned the ascending Spaniards, and carried desolation through their ranks. The more fortunate, eluding or springing over these obstacles, succeeded in gaining the first terrace, where, throwing themselves on their enemies, they compelled them, after a short resistance, to fall back. The assailants pressed on, effectually supported by a brisk fire of the musketeers from below, which so much galled the Mexicans in their exposed situation, that they were glad to take shelter on the broad summit of the teocalli [pyramid].

Cortes and his comrades were close upon their rear, and the two parties soon found themselves face to face on this aerial battle-field, engaged in mortal combat in presence of the whole city, as well as of the troops in the courtyard, who paused, as if by mutual consent, from their own figthing, gazing in silent expectation on the issue of those above. The area, though somewhat smaller than the base of the teocalli, was large enough to afford a fair field of fight for a thousand combatants. It was paved with broad, flat stones. No impediment occurred over its surface, except the huge sacrificial block, and the temples of stone, which rose to the height of forty feet, at the further extremity of the arena. One of these had been consecrated to the Cross; the other was still occupied by the Mexican war-god. The Christian and the Aztec contended for their religions under the very shadow of their respective shrines; while the Indian priests, running to and fro, with their hair wildly streaming over their sable mantles, seemed hovering in mid air, like so many demons of darkness urging on the work of slaughter!

The parties closed with the desperate fury of men who had no hope but in victory. Quarter was neither asked nor given; and to fly was impossible. The edge of the area was unprotected by parapet or battlement. The least slip would be fatal; and the combatants, as they struggled in mortal agony, were sometimes seen to roll over the sheer sides of the precipice together. Many of the Aztecs, seeing the fate of such of their comrades as fell into the hands of the Spaniards, voluntarily threw themselves headlong from the lofty summit and were dashed in pieces on the pavement.

The battle lasted with unremitting fury for three hours. The number of the enemy was double that of the Christians; and it seemed as if it were a contest which must be determined by numbers and brute force, rather than by superior science. But it was not so. The invulnerable armor of the Spaniard, his sword of matchless temper, and his skill in the use of it, gave him advantages which far outweighed the odds of physical strength and numbers. After doing all that the courage of despair could enable men to do, resistance grew fainter and fainter on the side of the Aztecs. One after another they had fallen. Two or three priests only survived to be led away in triumph by the victors. Every other combatant was stretched a corpse on the bloody arena, or had been hurled from the giddy heights. Yet the loss of the Spaniards was not inconsiderable. It amounted to forty-five of their best men, and nearly all the remainder were more or less injured in the desperate conflict.

The victorious cavaliers now rushed towards the sanctuaries. The lower story was of stone; the two upper were of wood. Penetrating into their recesses, they had the mortification to find the image of the Virgin and the Cross removed. But in the other edifice they still beheld the grim figure of Huitzilopochtli, with the censer of smoking hearts, and the walls of his oratory reeking with gore,- not improbably of their own countrymen!
With shouts of triumph the Christians tore the uncouth monster from his niche, and tumbled him, in the presence of the horror-struck Aztecs, down the steps of the teocalli. They then set fire to the accursed building. The flame speedily ran up the slender towers, sending forth an ominous light over city, lake, and valley, to the remotest hut among the mountains. It was the funeral pyre of paganism, and proclaimed the fall of that sanguinary religion which had so long hung like a dark cloud over the fair regions of Anahuac! No achievement in the war struck more awe into the Mexicans than this storming of the great temple, in which the white men seemed to bid defiance equally to the powers of God and man."
Posted by Boniface at 3:28 PM

Too bad so many mexicans seem to have turned back to this kind of brutality and horror (see drug cartels for example and the terror they wreck), and hatred of "white man" (la Raza movements and so on).

Where is this taken from?

This is taken from History of the Conquest of Mexcio by William H. Prescott (1843),