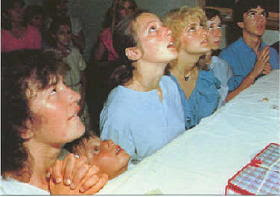 Taken from an article by Dr. Tim Brady from the May 2008 issue of Los Pequenos Pepper (linked on the sidebar):
Particularly evident in those rare venues in transition, or at least partially in transition, from faux-Catholicism to the Faith of All Time (Catholicism) are those people of very good will who have been misled by certain very significant deceptions. I think we must expect these topics to arise over and over and we must be patient, but we must not hesitate to point out the truth, for the benefit of those deceived (an act of charity), but, even more importantly, to stop the spread of these very damaging deceptions within the Church itself. Germane to this, the topic of Medjugorje has again surfaced at our parish. Last week, during one of his catechism classes, Father repeated and explained the infallible Catholic dogma "Extra-Ecclesiam Nulla Salus (There is no salvation outside the Church)."
I was sitting in the very back and the wife of a very nice young couple very politely challenged Father on this dogma of the Faith. It was one of those situations where, although looking at the back of her head, I could tell that her face evinced her lack of conviction after Father’s explanation.
The class soon ended and she came straight to me (I do not know why, because I remain very silent in that class) and said, "What about what Mary said at Medjugorje?"

"That one religion is as good as another," she answered.

I did not have a lot of time, nor, I suppose, was I disposed at that moment to some sort of long explanation, so I opted to cut to the chase. "Medjugorje is a hoax," I replied, not expounding on the fact that a hoax is the most benign thing Medjugorje can be.

Well, that led to the predictable type of interchanges such as "What about the fact that Pope John Paul II said Medjugorje was good", and the like. I really (untypically) kept it brief. I was asked to produce on the spot the documents from the ordinaries of the Diocese of Mostar condemning the apparitions. I did not have them, but I brought them to the next meeting.
So let’s back up. Let’s ask ourselves, "What well-formed Catholic mind could not see immediately that any supposed apparition that claimed that all religions are just as pleasing to God as the Catholic religion could not possibly be Our Blessed Mother?" I mean, the discussion ends before it begins. Now we are left with two possibilities:
1. There are no apparitions whatsoever. The whole thing is a hoax and a type of mass hysteria, if of the seemingly pious type, or...
2. Something is appearing and impersonating Our Blessed Mother. This is, at least to me, the more sobering option.
In either event, I believe we need to take the whole phenomenon very seriously. I am not a student of Medjugorje nor do I really wish to be. I am frying other fish. But it did later come up in conversation and the reasonable question was asked, "Well, did whatever is supposed to be appearing at Medjugorje really say that?"

Excellent question. I assumed that it had been said because I have heard it more times than I can count from Medjugorje devotees. But that is intellectually lazy so I did a quick search on the internet for that supposed "teaching" of whatever this is at Medjugorje.
I came up with a lot of hits, but the following one, I think, expresses all of this much better than I am currently doing: http://www.unitypublishing.com/Apparitions/Medjugorjecraig.html. [Excerpts from Craig Questions Medjugorje…] Below are the problematic statements...written in books by those who believe and support the apparitions at Medjugorje:
Question to Vicka: "There are millions of people on earth who are not Christian -what does the Blessed Mother want of them?"
Vicka: "To pray. All people on earth are born with knowledge of God in their hearts. Everyone has his own way to pray. The Blessed Mother is the mother of all people on earth. She has a mother’s love for them all, and her messages, which are from God, are for everyone.
Question: "Then it doesn’t matter what name or person they call God?"
Vicka: There is only one God. It is man who makes divisions."
(Page 51, Queen of the Cosmos by Connell)
Question to Vicka: "Is the Blessed Mother calling all people on earth to be Catholic?"
Vicka: "No! The Blessed Mother says all religions are dear to her and her Son. She says it is we on earth who have made division."
(Page 119, The Visions of the Children, Connell)
Interview with Mirjana by Father Tomislav Vlasic

Mirjana: "The Madonna always stresses that there is but one God, and that people have enforced unnatural separation. One cannot truly believe, be a true Christian, if he does not respect other religions as well. You do not really believe in God if you make fun of other religions."

Father: "What, then, is the role of Jesus Christ, if the Moslem religion is a good religion?"

Mirjana: "We did not discuss that." (The role of our Lord Jesus Christ) "She merely explained, and deplored, the lack of religious unity, ‘especially in the villages.’ She said that everybody’s religion should be respected, and of course one’s own."
(Page 124, The Apparitions of Our Lady at Medjugorje, Kraljevic)

2. Good hope at least is to be entertained of the eternal salvation of all those who are not at all in the true Church of Christ.

3. Every man is free to embrace and profess that religion which, guided by the light of reason, he shall consider true."
The above errors are collectively know as indifferentism, meaning that it doesn’t matter which religion one adopts, since one can be saved, according to this error, outside the Catholic Church. (One can read more at the above website.)
It is not pleasant in these days to be a naysayer. There are today, however, a number of "sacred cows" that are perversions of the truth or denials of truth. Nonetheless, these sacred cows have gained, in some cases, what amounts to "celebrity" status amongst some members of the Church. As Holy Mother Church finds her way back to Catholic dogma someone is going to have to begin pointing these things out. Like so many parties in the 60s, there are going to be some hangovers after this one. Thank God we have the signposts of true Catholic dogma to guide us
back to truth and reality as the euphoria wears off. Turn on the lights. The party's over.
Posted by Boniface at 1:38 PM

It is no wonder there is much confusion. Even from within the Church, we have the problem with the CCC, and how one individual has attempted to correct the misconception that all religions are okay.

We our own bishops make a mistake (oversight, perhaps in proofreading??), that is one thing.

But when the mistake is left unresolved or unclear (like the scandals, duh...), it only makes your job as a DRE, and my job as a Catholic, that much harder.

Hello - just a brief question. Is Extra Ecclesiam Nulla Salus dogmatically defined? I thought it was, but a priest corrected me and said it was not dogma (in big and heavy capitals too; it was an email exchange).
Thanks. It does get a little confusing.

Extra Ecclesiam Nullus Salus is indeeed Church dogma. It has always been believed, but was formally defined at the Fourth Lateran Council (1215)in these words:

"The universal Church of the faithful is one outside of which none is saved." This can be found in denzinger 430, linked on the sidebar.

A more famous statement of this doctrine is in Pope Boniface VIII's bull Unam Sanctam (1302), which says: "It is absolutely necessary for every living creature to be subject to the Roman Pontiff for salvation."

This teaching was restated by Pope Pius IX, Leo XIII and Pius XII in Mystici Corporis.

Though one may not find the principle in such clear cut terms in the Vatican II documents (although Lumen Gentium does teach this as well), it is certaibly a de fide dogma of the Church.

Thanks for responding, and for providing the references too.
I am actually relieved.