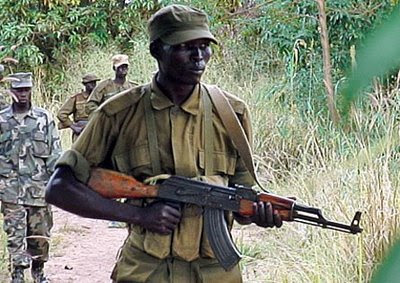 Yesterday in the Democratic Republic of Congo over 100 Catholic villagers were massacred inside a local parish church while worshipping. The attack was carried out by the Ugandan group the "Lord's Resistance Army." Worshippers were hacked to death with machetes and swords. There is not too much info out right now on the attack, nor is it clear why these particular villagers were targeted. One of the military captains who came upon the scene afterward said, "The scene at the church was unbelievable. It was horrendous. On the floor were dead bodies of mostly women and children cut in pieces.” Many of the LRA are none other than the same Hutu death squads who carried out the 1994 Rwandan genocide. Following the end of the genocide in 1994, the death squads were pushed out of Rwanda into neighboring Congo where they have continued an intermittent guerilla war for years.
Please pray for the victims of the massacre and an end to violence in this region.
Posted by Boniface at 12:25 PM

It seems that when something horrific happens to Catholics it is under reported. Thanks for posting.

my family is horrified at this. these days it is not cool to say you are catholic and may ridicule you when you say you are. my fear is that it will be even harder for my children. thankyou for reporting this cause no else seems to see the revelence to this.