"Thank you" to Muslims? 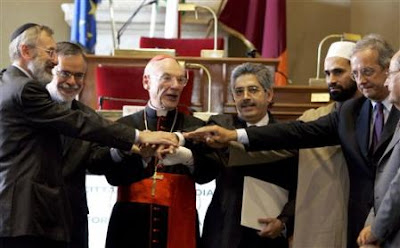 Cardinal Tauran has "thanked" Islam for bringing God back into the mind of European culture. Most of what he says in this particular article (which you can read HERE) is more of the same interreligious dialogue stuff we've heard before, but he uses some interesting words. For example, when talking about the need to open communication with other faiths, he says that all relgions are "condemned to dialogue." Condemned? I'm not sure what he was getting at here, but the Reuters article connects the statement with a recent statement by the Pope in which the Holy Father said that interreligious dialogue had to presuppose the possibility that one side is ultimately convinced by the other, which for me personally has been the elephant in the living room in the whole interreligious dialogue issue. But I don't understand the Cardinal's point about religions being condemned to religious dialogue, unless he is addressing the anguish that orthodox Catholics endure when "condemned" to hearing about such nonsense as the Assisi Prayer Meetings, etc.
But what about this idea of Muslims bringing God back to Europe? Doesn't it presuppose that Allah is the same God as the Triune God of Scripture? It must, otherwise the Muslims wouldn't be bringing God to Europe, but would be bringing in only a false-god, which of course I contend they do. They're not bringing "God" back to Europe, at least not the God we want to associate with. Thanking Muslims for introducing God to Europe is like thanking Wiccans for bringing back spirituality or thanking Jehovah's Witnesses for their evangelism efforts. The Muslim god Allah is not the same as the Trinity, nor does he even share similar characteristics. It is foolishness to thank them for bringing Allah into Europe, as if Allah is what Europe needs. Ask Charlemagne, Don Juan, the Franciscan martyrs, Jan Sobieski, St. John Capsitrano or Constantine XI if Allah is what Europe needs!

But also, the manner in which Allah is introduced into European discussion is a negative one: religion is not being discussed because European Muslims are such outstanding citizens and such wonderful witnesses to sanctity that Europeans are wanting to talk about religion. No: they are promoting religious discussion because of things like the riots over the Mohammed cartoon, the murder of Theo Van Gogh in 2004, the French riots of 2005, the insane outrage over Benedict's Regensburg speech, the continued headscarf controversies in Europe and the many other ways in which Islam is bullying its way ever so slowly into a dominant position in European life and brutally attempting to silence those who oppose it. Even if we grant that discussing religion is a good thing (which it is), this is not the manner that people should want it brought to light.

Thanking Islam? Only in the upside-dwon, anti-Christian nuthouse we call modernity could members of the Vatican be persuaded to happily thank the people who are cutting their throats.
Posted by Boniface at 10:16 AM

The Vatican is merely ''using'' islam as a tool to counter radical secularism.

This might have some unwanted side effects, that you have discussed, but in practice it's a way to show a deeply atheistic european regime

*1) inter-religious collaboration is possible and desrable *2) that this can bring back ''god'' in the public and political square in a positive way.

In practice, the view taken by Tauran considers religions as ''peoples'', ''cultures'' and ''civilisations''. This is called ''immanentism'', sometimes contrasted with the more traditional ''transcendentalism''.

In any case, God is both philosophcally immanent and transcendnent, he is both ever-present and ever-mysterious and invisible. This approach is the ''identity approach'', because while encouraging dialogue, it strongly defends the Christian identity and dogma of Trinity.