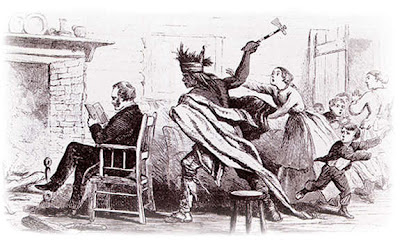 A depiction of the killing of Dr. Marcus Whitman in the 1847 Whitman Massacre. As if he'd be reading a book at the fireplace completely oblivious to all that commotion behind him!
I seem to have been reading alot about Native Americans and Indian-white conflicts as of late. I think this was partially inspired by my reading of Saint Among Savages (bio of St. Isaac Jogues) earlier this year, as well as a history of the Seneca Indians, followed by a rewatching of Last of the Mohicans and the presentation of two-part class on Church history for the parish with a large focus on the Jesuit missions in Canada. Following along on this Indian theme, I recently started reading the Atlas of the North American Indian by Carl Waldman (linked up on the sidebar). It is a comprehensive atlas of the locations of every major (and some minor) Indian tribes from the mound builders right up to today. The book is politically correct and very shabbily written, but its a nice resource for its many maps showing Indian tribal lands in relation to modern boundaries.
At any rate, it also has a lengthy tribe-by-tribe history of each group's conflicts with whites. One interesting situation I read about had to do with the Cayuse Indians who lived in eastern Oregon and eastern Washington in the Blue Mountains region. Their geographical location made them an interesting case: due to their proximity to California, they had already been contacted by Spanish settlers and had been introduced to Catholicism. From what I've read, the Cayuses had not been exposed to the Spanish Franciscan missionary activity long enough to have adopted the Faith in any real way, but they were friendly to the priests at least.
In 1836 American pioneers began coming into the Cayuse lands from the east under Protestant missionary Marcus Whitman. Whitman came with an influx of a thousand other pioneers and trappers, and has been described as rigid and contemptuous of the Cayuse Indian traditions. Other sources attribute this hostility to the Indians not to Marcus but to his wife, Narcissa. At any rate, the Indians soon found themselves with the Catholics on their west and the Protestants on their east, each vying to convert them. However, shortly after the arrival of the Americans, a smallpox epidemic broke out and decimated the Cayuse population.
The Cayuse held Whitman personally responsible for the outbreak of the epidemic, and the Cayuses plotted to kill him. On November 27th, 1847, a band of Cayuse descended upon the Whitman homestead and murdered Whitman, his wife and thirteen others. This violence sparked a war called the Cayuse War that ravaged the Oregon Territory for the next eight years. At the end of the fighting, the Cayuse who had committed the murders were turned over to the American authorities and given the choice of choosing either Catholic or Protestant rites at their executions. They unanimously chose Catholic rites and received baptism, confirmation and eucharist before being hanged.
Despite the fact that a Catholic priest, Fr. John Baptist Brouillet, aided the victims of the Whitman massacre and helped bury the dead, local Protestant clergymen soon began accusing the Catholic missionary priests of inciting the Cayuse to commit the murders. The Protestant minister Rev. Henry H. Spalding, a companion of Whitman's and an anti-Catholic agitator, acutally published a tract in which he formally accused the local Catholic clergy of instigating the revolt, a charge that was strongly denied by the local Catholic priests. However, Spalding's tract was reprinted many times for the next fifty years and accepted as fact by many Protestants in Oregon and abroad until it was discredited in 1901.
The interesting thing about the Cayuse story and the Whitman Massacre is that it reveals an Indian tribe caught in two culture clashes: that of Indian vs. white, and then that of Protestant versus Catholic. It is interesting how given a choice between which rites to undergo at death, they chose those of the Catholic Church. This underscores the often observed fact that Catholic missionaries usually developed much better rapport with Indians than their Protestant counterparts. This may account for the Cayuse adhering to the true Faith -- or perhaps it was the beauty of their rites, the same thing that convinced Vladimir of Russia to adopt Christianity over Islam and awed the Aztecs when they first saw Cortez and his men chanting at a Solemn High Mass in Tenochtitlan. Too bad the Anglo-American policy of extermination ended up being the road our nation ultimately went down.
Posted by Boniface at 4:07 PM