This time of year is so depressing... 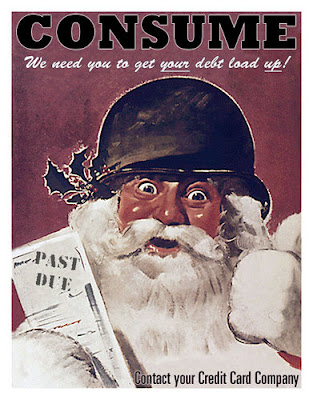 As I mentioned last year at this time, I always seem to fall into a depression as Christmas approaches. Last year I pondered this in the context of Christmas carols, and why many of our most treasured carols seem to have a melancholy aire about them which is both wistfully nostalgic and softly depressing. I cited as reasoning for this a perceived rupture between the ideal of a traditional, pleasant Christmas with family and the harsh reality of an indvidiualistic, commercially driven holiday which we actually experience.

I'd like to expand these thoughts beyond just the realm of music and state that after another year of reflection and another season enduring an even more commercialized Christmas, I think the disconnect runs throughout every element of the holiday, not just the musical aspect of it.
People tend to get frustrated and upset when the reality of anything falls short of the ideal. This is perhaps the root philosophical source of the discontent of many Trads at the state of the Church: the fact that the sad reality of the Church's condition falls so far short of the glorious ideal to which she is called and has been given the means of grace to attaint to. I think one reason Christmas time can be so depressing for people is that the reality of a politically-correct, commercialized Christmas falls far short of the ideal of the Spirit of Christmas and what a worthy celebration of this holiday should look like. In fact, I'd say one would be hardpressed to find a sharper divergence between reality and ideal than in the American approach to Christmas.
Even if a family decides they are going to not get sucked in by the commercialism and tries to do the holiday a little bit more traditionally (integrating Christmas within the preperatory season of Advent, focusing more on the spiritual aspect of it, dumbing down the amount of merchandise purchased), the lesson is going to be a bitter one for children whose friends, cousins (and anyone else who is is secularized but close enough to your family that they can't be ignored) will be showing off all of their new gadgets at the family gatherings, giving rise to a kind of confused envy in the children who understand that mommy and daddy celebrate Christmas differently but nevertheless wish they could have the cool stuff that secularized Uncle Jeff always seems to buy for spoiled Cousin Jake.
This brings to mind a conversation that I had recently with a Catholic literature professor: it is not enough that individual families agree to practice the faith and hold fast to our Catholic Traditions. It takes a whole community and a surrounding culture to create a climate in which those customs and mores are taken as the norm. Sure, I can do Christmas traditionally if I want, but as long as I am surrounded by secular family and friends, my kids are going to have the painful realization that our way is not the norm but a deviation from the norm. That in itself is not bad -- I am perfectly fine being considered a social deviant. But it causes the children to think of our ways as odd eccentricities that they may grow up to be embarassed by or at least apathetic to.
This is why organizations like homeschool groups and like associations are so essential. I am blessed to be part of a large homeschool group in my area that has created a kind of Catholic subculture that permeates everything done by these families. Catholicism is not then restricted to the family alone, but it is seen and practiced by every other adult the child comes in contact with, creating the (accurate) perception that traditional, faithful Catholicism is the ideal and normative means of human existence. Whiel their education remains personalized and specialized for their particular needs (since they are homeschooled), their upbringing can hardly be said to be individualistic. It is communal in the truest sense. There is much truth in the old saying that it takes a village to raise a child.
Which brings us back to individualism, perhaps the biggest thing standing in the way of reclaiming a truly Catholic Christmas. Individualism is hard to shake once one has tasted of it and experienced the addicting satisfaction of putting oneself first. Only prayer and penance can defeat it. The Pope has expressed hope that the financial crisis will help to roll back consumerism and allow people to experience the true meaning of Christmas. Let us hope so.
So, while I am finding myself depressed this Christmas, I also have great reason to be thankful. It is the paradox of Christian life: the surface can be blown from pleasure to sadness, contentment to depression at times, but there is an underlying substrata of joy that comes from the indwelling of the Spirit and the knowledge that everything will be put right in the end.
Posted by Boniface at 1:58 PM

Well said! We're really relishing the Catholic community we have around us right now, it makes all the difference in the world.