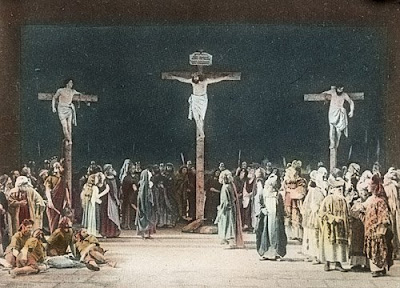 A scene from the Passion Play of Oberammergau

"O God, Who, by the Passion of Thy Christ, our Lord, hast loosened the bonds of death, that heritage of the first sin to which all men of later times did succeed: make us so conformed to Him that, as we must needs have borne the likeness of earthly nature, so we may by sanctification bear the likeness of heavenly grace. Through the same Christ our Lord, Thy Son, Who liveth and reigneth with Thee in the unity of the Holy Ghost, God, world without end. Amen."

Today is the most solemn day of the Church's calendar, the day upon which Our Lord Jesus Christ, after hours of agony, was crucified and expired upon the cross for the sins of man. For centuries, this paramount event in salvation history was acted out upon innumerable stages thoughout Europe in a cultural institution known as the Passion Play. Passion play's were once found in every hamlet and village throughout Christendom and were considered as integral to the season of Easter as the Nativity scene is to Advent.

With the Reformation, the Passion Plays were phased out in many Protestant lands, while in Catholic lands they gradually fell away as the populace turned to rationalism in the 1700's. Many nations actually banned Passion Plays under their atheist-socialist governments of the 19th century. Often times, the Church itself stepped in to phase out these plays, as they had by the 15th century grown very secular in character and sometimes contained obscene or bawdy content. Today, there is only one Passion Play that survives in complete continuity from centuries ago: the famous Passion Play of Oberammergau, Germany.

Oberammergau (a town of Bavaria, the German province which did not follow Luther into heresy) is home to the most well known Passion Play in the world. In the middle of the Thirty Years' War (1618-1648), during which it is estimated that a third of Germany's population perished, the town of Oberammergau found itself ravaged by a periodic recurrence of the bubonic plague. Therefore, they made a solemn vow to God that, if they were spared the plague, they would perform a Passion Play every ten years until the end of the world. This was in 1633, and the first play was performed in 1634, on a stage set up over the graves of those who had been killed by the plague. The plague did indeed recede, and the vow has been kept ever since, with the play being performed once every ten years, with only a few exceptions.

Once, in 1770, the play was banned by the Elector Maximilian Joseph. The play was restore din 1780 under a different title and with some of the content rearranged. During the chaos of World War II, the play lapsed as well.

The next scheduled performance of the play is in 2020. In 2010, the play over 530,000 spectators. It runs for seven hours with a meal half-way through and is one of the most elaborate Passion Plays in the world. Prices (including lodging and food) are around $1,200 per person. Thinking of going? Get your tickets now. The 2010 play sold out over two years ahead of time.

See you all after Easter!
Posted by Boniface at 5:10 PM

I was there in 2000. I think it's worth going there. www.oberammergau.org