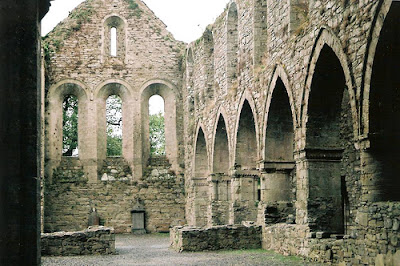 A ruined Church in the region of Ossory, near the original hermitage of St. Ciaran (c.420)
Unfortunately, my favorite saint's feast day falls during Holy Week this year and will be largely ignored in many places in the United States. That's right, I am talking about St. Patrick. Though I took Francis if Assisi as my Confirmation name, now that I am a bit more educated, I think if I could do it again I would choose Patrick. During my last six years as a Catholic, I have done a great deal of reading about Patrick, the great Irish saints, the Church in Ireland and the history of Ireland in general and I have come to the conclusion that Ireland has played a more important role in the history and spirituality of the Church than any other country except Italy (and perhaps France). Furthermore, I think Irish spirituality and the great Irish saints are some of the best exemplars of what Catholicism can do for a culture and also what power the Catholic faith can have in the lives on individual men and women who are willing to take it seriously. And few have ever taken Catholicism more seriously than the Irish. Thus, for this entire last week of Lent, I am going to devote each post to something to do with Patrick, Ireland, Irish history or Irish saints. Please feel free to share whatever love you may have for the Island of Saints and Scholars as well.
Catholicism did not actually begin in Ireland with St. Patrick, though the inroads there before him were meager indeed. St. Palladius had been consecrated first bishop of Ireland by Pope Celestine I. But St. Ciaran was the first truly notable Catholic presence in Ireland. As there are over two-dozen St. Ciarans in Ireland, this one is known as Ciaran the Elder. His date of birth is uncertain, but it appears that he was a Christian of some relation to the royal house of Ulster. He travelled to France and studied the faith there, then went on to Rome where he was ordained priest and bishop. When he returned to Ireland, he set up a monastic cell at Ossory and had been living there in monastic solitude for some years when St. Patrick first arrived. When Patrick first came upon the holy man, he already had a small community of monks living about him.
St. Ciaran willingly helped St. Patrick and became the first Bishop of Ossory. Ciaran went on to help Patrick in his conversion of Eire and worked many miracles, even raising many to life. Ciaran is remembered as one of the Twelve Apostles of Ireland, along with other such greats as St. Finian and St. Columba of Iona. The date of his death is unknown, but it is believed that he preceded Patrick in death.
The most famous legend associated with St. Ciaran is that of the bell of St. Patrick. It is said that while Ciaran was studying in Rome, he made the acquaintance of the young Patrick, who was also studying for the priesthood there. When they were about to part ways, Patrick gave Ciaran a bell which he told him would ring the next time the met each other. Ciaran carried the bell with him back to Ireland and kept it in his hermitage.
Years later, as Patrick passed by the region of Ossory, and while Ciaran was in his hut at his prayers, the bell began miraculously ringing at Patrick's approach. Ciaran went out to meet his old friend, and the two were joyously reunited in the work of Christ.
Something interesting to be pointed out about Ciaran: all accounts agree that he was already a Christian when he left to study and that he was brought up in a Christian family. It would have been around 390 when Ciaran left Ireland to study in France and Rome. This means that prior to 390, Christianity was well enough established in Ireland to have claimed converts among some of the most noble families (remember, Ciaran was related to the royal house of Ulster). This would push the date of the Christian incursion into Ireland way back from its traditional mid 5th century date to a mid-4th century date.
Also, by about 420 when Patrick arrived in Ossory, Ciaran was already living there as unofficial abbot of a group of monks according to some kind of primitive rule. Consider what this means: St. Benedict, founder of Western Monasticism, did not even depart into the region of Subiaco until 494, and the Rule was not written until around 530, over one hundred and ten years after St. Ciaran was already living a monastic life in the wilds of Irish Ossory!
As much as I love St. Benedict, his title as Founder of Western Monasticism is simply not true, at least chronologically (though it definitely is in the matter of his influence). From whence did St. Ciaran learn his monastic lifestyle? What type of rule bound these primitive Irish hermits? How we would love to know the answers to these questions.
Next time: conversion of Ireland & Scotland
Posted by Boniface at 9:44 PM