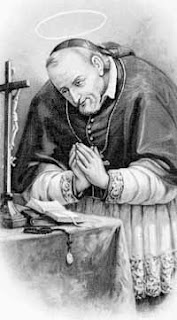 By my bedside I have the Tan Books edition of the Sermons of St. Alphonsus Liguori. It is one of those handy little pieces of literature that give you the sermons of a particular saint for every Sunday of the year. I thought this sermon for the upcoming 5th Sunday of Lent was very profitable (it was called Passion Sunday in the pre-1970 calendar before they for some reason started calling Palm Sunday Passion Sunday). Here the famous saint speaks on the dangers of lukewarmness, venial sin and doing just the bare minimum:
What then are we to understand by a tepid soul? A tepid soul is one that frequently falls into fully deliberate venial sins,-such as deliberate lies, deliberate acts of impatience, deliberate imprecations and the like. These faults may be easily avoided by those who are resolved to suffer death, rather than commit a deliberate venial offense against God. St. Teresa used to say that one venial sin does us more harm than all the devils in Hell. Hence she would say to her nuns: "My children, from deliberate sin, however venial it may be, may the Lord deliver you." Some complain of being left in aridity and dryness and without any spiritual sweetness. But how can we expect that God will be liberal of His favours to us, when we are ungenerous to Him? We know that such a lie, such an imprecation, such an injury to our neighbor, and such detraction, though not mortal sins, are displeasing to God; and still we do not abstain from them. Why then should we expect that God will give us His divine consolations?
But some of you will say: Venial sins, however great they may be, do not deprive the soul of the graces of God: even though I commit them, I will be saved; and for me it is enough to obtain eternal life. You say, that, for you it is enough to be saved. Remember that St. Augustine says, that, where you have said, "it is enough," there you have perished. To understand correctly the meaning of these words of St. Augustine, and to see the danger to which the state of tepidity exposes those who commit habitual and deliberate venial sins, without feeling remorse for them, and without endeavoring to avoid them, it is necessary to know that the habit of light faults leads to soul insensibly to mortal sins. For example: the habit of venial acts of aversion leads to mortal hatred; the habit of small thefts leads to greivous rapine; the habit of venial attachments leads to affections which are mortally sinful. "The soul," says St. Gregory, "never lies where it falls" -Moral., lib. XXI. No; it continues to sink still deeper. Mortal diseases do not generally proceed from serious indisposition, but from many slight and continued infirmities. so, likewise, the fall of many souls into mortal sin follows from habitual venial sins; for, these render the soul so weak, that, when a strong temptation assails her, she has not strength to resist it, and she falls.
What an excellent quote from St. Augustine: "Where you have said, "It is enough," there you have perished." I have not often heard such a strong message against venial sins. For that matter, when is the last time you really heard a good homily against mortal sins?
St. Alphonsus, ora pro nobis!
Posted by Boniface at 8:44 PM

I've always been partial to this one by Newman:
she [the Church] holds that it were better for sun and moon to drop from heaven, for the earth to fail, and for all the many millions who are upon it to die of starvation in extremest agony, so far as temporal affliction goes, than that one soul, I will not say, should be lost, but should commit one single venial sin, should tell one wilful untruth, though it harmed no one, or steal one poor farthing without excuse.