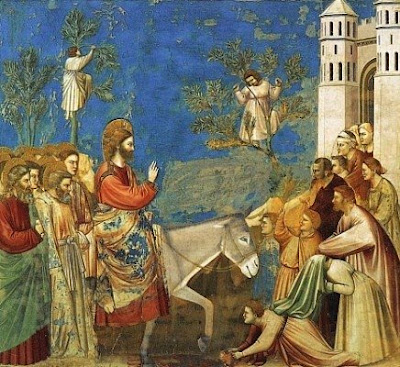 Well, this past Sunday I had the privilege of attending my first Palm Sunday Mass celebrated according to the Extraordinary Form. I also took with me several aqcuaintances who had never before been to a Tridentine Mass. I was very happy to have them along, but upon retrospect I think that perhaps the traditional Palm Sunday liturgy is not the best place to bring somebody who has never been to the old Mass and who may already have a knee-jerk reaction that it is dull or boring. This is mainly due to the length of the liturgy; I think we walked in at 9:30 and didn't walk out until 12:00. Nevertheless, they all said they enjoyed it, and so it was a good time for all.
The most beautiful part for me was the distribution of the blessed palms and the procession, which are two aspects of Palm Sunday that are often lacking in reverence in Novus Ordo parishes. The priests blessed the palms and then everybody came up to the communion rails and received their palm kneeling straight from the hand of the priest, furthermore kissing it before taking it into their hands. As I knelt and kissed the palm and smelled the incense, I reflected on the majesty of the Lord's sacrifice. If we kneel at the communion rails and kiss even the palms with which we celebrate His entry into Jerusalem, how awesome must be our veneration towards the Lord Himself, especially when He gives Himself in the Sacrifice of the Mass? The Church has many other forms of veneration in Holy Week, notably the kissing of the cross on Good Friday. These rituals to me suggest that the true gravity and awesomeness of the Lord's death is so beyond the capability of man to adequately grasp that we feebly attempt to give Him due honor by venerating the implements of the Passion and of Holy Week, like the palms and the cross, because we know that the honor we give Him directly falls far short of what He deserves. But, if we do these things to a wooden cross and some palms, what ought we to do before God Himself in the Sacrament?
Then the procession: the chant was heavenly, and for a moment in my mind it took on almost a Middle Eastern quality and seemed to be something similar to what would have been chanted during Paschal time in ancient Palestine. This might not be too far off: some scholars have suggested that Gregorian Chant developed from earlier forms of chant used by Jewish-Christian communities that were themselves taken from chants used at the Jerusalem Temple. I don't know if there is any merit to this theory or not, but as I processed around the Church with my palm listening to this gorgeous chant, it was not too far of a stretch for me to place myself there at Jerusalem on the first Palm Sunday.I don't know how long this procession wen ton, but I could have done it all day I think because the ritual action, coupled by the heavenly chant and the collective reverence and piety of the people made it a joy.
Everything was so orderly and reverent. I have already explained how we went up to receive our palms with a pious kiss at the rails from the hands of a priest (and only after they had been incensed, prayed over and blessed several times). Now, the Novus Ordo parish I used to go to handed out the palms on Palm Sunday in the following manner: everybody would show up about fifteen minutes before Mass and go into the fellowship hall (the same place where we have coffee and donuts after Mass). There, the palms would be sitting on a table. We'd all just grab one and stand around waiting for the procession to start.
At the Traditional Mass, we filed out of our pews into a long line two wide and processed solemnly around the Church (which was rather large) two times. We walked solemnly and listened to the chanting emanating from the choir loft. In my old parish, to contrast, we waited for the priest to walk in, he grabbed his palm, and then we simply walked from the fellowship hall into the Church in a big, incoherent group (a distance of about thirty feet). It was very anticlimactic.
I think there is nothing more moving and worshipful than a reverently done procession, whether it is for Palm Sunday, Corpus Christi or whatever. Like fasting, it is one of those things that traditionally has been known to "move God" to act. Look at the procession around Jericho that brought forth God's miraculous destruction of the city walls. Josephus mentions that the Temple priests processed forth from Jerusalem when petitioning God to spare their city from Alexander, which indeed happened. There is a long and beautiful tradition in Russia and all of the Eastern Orthodox Churches of processing with icons around the city before a battle or especially when the city was under attack. If I remember correctly, Charlemagne and the Pope had a procession in Rome praying for God to avert a plague on the French troops in Lombardy, afterwhich the plague miraculoulsy lifted and struck the Lombards instead!

A procession is meant to move God's hand by mass acts of piety and devotion. If we did them more often and with greater solemnity, especially with the Holy Eucharist, I think amazing things would happen to the Church. But, to too many, processions are just another medieval encrustation that is superstitious and expendable in the modern progressive Church.
Posted by Boniface at 12:41 PM

Thanks for your blog. I also attended my first Palm Sunday mass in the Extraordinary Form. What a moving experience it was! Receiving the blessed palms from the priest's hands was humbling. It made me think about how much more I need to humble myself when receiving the Eucharist. The procession is a powerful witness to the outside world.

My Novus Ordo parish has never had a procession, and I understand that this year the congregation sat for the proclamation of the passion. Yep, we can stand for a couple hours at a football game or concert, but we can't stand for 10 or 15 minutes to listen to what is one of the most important gospel readings of the church's year.

The extra good dose of reverence in what you describe is moving to be sure.

And I can see how someone "new" in the faith might get rather antsy...

Did anyone suggest that getting the palms yourself, and perhaps laying them in the aisles (for the persona Christi to walk on) would be more like the readings??

The extra good dose of reverence in what you describe is moving to be sure.

And I can see how someone "new" in the faith might get rather antsy...

Did anyone suggest that getting the palms yourself, and perhaps laying them in the aisles (for the persona Christi to walk on) would be more like the readings??

N.O. parish - form #2, not the main Mass - palms were blessed and incensed at rear of church. Laity who wanted to (why wouldn't they?!)went to the rear, received palms and processed up the aisle, distributing palms to those who chose to stay in the pews. Next year I'll try the main Mass so I can experience form #1

Processions and chant are very beautiful, definitely. But the Palm Sunday celebration in the extraordinary form is not all that 'traditional,' just 15 years old than the novus ordo form.

Bugini's influence extends farther back than 1969.