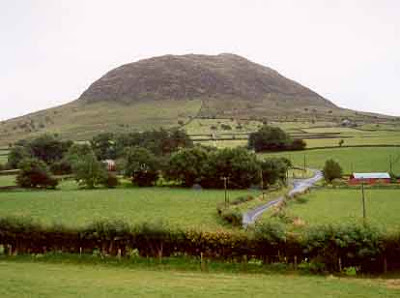 Everybody who is reading this blog is most likely sufficiently knowledgeable of the life and history of St. Patrick for me to avoid a detailed retelling: of his birth from moderately well-to do Christian parents in Roman Britain, his kidnapping by pirates at a young age and slavery as a shepherd on Mt Slemish in Ireland, his miraculous escape, ordination to the priesthood, his dream bidding him return to Eire, his famous fire at the Hill of Tara and his stand against the Celtic druids, and the eventual conversion of the entire kingdom to the faith of Christ. It is a wonderful story and one of the most glorious chapters in the Catholic Church's history.


Ireland was not the first country to convert whole-scale to Catholicism (Armenia was, around the year 300), nor was it even the first country outside of the Roman Empire to convert (that distinction goes to Ethiopia, converted by St. Frumentius around 330). However, Ireland was the first country be be converted whose subsequent history tremendously impacted the life and development of the Church. Armenia was quickly lost to the Monophysite and Nestorian heresies, only to be swallowed up by the Sassanid Persians two generations after its conversion; Ethiopia, converted by St. Frumentius by means of his friendship with King Ezana, quickly became inward looking and cut-off from the wider life of the Church (to this day, Ethiopian Christianity is one of the most eccentric forms of the Faith found anywhere on earth).

Yet Ireland did not look inward, but outward. Chesterton, after visiting Ireland, once remarked that though Ireland was but a tiny island, it seemed to reach out and spread its arms about the whole world, as he recalled that there had once issued forth from this isle innumerable hordes of saints and sages bringing the light of Christ to Europe in a dark time. Irish Christianity, from the beginning, was evangelistic and fruitful.

I propose that the conversion of Ireland (and the closely linked conversion of Scotland by the Irish) are textbook examples of how evangelism ought to be carried out. If we take the example of Patrick lighting the Paschal fire on the Hill of Tara, we see that Christianity was introduced as something over and against the prevailing religious systems. On one hill, the light of the druidic priests was lit, but the Paschal fire on another, to symbolize the light of Christ coming into the land darkened by druidic error. They were not the same light, but two opposing lights on two opposing hills. Whether or not the stories of Patrick's often miraculous conflicts with the druids are historical, in them we see a man who viewed his God as being against the gods of the heathen, who were evil spirits. Patrick would never have confused people by trying to show how Lugh and Jesus were actually the same god; he confronted paganism when he saw it.

The confrontations were always in the spirit of charity; Patrick won over every king and ruler he met by his gentle demeanor and honest character. But he harbored no doubt that the gods he contended with were false, and his contests with the druids demonstrate this. For example, when the druids caused it to snow, and then Patrick, in the name of God, made the snow go away, we see the understanding that the gods of the heathen were either (a) nonexistent, or (b) malevolent spirits hostile to the true God. Like St. Benedict with the famous altar of Apollo, Patrick once destroyed a large boulder that was being worshiped. His God was the Lord of Hosts, Who loved the Irish people but detested the abominations into which they had plunged themselves. However much Patrick loved the Irish, he never thought twice about destroying their idols.

Furthermore, Patrick understood the best means to win over people. As he went about baptizing and ordaining bishops, he founded monasteries. A study of the life of St. Patrick will reveal how closely Patrick saw conversion and the monastic life; the two were one for him - to convert, one must establish monasteries, and once monasteries are established, the people can be better converted. Patrick and the Irish conversion demonstrates the long held conventional wisdom of the Church that those committed to the religious life are the best persons fit to bring the Gospel to the new lands. By their vows, their simplicity of life and their humble servitude, they bear witness to the truth of Christ's Gospel and lead others to follow Him. All of the early Irish saints are monks, all of them famous for setting up monasteries (like St. Columba on Iona) and all of them viewed monasticism as the best way to Christian perfection.

What do I imply here? Well, contrast what Patrick did with what would have been done today. Ireland would have been sent as missionaries several organizations of lay persons. Instead of setting up contests challenging the power of Lugh, Goibniu and the other Celtic deities, these lay persons would organize up dialoguing sessions to explain to the druids how they have really been worshipping Jesus all along every time they pray to Lugh and that there are many elements of truth to be found in druidism. The missionaries would start adopting druid customs and making token appearances at the Samhain festivals, where they would be invited to pray to the Lord of the Dead along with the druids. When other missionaries came over trying to actually convert and baptize these druidic pagans, committees would be established made up of missionaries and druid priests issuing joint declarations against proselytizing.

Then somebody would come up with a high-blown dogmatic statement as to why the druids don't really need to accept Jesus and renounce druidism. Altars to Lugh would be set up at Fatima and Lourdes to demonstrate solidarity with all persons of the earth with a religious impulse. Meanwhile, the Irish missionaries would live many long years this way in Ireland: nobody would convert, prospective candidates would be turned down and told to find god within druidism, the missionaries would end up becoming quasi-druids themselves, and the druids would remark to each other what pleasant people these Christians were.
Posted by Boniface at 4:33 PM

The last two paragraphs are so sad, and so, so true. I remember having a conversation with a friend about the conversion of Mexico, and she insisted that while it's all well and good that it became a Catholic nation, did Cortes really have the right to go trampling in there telling people that they must stop sacrificing (other people!!!) to their demon gods? As if it's most loving to allow innocent people to die, and sinners to carry on in their sin. Let's be grateful that the saints of old cared more about the salvation of other people's souls than about being personally liked by those they are ministering to.