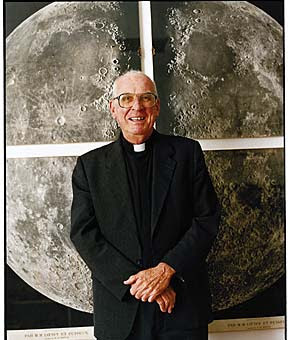 In preparing for an upcoming class I'm doing on Creation and Evolution, I came across this story from 2006.
Remember a few years back when the secular press all over the world reported with glee that the "Vatican" was now supporting Darwinian evolution and had condemned Intelligen Design as being without merit? The statement from the "Vatican" in fact had come from Fr. George Coyne, Director of the Vatican Observatory. Fr. Coyne's statements were made in a response to Cardinal Schonborn's assertion in the New York times that the concepts of random variation and natural selection were "incompatible" with Catholic dogma. Even though Schonborn is a much more prominent member of the hierarchy than Fr. Coyne, when Fr. Coyne made his rebuttal, the press was quick to trumpet that the Vatican had "endorsed" Darwinism and condemned Intelligent Design.
That was until the Pope sacked Fr. Coyne. Following several remarks Fr. Coyne made in the Tablet, in which he said that Intelligent Design was not science even though it might "pretend" to be. Coyne was replaced by an Argentinian Jesuit. Among some of the assinine statements made by Coyne was the following:

"God is not constantly intervening, but rather allows, participates, loves. Religious believers must move away from the notion of a dictator or designer God, a Newtonian God who made the universe as a watch that ticks along regularly. Perhaps God should be seen more as a parent or as one who speaks encouraging and sustaining words" (source)

He also accused the pope of "not having the slightest idea" of what Intelligent Design means, especially in the United States. Pope Benedict, however, not only understands Intelligent Design but has been supportive of it. He has frequently referred to the universe as the product of "intelligence" and has made strong statements against evolution, at least in its atheistic materialist streak.
But isn't it funny how the press never reports on this? One Jesuit at the Vatican Observatory endorses Darwinism and all of the sudden the "Vatican" has endorsed evolution. Nevermind that Cardinal Schonborn, a student of Benedict and editor of the Catechism says otherwise. Nevermind that Benedict himself favors reserach into Intelligent Design and has fired Fr. Coyne. None of that seems to have mattered. All that matters is that one person with some official capacity at the Vatican said something favorable to the scientific philosophy of the modern world and the press was ready to accomodate it, just like they did when John Paul II made his remark in his Letter to Artists about evolution being more than a theory.
Apparently, people in the media (and many Catholics) can't tell the difference between de fide dogma and what some dude at the Vatican writes in a letter or article.
Posted by Boniface at 6:18 PM

Fr Coyne retired because he has cancer.

Wasn't sacked, the Mail was mistaken--sorry. Fr. Coyne's views on Intelligent Design are consistent with the current Vatican atronomer's views:

Your source is mistaken.

Both Fr. Coyne and the new guy make the same two errors:

1) Assuming that Intelligent Design is just another word for Creationsim.

2) Assuming that Creationism is somehow bad.

I deny absolutely that ID is the same as Creationism: take Michael Behe, one of the pioneers of ID. He believes in ID wholeheartedly yet also believes in a universe billions of years old with gradualy change over time in many aspects of life. He is certainly not a Creationist, but he believes in ID. ID is not simply a "code word" for Creationism.

Also, what is so terrible about asserting "Creationism"? This is what most doctors of the Church believed for centuries.

OK. Let's try this source then. Since the one in the UK isn't good enough.

Now, any more disputing that this guy supports ID?

Sooner or later, everyone will get it. The liberal modernism is still imbedded in the church and we need to get rid of it.

I don't think Fr. Coybe supports ID...he's decidedly opposed to it..that's what the story is emphasizing, I think.

Boniface -
That's my point is that Anonymous was saying that Fr. Coyne was consistent with the current head of the Observatory on ID. Benedict did replace Coyne because of his Darwinian views.

Let's face it. BXVI is definitely cleaning house. And I think that all those who still hold to the liberal notion of the last 40 years need to step aside, remove themselves and go back to Catechism class. Try using the Catechism from the Council of trent, which is available. Then maybe the church will return to what it should have always been. Truly Traditional without all of the self serving religious we've had for the past 4 decades.

Sorry for the rant, but sometimes the hard truth has to be stated. Tough love I guess.

I honestly don't understand why anyone cares about any of this. Do we really need a whole 'movement' (ID) just to say what can be said in one sentence: However He did it, God is the Creator of all things and sustains all things in existance? Why do we argue about this stuff? Truth cannot be contradicted by truth.