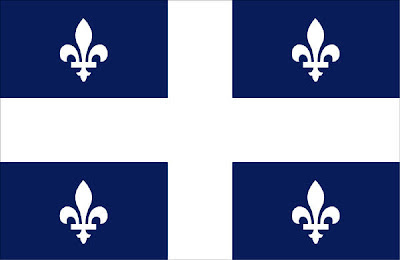 This past week was momentous in the life of the Church! The net has been buzzing with speculations about the five conditions given to the SSPX by Pope Benedict and coverage of the Pope's recent meeting with Bartholomew. However, I was interested by a story from the Washington Post someone sent me over the weekend. It talks about how Quebecois use sacred and liturgical terms for cuss words and how the Montreal Archdiocese is trying to put a stop to it. I really don't know what to make of it, so I'll just post it here.

In French-Speaking Canada, the Sacred Is Also Profane
Quebecers Turn to Church Terms, Rather Than the Sexual or Scatological, to Vent Their Anger

MONTREAL -- "Oh, tabernacle!" The man swore in French as a car splashed through a puddle, sending water onto his pants. He could never be quoted in the papers here. It is too profane.

So are other angry oaths that sound innocuous in English: chalice, host, baptism. In French-speaking Quebec, swearing sounds like an inventory being taken at a church.

English-speaking Canadians use profanities that would be well understood in the United States, many of them scatological or sexual terms. But the Quebecois prefer to turn to religion when they are mad. They adopt commonplace Catholic terms -- and often creative permutations of them -- for swearing.

In doing so, their oaths speak volumes about the history of this French province.

"When you get mad, you look for words that attack what represses you," said Louise Lamarre, a Montreal cinematographer who must tread lightly around the language, depending on whether her films are in French or English. "In America, you are so Puritan that the swearing is mostly about sex. Here, since we were repressed so long by the church, people use religious terms."

And the words that are shocking in English -- including the slang for intercourse -- are so mild in Quebecois French they appear routinely in the media. But not church terms.

"You swear about things that are taboo," said Andre Lapierre, a professor of linguistics at the University of Ottawa. In the United States, "it is not appropriate to talk about sex or scatological subjects, so that is what you use in your curse words. The f-word is a perfect example.

"In Canadian French, you have none of the sexual aspects. So what do you replace it with? You replace it with religion. If you are going to use a taboo word, it would be anything related to the cult, to Christ, the Communion wafer, Jesus Christ, vestments, and elements of the altar like tabernacle. There's quite a few of them."

Visitors from France are dumbfounded at that use of French, said Lamarre. "But that's because they got away from domination of the church a long time ago. They cut off the head of the king really early. We didn't do that."

The Catholic Church was overwhelmingly dominant in Quebec from early in the province's history -- England's King George III gave the French Catholic clergy enormous power in 1774, in part to counter the growing American insurgency to the south. In the "Quiet Revolution" of the 1960s, Quebecers rebelled. They "just stopped going to church one Sunday," as Lamarre put it.

The swearwords have persisted even though church attendance has plummeted in the past 40 years. Because of that drop, "when the young kids on the street are swearing, they don't even know what they are swearing about," mused Monsignor Francis Coyle, pastor of St. Patrick's Basilica in Montreal. "They're baptized in church, and that's about it."

Last spring, the Montreal Archdiocese commissioned an advertising campaign that erected large billboards in the city intended to shock and educate. Each billboard featured a word like "tabernacle" or "chalice" -- startling swearwords on the street -- and offered the correct dictionary definition for the religious term. Such as: "Tabernacle -- small cupboard locked by key in the middle of the altar" containing the sacred goblet.

"The point was to try to get people not to use the terms too glibly," Coyle said.< /div>
The campaign ended, but Lapierre said Quebecers continue to use the words in highly inventive ways -- as expletives, interjections, verbs, adverbs and nouns. One could say, for example, "You Christ that guy," to mean throwing a person violently. "I don't know any other language that does that so well," he said.

The French here also modify the oaths into non-words, depending on the level of politeness desired. The word "bapteme" -- baptism -- is used as a strong oath, but a modification, "bateche," is milder. The sacramental wafer, a "host" in English and "hostie" in French, can be watered down to just the sound "sst" in polite company. "Tabernacle" can become just "tabar" to avoid too much offense.

The oaths are so ingrained that one cannot converse fluently without them, said Lapierre. "I teach them in my class."

Strange indeed! I'm curious to know more about how the Catholic Church repressed the Quebecois, since the article says nothing about it other than referencing the clergy's "enormous power," which may just mean any power at all!

That is just so awful!

There's no way God would approve of that diabolical crap.

And the worst curse of all.... you have to be really "bad" to earn this acclaimation....

That really hurt me bad, when I was so labeled. Ouch.

The same is the case in Spain, where among the common swear words is "hostia!". It's funny that this is not also the case in Latin America.

I've worked in Quebec for years and this story is quite true. I especially hate "tabernacle" and "saint sacrament".

You have to understand French Canadian history a bit to know what the Quebeckers mean when the complain that the Church was repressive. For a lot its history, Quebec found itself surrounded, besieged and alone. It was stuck between France, which was anti-Catholic and apathetic to Quebec, and protestant, anglophone Canada and America. As a result, the Church developed a defensive bunker mentality. The Church ran all the schools and hospitals. As well, it controlled most of the political decisions of the country. The Church was very suspicious of foreign, international influence and tended to be very conservative and defensive. As a result, Quebec tended to lag behind the rest of the country economically.

But really, the swearwords are not that exceptional. Elizabethan English has a number of similar ones, like "by his wounds", "God's blood", "by Mary". Of course, before the Dissolution, England had more monasteries per capita than any country in Europe, so perhaps we were repressed and monk-riddled as well, harhar. At least these words are clearly blasphemous and in violation of the 2nd commandment, whereas I don't even want to imagine the muddle-headed puritanical thinking that goes into explaining why saying s*** is wrong. If I'm to sin, give me a sin I can repent of, at least.

It is truly lamentable that these words are used, but I also fret over simple Christian terms which are used for non-vulgar, but "simple" profane uses, because I feel they already do a dishonor to what they represent. For example, the word "incarnation." I think it should only refer to THE Incarnation, and don't particularly like when it is not.

Hmmm....the 'repression' thing is interesting. Though I do think many Quebecois really did feel 'repressed' by the Church - historically, things get bad (for the Church!) when the Church has too great a secular power, which was true in Quebec.

Anyway, what I was going to say is that, yes, we swear by what is taboo, we mostly swear by what has *power* - power to draw attention and power to fascinate. In our culture, that's mostly sex. It wouldn't be a bad thing if sacred words still had that much power to captivate us.