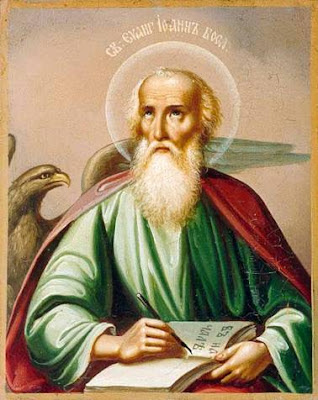 How many times have you been reading something about the Gospel of John and started running across language suggesting that the fourth Gospel was a "compilation" of many "oral traditions" that were handed down in a "Johannine community" and finally committed to writing by unknown authors sometime around 150 AD? Or how often to you pick up a commentary on Sacred Scripture which suggests that the parables and miracles of ther Gospel of John are not historical accounts of the sayings and deeds of Jesus but are only tales invented long after the death of Christ to reflect the theological beliefs that a certain community of disciples had come to attribute to Him?
Blah! Away with such nonsense. If you've ever perused through anythign relating to the Fourth Gospel (or had the stomach to watch anything from the History Channel on the New Testament) then you almost certainly have ran across this kind of drivel before. For modernists, the Gospel of John is to the New Testament what the Book of Daniel is to the old.Fortunately, the Pontifical Biblical Commission of 1907 handed down three judgments concerning the authorship and historicity of the Gospel of John. Let us recall that the judgments of the PBC were backed by the highest authority in the Church, as Pope St. Pius X said in Praestantia Scripturae:
"We now declare and expressly enjoin that all without exception are bound by an obligation of conscience to submit to the decisions of the Pontifical Biblical Commission...exactly as to the decrees of the Sacred Congregations which are on matters of doctrine and approved by the Pope; nor can anyone who by word or writing attacks the said decrees avoid the note both of disobedience and of rashness or be therefore without grave fault [i.e., mortal sin]."
In the first place, concerning the authorship of this Gospel, the PBC takes into account the massive testimony of antiquity to an authentic Johannine authorship: the testimony of the holy Fathers, ecclesiastical historians, but also of heretics, the public liturgical use of the Church, and the universal tendency of antiquity for the name of John the Apostle to be everywhere and at all times attached to this Gospel, the PBC states that the authorship of John is "firmly established" and that the textual and hypothetical counter-evidenced introduced by critics is not of sufficient strength to even weaken the tradition. Take note modernists: the Church does teach that the Fourth Gospel was written by St. John the Apostle!
Interestingly enough, regarding the differences between John and the Synoptic Gospels, as well as the differences and similarities between John and the three Epistles bearing his name, the PBC says that the taking into account of differences in time, intended audience and aim of the author is sufficient to enable us to reach a reasonable solution that the events recorded in the Gospel of John are in fact historical and that we need not postulate a novel authoriship theory to account for them. It is not necessary to invent a 2nd century, highly theoretical "Johannine community" to square the theology of John with the Gospel of Mark.
In the third part of its judgment on John, the PBC specifically denies the proposition that "the facts narrated in the fourth Gospel were invented wholly or in part as allegories or doctrinal symbols and that the discourses of our Lord are not truly and properly the discourses of our Lord Himself but the theological compositions of the writer though placed in the mouth of our Lord." The historicity of John and the veracity of all the sayings attributed to Christ are affirmed.
Thus, we have three items laid down by the PBC which we must believe concerning John, on pain of disobedience and grave fault: (1) the Gospel was written by none other than the Apostle St. John, (2) Any differences, textual or otherwise, between the Synoptics and John can be resolved reasonably without denying the traditional authorship, (3) All of the sayings and deeds of our Blessed Lord in the Fourth Gospel are to be taken at their historical face value as true sayings and works of Christ Himself.
Posted by Boniface at 1:32 PM