How should a Catholic approach the Founding Fathers? 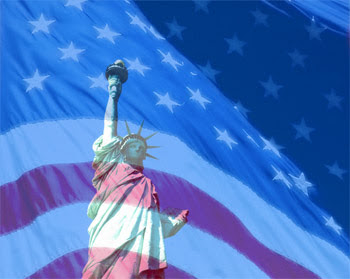 Fourth of July and the yearly celebration of the indepenedence of the United States from Great Britain bring to mind the problem of Catholic patriotism in a historically anti-Catholic nation. How are Catholics to approach the Founding Fathers and the origins of this country? Sometimes, we experience a little bit of schizophrenia, identifying ourselves very strongly as patriotic Americans when the situation calls for it, but often times having to step back and recall that the America we are celebrating has not always been friendly to our Faith, either in past or the present. Our primary fidelity is to Christ and His Church.
I notice two prominent schools of thought in the relationship of Catholics to the nation of America. First comes what I might call the conservative patriotic position, which is held by many conservative, popular Catholic writers and thinkers. This position tends to identify itself with the conservative Republican mold and therefore professes many of the things that Republicans also profess: the great goodness of capitalism, the inherent goodness of democracy, the justification of the Iraq War.
On the other hand, there is the extreme traditionalist viewpoint (which I only call extreme in relation to other views, not because I believe it to be unstable or illogical). This is the view that the United States is thoroughly corrupt and has always been an enemy to the Catholic Church. These persons would advocate a return to some sort of institutional Catholic government, possibly even a monarchy, if that were possible. The Founding Fathers are little better than Cranmer and Luther as far as they are concerned.
I take neither of these two positions. I acknowledge that many of the founders of this country, especially the Massachussetts pilgrims, were among some of the most bigoted and ignorant anti-Catholics to ever walk the earth. This, I do not deny. However, on a natural level, I admire any person who is willing to travel thousands of miles over the sea to an unknown land to hack a living for themselves out of wild and hostile woods, facing starvation and Indian attack just to live as they please. Religious conviction aside, I think we could use more men of this caliber in our world today, at least as far as concerns their willingness to suffer hardship and labor for the ability to live as they choose. I think it is a regrettable accident of history that these men were Puritans, for I do admire them despite their anti-Catholicism.
But this is no different that the dilemma that the Church Fathers often faced when looking back at their national heritage. Rome had a great tradition of patriotic and civil heroes, before and after the Christian era. How were the Fathers to view these men? With most of them, especially those who came earliest, the Fathers have nothing but praise. Consider St. Augustine's praise of the heroic virtue of the pagan Marcus Regulus in the first book of the City of God. Though Augustine knows that Marcus Regulus worshipped false gods, he is able to recognize natural human virtue and thus praises Regulus for his heroism during the Punic Wars, though he points out that sacrifice for fatherland was the highest type of sacrifice known to the Romans and thus fell short of Christian sacrifice for love of God.
Nevertheless, we must draw a distinction: there is a difference bewteen a pre-Christian pagan and a post-Reformation Protestant. Regulus did not have nearly as much responsibility before the throne of God as did the anti-Catholic Puritans who left England. Remember, they left the Church of England because they perceived it as being too "papist" for their liking.
I am more concerned with modern issues affecting our relationship with the State. I would much rather withold my partiotism based on current issues touching on abortion and homosexual so-called marriage than I would because some guys 400 years ago didn't like Catholics. But ultimately patriotism does not call us to love the country unreservedly, but to praise what is good while deploring what it wrong. It is precisely because Lincoln hated one fact about his country (slavery) so much that he is remembered as a great president. Therefore, I say let us love our Motherland and rejoice in all the good we have gotten from it, both then and now, but never cease to deplore the evils of the past and present and pray for her prosperity.
Posted by Boniface at 12:39 PM

I like your article. However, it has been my experience that this country is very corrupt and evil. I say this from experience that not many could comprehend, which I will not get into.

True, our founding fathers were all Protestant and very much anti-catholic. If you look at the fine print in the constitution, you might find that "All men are created equal (unless you're not white)," and "Freedom of Religion (except Catholics)." You might have to use a magnifying glass, but I think it's there somewhere.

An example. For many generations Poland was predominantly Catholic. It averaged somewhere around 97-98% Catholic, and it's government was based on the Catholic Faith. Although, looking at the Poles that live here in the US today one would never know that, and even in Poland today, that is difficult to see. I don't know the cause of it, but my guess would be Western Modernism. This includes the US and Western Europe.

I've always believed that if the Catholic missionaries were left to do there work, the countries they entered before the Western world entered would have turned out very much Catholic. I could give a very good example, but time doesn't permit that.

So, all one has to do is look around the world and see where Western society has infected, look at the culture before that, and look at what the missionaries had accomplished before the cancer set in.