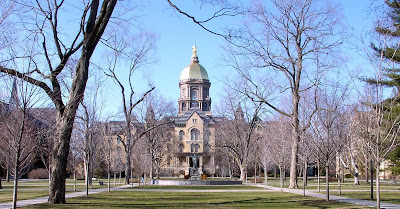 I was again perusing the autobiography of former Notre Dame president Theodore Hesburgh (liberal) before I chuck it, and I came across this interesting section on Fr. Hesburgh's interpretation of Vatican II's instruction that lay people be included, insofar as is possible, in the governing of various groups under the aegis of the Church. Listen to the following narrative of how control of Notre Dame went from the hierarchy to the laity:


"To my mind, the time had come for the priests of the Holy Cross to relinquish ownership and control of the university to a lay board of trustees who would be better equipped to oversee its future well-being...many protested at the time and many questioned that decision after it was made, more in bewilderment than in protest.


'Why, after more than a century of operation by the priests of the Holy Cross, did you turn control of the university over to a board of trustees?' That was the question.


The answer is very simple: Vatican II had said that laypeople should be given responsibility in Catholic affairs commensurate with their dedication, their competence, and their intelligence. Many people may not have taken that seriously, but we did. For me, it was the most natural thing in the world.


...Our request to transfer our property to a lay board sailed right through, which is highly unusualy for the Vatican, a bureaucracy like any other, or maybe I should say, unlike any other. The Vatican obviously did not spend much time studying my request [!], because it was approved in about two days. When Fr. Lalande [Father General of the Holy Cross priests] went to Rome to pick up the rescript, one of the functionaries in the Congregation for Secular and Religious Institutes told him that because of the value of the property, we would have to pay the congregation a fee of ten thousand dollars. Lalande was not having any of that. 'The reason we're doing this,' he said, 'is because of the Vatican Council, the highest authority in the Church. You cannot penalize us because we're doing something in the spirit of the Council...if you give me any trouble, I will go to the Holy Father.'"


Notice a few things about this. First, another use of the offensive phrase "spirit of the Council" to justify something that the Council never called for. Second, the implicit evidence of conciliarism in Fr. Lalande's exchange with the functionary from the Congregation for Secular and Religious Institutes. He exclaims that the Council is the "highest authority in the Church," - and not just Councils in general, but the Second Vatican Council in particular. Seems an example of Pope Benedict's statement that many turned Vatican II into a "supercouncil" and the absolute highest authority, a neo-conciliarist vision of the Church, one which many still have.


What does Vatican II say about lay control? I assume Fr. Hesburgh's statement about the Council seeking to get lay people involved is a reference to Lumen Gentium, chapter IV on the role of the laity. I recently reread this whole section, and can find nowhere where it mandates or even suggests anything close to universities or institutions run by priests and religious being relinquished to the laity.


In section 32:2, we read that the lay people are to assist their pastors if they need it:

"Pastors of the Church, following the example of the Lord, should minister to one another and to the other faithful. These in their turn should enthusiastically lend their joint assistance to their pastors and teachers" (LG 32:2).

Lending joint assistance is a far cry from totally taking over control, however. A better case could be made from 33:4, which states:

"Upon all the laity, therefore, rests the noble duty of working to extend the divine plan of salvation to all men of each epoch and in every land. Consequently, may every opportunity be given them so that, according to their abilities and the needs of the times, they may zealously participate in the saving work of the Church" (LG 34:4).

This is undoubtedly what Hesburgh refers to when he mentioned lay people taking over according to their abilities. But in what sphere does the Church envision these lay persons "extending the divine plan?" Is this really a blue-print for a taking over of institutions governed by priests?


Paragraph 35 gives us the answer:

"Let them not, then, hide this hope in the depths of their hearts, but even in the program of their secular life let them express it by a continual conversion and by wrestling "against the world-rulers of this darkness, against the spiritual forces of wickedness" (LG 35:1).

So again, we have a similar confusion as we do with the liturgical issue of "active participation." The Council does call for the laity to "zealously participate" in the life of the Church, but that participation is to be carried out "in the program of their secular life" by means of "continuing conversion," not by assuming literal control of institutions run by clergy. The laity are to sanctify their own lives in their own spheres by prayer and penance and greater devotion to God, not by changing roles with the clergy. That actually goes against what LG specifically calls for.


Let's look at one final paragraph from Lumen Gentium:

"Let the spiritual shepherds recognize and promote the dignity as well as the responsibility of the laity in the Church. Let them willingly employ their prudent advice. Let them confidently assign duties to them in the service of the Church, allowing them freedom and room for action. Further, let them encourage lay people so that they may undertake tasks on their own initiative. Attentively in Christ, let them consider with fatherly love the projects, suggestions and desires proposed by the laity.However, let the shepherds respectfully acknowledge that just freedom which belongs to everyone in this earthly city"(LG, 37).

Pastors are to respect the ambitions of the laity, support their plans, and "assign them duties," but nowhere does it suggest that the managerial roles of the laity and the clergy be switched, especially in Catholic institutions of higher learning.


We see here but one more example of a terrible blunder being carried out in the spirit of the Council but in utter ignorance of what the Council actually mandates. Thank God priests and bishops like Hesburgh are retiring by the boatload, going away to write their insipid memoirs in the shadow of their empty seminaries and decadent schools with the astounding arrogance to go on asserting that their decisions were "good" for the Church. So long Hesburgh. Good bye book. It is now in the can.
Posted by Boniface at 4:02 PM