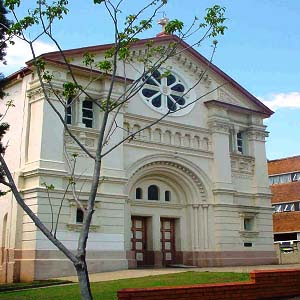 St. Mary's, South Brisbane, Australia
Check out this brief article from Catholic News about a parish in Australia where there is much anger about a supposed Buddha statue in the sanctuary. As you read this, keep in mind that, according to the Australian news site Courier Mail (which originally ran the story), this parish is one of the most popular in Brisbane (my comments and emphases):
Brisbane Archbishop John Bathersby is considering whether the controversial St Mary's parish at South Brisbane "is in communion with the Catholic Church" after a parishioner protested to the Vatican over a Buddha-like statue. A member of St Mary's South Brisbane Church told The Courier-Mail that it was understood Archbishop John Bathersby was weighing up the future of the church, after complaints were forwarded from the Vatican [is the Archbishop anrgy about the complaints, or about the people complaining? It is a little unclear].
"A very right wing parishioner came and was offended by some of the artwork in the church [is it really necessary to identify the parishioner as "very right wing," as if only right-wing Catholics are upset about possible idolatry? I guess this incriminates "left-wing" Catholics implicitly by suggesting that they are not offended by idolatrous images], including some indigenous art, and an image of a praying monk which they mistook as a Buddha," the parishioner said. "That person took photos and sent them to Rome and Rome wrote to the bishop" [Here is the problem: perhaps this image was of a praying monk, and perhaps it was really the Buddha. There is no way to tell, because modernist Catholic portrayals of saints and characters of the Faith are made to look culturally ambiguous, so that you are not sure whether you are looking at an image of Christ or of the Aztec war-god Huitzilipotchli. I'm not saying all images have to look like baroque era portrayals of Christ and the Virgin, but they should at least be recognizable enough so as they are not mistaken for Buddha!] .
However, the statue - which was about 1 metre tall - had since been taken out of the church by a disgruntled person and smashed [Good. This is how pagan idols should be treated. If you don't believe me, read the Bible. Even if it was a praying "monk," it was ambiguous enough to where it's destruction seems merited].
Parish priest Fr Peter Kennedy, who has headed St Mary's for nearly 28 years, said he was unable to comment until he had heard further from Archbishop Bathersby.
In a written statement, Archbishop Bathersby confirmed he had received communiques from the Vatican about St Mary's and that they included complaints about an alleged Buddhist statue in the church's sanctuary and unorthodox masses being conducted.
He said that since speaking with Fr Kennedy, he had received many letters from parishioners concerned that the church might be closed. He had responded by saying "the key question is whether St Mary's is in communion with the Roman Catholic Church or not." This was something he had previously raised with the church's community and "nothing has really changed since then" [I wonder what the Archbishop means by this. Does grave liturgical abuse put one out of communion with Rome? It would seem so, since for decades traditionalist groups who were less than enthusiastic about implementing the destructive commands of their often liberal Ordinaries were branded as schismatics. I would like to hear more canonically on what actually puts this parish out of communion with Rome-it could be an important precedent].
In 2004, claims that incorrect language was being used during baptism were upheld and hundreds of baptisms conducted at St Mary's were ruled invalid by Archbishop Bathersby.
Posted by Boniface at 8:44 AM

"you are not sure whether you are looking at an image of Christ or of the Aztec war-god Huitzilipotchli."

Stop it, Boniface - you're killing me!

The Aztec war-god Huitzilipotchli would/could certainly open a pot-a-chili, or can of worms anywhere else (like Mexico). But Australia?? That would be an aboriginal idea.

Actually, though it sounds like another slow to act bishop..... more like Huehuetecti, the fire-god who is a toothless old man.

But, you know final consideration will be given to the collection plate. Wanna bet that the ruling considers the dollars of the parishioner?

Your unending slurry of puns is worse than the statue!

Money?!?!? What makes you think it's all about money. I can't imagine any priest or bishop who would place money first (sarcastically said). It does seem that some, so called religious leaders in the Catholic Church, haveplaced "mammon" over God. Don't believe it? Look right where you are. I'm sure you'll see it.

Oh, that's creepy! Definitely not part of the Catholic Church if they are writing their own "liturgy" out of whole cloth like that.