Can gore lead to piety? 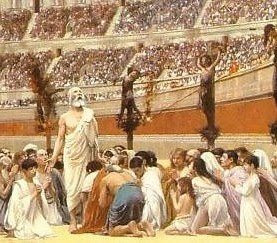 The other morning, I came into work a the parish office and found a note in my box (addressed to me as Youth Director) from a family saying that the were unregistering from the parish, nothing more. This particular family is well known for not liking our pastor and most of them lead very irregular sacramental lives. But their children come often to Youth Group and I had a pretty good friendship with them, so I decided to contact one of them (now 18 and out of YG) and ask her what the reason was for this and whether or not her other siblings were still going to be allowed to participate in Youth Group.
She told me that when I did a lesson on martyrs several months back, her younger brother had got nightmares from one of the martyrdom stories I had told. The father had gotten upset that I had shared the story with the group and wanted to pull his son from the Youth Group (none of this was shared with me, mind you. I just got a letter saying they were leaving the parish). The son did not want to leave the parish, or the Youth Group, and protested violently. His parents tried to get him to go to another Youth Group (one that hosts such things as Simpsons themed Bible studies). There ended up being a huge fight about it, and it is still not resolved.
This is what I found interesting: the parents (as far as I know) do not regularly go to Church. The children do not have much supervision as far as what type of movies they are allowed to watch, or what typeof music they listen to. In fact, it seems to me that these kids pretty much listen to or watch whatever the heck they feel like. Have the parents complained about violent movies and attempted to curb the kids' viewing habits? Have they screened the lyrics to the music their kids listen to? I seriously doubt it. In these matters, things their kids engage in every single day of their lives, there seems to be little moderation. And yet, when I relate a story of one of the martyrs of the faith one single time, this is an occasion for anger because their son had "nightmares" (by the way, after a little prodding, I found that he did not in fact have nightmares and they were just exaggerating. He simply was "bothered" by the story).
I wonder this: is it necessarily a bad thing for a person with an infrequent sacramental life to be "bothered" by one of the martyr stories? I felt "bothered" when I watched the Passion of the Christ. But what was the nature of this discomfort? Is it a bad discomfort? I would say that the discomfort we experience when seeing a bloody portrayal of the crucifixion or a particularly gruesome martyrdom account can be very beneficial. It brings to mind the heroic virtue of the saints who endured such things, and reproves us for our own cowardice when in our conscious we realize that we probably do not have the faith or intestinal fortitude to endure similar trials. I recall feeling this way when I first heard about St. Maximilian Kolbe's death. But the discomfort became a godly sorrow that led unto repentance and a further growth in piety, as St. Paul teaches.
In the end, it was as I thought: the daughter later told me that the issue was simply a ploy for the parents to justify dropping out of this particular parish and joining another; as I said, they thoroughly disliked our pastor and had long since stopped coming to Mass at our parish. If they really were concerned about what their kids were exposed to, they'd be screening their TV watching and music, as I said above. I will pray for this family, and I hope to see this young boy again.
Posted by Boniface at 4:45 PM

Very unusual, considering the giant statue of the man being tortured to death at the back of every Catholic church in the world.

I'm reminded of our society's reaction to shame and guilt, as well. No problem if our children actually do shameful things, but if somebody says something that makes them FEEL ashamed or guilty.... you can bet that you'll hear about it. How very strange.

God forbid the son or daughter ever witness their mom giving birth, or an aunt or uncle dying of cancer, .......

Those are painful events natural to this life.

Martyrdom is an event natural to attaining the next life..... something we should all be able to do ..... if we loved our God even a portion of how much He loves us.

Perhaps the kids should be exposed to lots more martyrs (like all the Apostles - including the boiling of John) to see what martrydom really is.... and the prefex of SAINT that is attached.

Too bad about the parents..... and their sad lack of catechesis.

Prayers to them.... and to the strength of your pastor that he never tire of his work.

How appropriate that you received this information during the week we ceebrate the life of St. John Vianney. How many people were displeased with him (including Satan) and look at the souls he saved.

The family should be in all of our prayers.

Do we really believe they will go to another parish? At least on a regular basis? They're phonies. too bad for the kids!