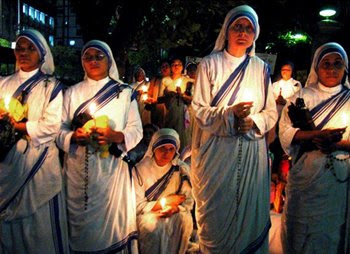 Missionaries of Charity nuns are keeping prayer vigil for peace in violence-torn Orissa state. A convent of their congregation was destroyed in the arson.
As many of you know, there has been an intensification of persecution in India. My mother, who is a Third Order Carmelite, sent me this article on the murder of a Carmelite priest two weeks ago in Hyderabad:
A Carmelite priest is massacred in Andhra Pradeshby Nirmala Carvalho. 38 year old Fr. Thomas Pandippallyil, was assassinate don the night of August 16th on his way to a village to celebrate Sunday mass. His body showed signs of torture, with wounds to his face, his hands and legs broken and his eyes pulled from their sockets. The bishop of Hyderabad denounces the growing climate of "violence against Catholics" in the country.


New Delhi (AsiaNews) – "Father Thomas is a martyr: he sacrificed his life for the poor and marginalised. But he did not die in vain, because his body and his blood enrich the Church in India, particularly the Church in Andhra Pradesh". Those are the words of Msgr. Marampudi Joji, archbishop of Hyderabad and secretary of the bishops' conference of Andhra Pradesh (a state in South East India), commenting the barbarous killing of the Carmelite priest Thomas Pandippallyil, 38, assassinated on the night of August 16th in Mosalikunta, on the road between Lingampet and Yellareddy, 90 km from the regional capital.

On the night of August 16th his body was found on the roadside by a group of people, not far from the village of Balampilly; the body of the Carmelite of Mary Immaculate carried wounds to the face while the hands and legs had been crushed and the eyes gouged out. His motorbike was found one kilometre on from the body. According to witnesses, Saturday afternoon Fr. Thomas celebrated mass in Burgida, before setting out for another village in the district where he was to have celebrated Sunday mass. The last people to have seen him alive were religious sisters from Lingapetta convent, where the priest had stopped for supper before continuing his journey.


"P. Thomas is a martyr – said Msgr. Marampudi, archbishop of Hyderabad, on hearing of the brutal murder. The Indian Church is shocked and deeply saddened by this barbarous killing, the result of a growing climate of intolerance and violence against Christians in this country". The prelate immediately made his way to the area where the massacre took place and speaks of a "traumatized" Christian community. He forcefully denies accusations of "proselytism and forced conversions". Given that there are "five families of Catholic faith" in the parish where Fr. Thomas was murdered.

Msgr. Marampudi Joji maintains the crime is the result of a climate of "jealousy of the Catholic Church", whose only fault is that of trying to help develop the abandoned rural areas of the country and support and aid those who are "victims of violence and oppression". "Priests and nuns – continues the archbishop of Hyderabad – have for decades been at the service of the least fortunate in India, and this makes them targets of forces of evil who do not want the marginalized and impoverished to become empowered".


The remains of Fr. Thomas Pandippallyil will be laid to rest on Wednesday in the Carmelite provincial house in Balampilly: the priest was actively involved in educational field. He joined the Chanda mission of the CMI on 24th June 1987. He was ordained a priest in 2002. He was the rector for the Chanda mission province of the CMI, and also worked as hospital administrator, school manager and mission centre director.

Eternal Rest grant unto Fr. Thomas Pandippallyil dear Lord, and let perpetual light shine upon him. May his soul and all the souls of the faithful departed through the Mercy of God rest in peace. Amen And may those responsible for his brutal death repent of their sin and be converted in Jesus Name. Amen

Fr. Pandippallyil is only one of several Catholics who have suffered persecution in India in the past month. As far as I can tell, it seems like this violence is being done by the Hindus. Listen to the story of Fr. Edward Sequeira, who was treated for severe burns all over his body:

It all began around 13.00 hrs" he recalled. "I was having lunch at my single room presbytery that doubles as office, bedroom and store room. The doors were closed. I heard some one calling out, 'Father, Father.' Thinking that some one was there with some patients needing to be taken to hospital I opened the door and came out.

There was a crowd of about 20 people crowding before my room. They suddenly pulled out from behind their backs, iron rods, lathies, and wooden pieces. They started thrashing me. They wanted to me to shout 'Yesu Christu Murdabad' (Death to Jesus Christ) 'Bajrang Bali Ki Jai' (Long Live Bajrang Bali).

They continued thrashing me and then pushed me back into the room, poured diesel on the floor, some fell on by clothes and set the place on fire and bolted the room from outside. I slipped on the diesel soaked floor, some how managed to reach the bath room where providentially there were two buckets of water - we do not have running water - and poured it all across the room. Without making much noise I bolted from inside all the doors and windows under cover of billowing smoke."

The Vatican issued this statement regarding the violence:


In reference to the tragic news coming from India concerning violence against the faithful and the institutions of the Catholic church, the Holy See, while expressing solidarity with the local churches and religious congregations involved, condemns these acts that injure the dignity and liberty of persons and compromise peaceful civil co-existence. At the same time, it appeals to all parties so that, with a sense of responsibility, all oppression may be ended and a climate of dialogue and mutual respect may be restored.

Please keep the Catholics of India in your prayers. You can check this blog, Orissa Burning, which has a thorough list of the atrocities being committed.
Posted by Boniface at 10:28 AM