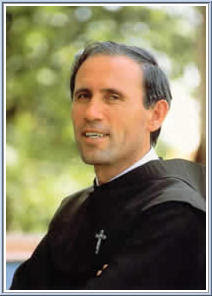 Now this is exciting! The Vatican has not condemned Medjugorje as such, but it came awfully close by imposing harsh restrictions on Fr. Tomislav Vlasic, OFM, the prime spiritual leader of the alleged seers and chief promoter of the Medjugorje movement. The announcement of the sanctions was made through the Bishop of Mostar-Duvno, but it must be stressed that this condemnation come from the Congregation for the Doctrine of the Faith itself, so no one ought to be going around after this saying that it is only the local bishop who is opposed to Medjugorje. Let's look at the statement (from Te Deum) [my emphases]:

The CONGREGATION FOR THE DOCTRINE OF THE FAITH with its letter prot. 144/1985-27164 of 30 May 2008, has authorized me as the local Bishop of the Diocese of Mostar-Duvno to inform the diocesan community of the canonical status of Fr. Tomislav Vlašić, the founder of the association “Kraljice mira potpuno Tvoji – po Mariji k Isusu” – (Queen of Peace, totally Yours – Through Mary to Jesus).


The letter signed by the Secretary of the Congregation for the Doctrine of the Faith, Archbishop Angelo Amato, states the following:


“Within the context of the phenomenon Medjugorje, this Dicastery is studying the case of Father Tomislav VLASIC OFM, originally from that region and the founder of the association ‘Kraljice mira potpuno Tvoji – po Mariji k Isusu’ (Queen of Peace, Totally Yours-Through Mary to Jesus).


On 25 January 2008, through a properly issued Decree, this Dicastery imposed severe cautionary and disciplinary measures on Fr. Vlasic.


The non-groundless news that reached this Congregation reveals that the religious priest in question did not respond, even partially, to the demands of ecclesiastical obedience required by the very delicate situation he finds himself in, justifying himself by citing his zealous activity in the Diocese of Mostar-Duvno and surrounding territories, in initiating religious activities, buildings, etc.


Since Fr. Vlasic has fallen into a censure of interdict latae sententiae reserved to this Dicastery, I kindly ask Your Excellency, for the good of the faithful, to inform the community of the canonical status of Fr. Vlasic and at the same time to report on the situation in question…”.


The Decree was handed over to Rev. Fr. Tomislav Vlašić in the General Curia of the OFM in Rome on 16 February 2008 and the notification was co-signed by the Minister General of the Franciscan Minor Order, Father José R. Carballo, the Ordinary of Fr. Vlašić.
The Decree of the Congregation mentions that Rev. Fr. Tomislav Vlašić, a cleric of the Franciscan Minor Order – the founder of the association ‘Kraljice mira potpuno Tvoji – po Mariji k Isusu’ and who is involved in the “phenomenon Medjugorje” – has been reported to the Congregation “for the diffusion of dubious doctrine, manipulation of consciences, suspected mysticism, disobedience towards legitimately issued orders and charges contra sextum.”
Having studied the case, the Congregation during its special Congress decreed the following sanctions against Rev. Fr. Tomislav Vlasic:

“1. Mandatory residence in one of the houses of the Order in the region of Lombardy (Italy) to be determined by the Minister General of the Order and to be realized within thirty days from the time of the legitimate notification of this decree;
2. All contacts with the “Kraljice Mira…” community and with its members are prohibited;

3. Any actions involving juridical contracts and administrative organizations, whether canonical or civil, effected without the written permission ad actum of the Minister General of the Order and under his responsibility are prohibited;

4. A mandatory course of theological-spiritual formation, with a final evaluation along with a prior recognitio of this Congregation, and a solemn professio fidei;

5. The following are also prohibited: activities involving the ‘care of souls’, preaching, public appearances, while the faculty to hear confessions is also revoked up until the conclusion of the terms described in the previous number, barring an evaluation of the case.

An additional sanction of a latae sententiae interdict (can. 1332) reserved to the Apostolic See is adjoined in the case of the violation of the mandatory residence (n. 1) and the other prohibited acts mentioned in n. 3 and n. 5.
Fr. Vlasic is forewarned that in the case of stubbornness a juridical penal process will begin with the aim of still harsher sanctions, not excluding dismissal, having in mind the suspicion of heresy and schism, as well as scandalous acts contra sextum, aggravated by mystical motivations.

All the priests, religious and faithful in the Dioceses of Mostar-Duvno and Trebnje-Mrkan, as well as all those concerned “in the pertinent territories”, are hereby informed on the current canonical status of Rev. Father Tomislav Vlašić.

With the sentiments of my highest consideration,

This sounds like a good time to pray and do penance: For Fr. Vlastic, for Medjugorje, and for the whole Church. Prayer and penance, done in love and humility, will surly call down God's Mercy and ruin the work of the devil.

Have you seen this article about the Pope's recent actions with Fr. Vlasic?

This is the most comprehensive article I've seen yet on this issue. It cleared up a lot of questions I had. I recommend it for anyone, whether you are for or against Medjugorje.