The End of Politics 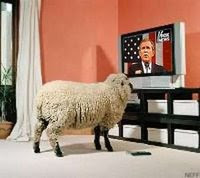 Watching the political hype unfold this summer has convinced me of the reality of something that I have long felt to be true: that we are witnessing the end of the American political tradition as we know it. "But what do you mean, Boniface? We've got politicians left and right! We've got political channels, political pundits, politics up the wazoo. How can you say this is the end of politics?"

Well, it may not be the end of corruption, or the end of manipulation of consciences, or the end of pandering and demagoguery or vain imaginings and empty promises. But it is the end of politics. Perhaps it has been this way for so long that we have inherently associated politics itself with all of these dirty things listed above, but politics and slime are not inherently linked, though they are often found together (at least in democracies!).

I think we need to go back to Aristotle, and remember that "the state or political community, which is the highest of all [communities], and which embraces all the rest, aims at good in a greater degree than any other, and at the highest good" (Pol. 1.1). As a Catholic, I would take issue with his assertion that the political community is capable of attaining the highest good, but he brings up a point that is often forgotten: on the natural level, it is in the fair exercise of politics that mankind most gloriously shows forth the virtue, excellence and wisdom that man is capable of. It is one thing to be just and wise, but to diffuse justice and widsom throughout the entire body politic is something marvellous, and something which has never quite been done, though men from Plato to St. Thomas More ruminated upon it. But the essence of what I am getting at is that, abstractly speaking, politics is good and a forum for men to act with virtue and excellence.

Okay, stop laughing now. You have to admit that it is true in the abstract at least. Governments have the greatest tendency to go corrupt in democracies, because there is the greatest amount of people involved, all of whom are sinful (as all men are). Also, because strength lies in numbers and votes rather than in the resoluteness of one man's will, democracy is more given to being corrupted by persuasive demagogues than, say, monarchy.

But, when democracy works right and when men are righteous, then it works fairly well. Here is a concept that people these days have lost or forgotten about democracy: the power really is with the people. Most people today participate only in national elections, when the local city council is a lot more influential in the situations that will affect their day to day lives. The school board, the city council, the state representatives and the local judiciary are all touch the voter a lot more closely than the senatorial or presidential races. Yet who knows who their district judge is? Who votes and does research on school board elections, whether the candidates are pro-gay or not? Who turns out to vote for city councilmen, even though they decide whether the field behind your house stays a field or becomes a Wal-Greens?

People in the old days understood this, and if you are a student of American history, you will know that the president used to be a rather weak figure in American politics. There were decades when senators and state representatives were much more powerful men than the president, and the citizenry knew this. People flooded town hall meetings to hear local men (people whom they knew intimately) to debate the running of the city, and politics was seen to be primarily local and only national secondarily. "Writing your congressman" was a much more effective means of getting involved in government, and a political party's convention was truly a platform to decide who was going to be nominated for an office, not just a rubber-stamping of a predetermined candidate who was media savvy. Indeed, before television and radio, what a candidate sounded like or how he carried himself was much less important than his policies and his ideas for leadership.

But nowadays, people rarely get involved locally, and this is manifested by an absurd confidence in national political figures, especially our presidential candidates. The first rule of advertising is not to promise what you can't deliver. Yet what kind of stuff are these candidates saying? They are going to fix health care, clean up corruption, take on the oil companies, make sure no hurricanes ever destroy a city again, win the war in Iraq, fix our entire public education system, pay off the national debt, strengthen the economy, bring gas prices down, stop the mortgage crisis, fix social security and make us popular again. And how, pray tell, are they going to do all this?

What!? I believe a candidate should be inspirational, as long as they also have something substantive to say! These problems with our nation took decades to emerge and are the results of the efforts (and blunders) of thousands of people! One person can't fix them! Obama can't fix the economy, let alone do it with "change." Same goes for McCain. "Experience" won't fix anything. Deomcracies, at the end of the day, are governed bottom up, and that is the only way anything can really change.

The fact that so many people are placing all of their hopes in solitary humans to fix these tremendous problems shows me that people have (a) no understanding of how the democratic process really works, and (b) if they do understand it, they have lost faith in it. It reminds me of the late Roman Republic, where people stopped going through the consuls and assemblies to get things done and instead put blind, implicit faith in a few extraordinarily powerful individuals (who acted above the law) and promised to make all their dreams come true.

Well, whatever. I'm surprised at the amount of people on the poll who voted to just chuck the whole system and set up a monarchy, but monarchies have a lot better historical track-record than democracies do. Political historians from Polybius to Aristotle on down have recognized that democracies are a rare phenomemon that only pop up at certain specific times in history, but that they are soon corrupted and thing dissolve back into monarchy or totalitarianism. I think we are well nigh to that point, if we haven't irrevocably passed it already.
Posted by Boniface at 6:25 PM

In my opinion, Democracy is one of those things which should be safe, legal and rare. It works in certain situations, almost always limited, and only in proportion to the ability of the people to govern themselves. Jefferson was one of the few of the American fathers to realize this, and this is why he predicated his view of the ultimate American as a Yeomen farmer, someone who owns property and farms his little self sustaining plot. Why? Because such people are far better able to govern themselves.

A populace crowded into suburbs and cities is unable to govern itself, eternally dependent upon the government, business, etc. for its subsistence. This is why the nanny state becomes so popular.

Probably your most salient point is that while most people now know that a woman they have never met from Alaska has a 17 year old daughter that is pregnant, they do not know the name of the most powerful person within 15 miles of them. Fundamentally we are no longer a people capable of governing ourselves, which is what democracy depends on. It worked in Athens while people did this, it worked in Rome for a time, and it worked here until maybe 1860. When things get too big we look to others to solve our problems.

Speaking as one who has worked at state legislatures in various capacities, I have to strongly concur with what you are saying. In my youth, there was a pervasive concept (usually observed in the breach, but given homage to) of responsibility as a balance to rights, and a concept that it was the public good rather than some less compelling good that all involved (Republican or Democrat or independent or whatever) were striving for. Now, however, I have to agree that we are in a situation compared to the late Republic/early Empire in Roman times...except that public moral depravity seems to be similar to a later period in Roman history...