Prayer is not intrinsically powerful 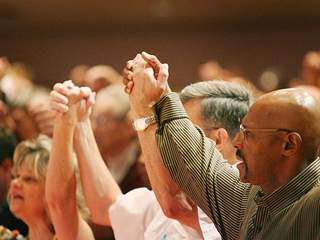 Interfaith prayer in Detroit
First off, apologies for my prolonged absence of four days (and Anselm's absence of several months until his post from Thursday). As Anselm would tell you, we just keep getting busier and busier. I just started three classes for my education program (which I am thankfully getting close to being done with) and Anselm is back at the ITI in Austria with seven classes. I also went camping last week, where I was introduced to the phenomenon known as "foxfire," or glowing wood, something which many people know about but I had never seen, and so it freaked me out when I found a glowing, rotten piece of wood out in the woods. Anybody else ever seen that stuff? It's caused by a fungus, I understand.
Anyhow, in my education classes and in the world at large I often notice people attaching ultimate, intrinsic goodness to things that are only good relatively speaking. In the education world, it is reading. The goal is set as getting kids to read. Read what? Well, it doesn't matter, so long as they are reading. This was the argument when I was a boy and the horrid R.L. Stine Goosebumps books were popular. Some parents and educators protested that the books (published by Scholastic) ought not be encouraged or assigned in school because of their ghoulish subject matter and their adult content (which frequenltly included murder and many other things you'd find in any horror film). The response of the teachers and the partisans of degeneracy was that "at least the kids were reading something" and that given all of the teenage illiteracy, we ought to be thankful that the kids were reading Goosebumps. This debate was resurrected when the Harry Potter books came out a decade later.
Nobody ever stopped to think that perhaps in some cases not reading at all is better than reading something bad. I definitely think this is the case, but reading had been assigned an intrinsic value, as if reading in and of itself was beneficial regardless of what was being read. As if it were some exercise like sit-ups or jumping jacks that would strengthen the mind just by doing it! They tended to ignore the fact that reading involves the communication and assimilation of ideas, ideas which can be disastrously harmful. Is there really no difference between reading Tom Sawyer and Mein Kampf? Well, as long as they're reading...
Prayer is the same way! I heard a Protestant talk show host make an excellent point this morning. He was referencing a "Pray for Detroit" rally held in the city this week to pray for the Detroit area given all of the scandal with the mayor and all that...the rally was sponsored by a unity church, and welcomed Buddhists, Muslims, pagans, Christians, Hindus and everybody else to come together in "unity" to offer up prayers for the city. Prayer was described as "a bonding force that can bring us together," the event organizer was quoted as saying in the local paper.
The Protestant host asked this question: Is there power in prayer? Yes, but with this qualification: the prayer derives its power entirely from the Person to whom it is addressed. There is power in prayer, but that power comes from the True God (or by extension, one of the Blessed in communion with Him who mediates it). Prayer offered to a false god is worthless. There is no power intrinsically in prayer if it be not addressed to the True God. However, many in the interfaith movement (and in the New Age movement as well) act as if the act of praying itself is meritorious and always good, regardless of to whom it is addressed. The importance in this type of "prayer" is not in drawing down strength and grace from heaven, but in using prayer as a type of "meditation" to unlock powers inherent in us. Nothing could be more anti-Christian.
I realize many Catholics and Christians who participate in interfaith prayer gatherings with people of other religions are not intending to pray in the New Age style, but what else are they doing? The prayers of Muslims to Allah are worthless. That's right: worthless. Of course, the True God can hear them if He so chooses, but not by any right on the part of the Muslims to be heard by Him; only by virtue of His omnipotence. And of course, whether or not a prayer is heard is entirely different from whether or not it is meritorious. If I pray to Baal, it is not only worthless in that Baal does not exist, but it is actually a mortal sin. Sometimes, prayer can be damning.
Therefore, it does not recommend itself to me as a compliment when people say "Muslims are so devout; they pray five times a day!" or anything like that. To whom do they pray? To the God whose Incarnation they deny as a tenet of Faith? Of which St. John said that anyone who denies Christ has come in the flesh in antichrist?
Let us recall: prayer is infinitely powerful, but only by virtue of the Infinite One to whom it brings us.
Click here for the article on the prayer gathering in Detroit
Posted by Boniface at 12:32 PM

The Church has authoritatively said that Muslims worship the same God as Christians. From Nostra Aetate: "The Church regards with esteem also the Moslems. They adore the one God, living and subsisting in Himself; merciful and all- powerful, the Creator of heaven and earth, who has spoken to men" Surely if they adore Him, they also pray to Him?

It seems to me that if you pray to a god who is one, outside creation, omnipotent and omniscient, you are not committing idolatry, even though you may be in error regarding other aspects of His being. When a Muslims prays, he blasphemes, because his creed contains explicit denials of Christian doctrine, but I do not think he commits idolatry.

On the other hand, prayer to an impersonal deity, a deity that exists within the created order, etc... is idolatry, and praying with such people cannot be anything but accessory to idolatry by consent, validation, approbation, facilitation and a number of other ways.

Well, it says they adore the one True God, but it does not say whether or not the one True God accepts their adoration. The CCC says that they "profess to hold the faith of Abraham" (841), but does not explain whether or not their profession is true or not. I would still say Allah is a false God, and though I haven't done the research, I'm willing to bet there are a good number of declarations from the Church in the past thousand years calling Allah a false god, or calling Muslims heathens, and what else is a heathen but one who worships a false god?

If Allah is not a Triune God, he is as false as the prophet Mohammed.

Not everyone who says Lord, Lord.....

It goes without saying that God rejects their prayers. To use an analogy, they get the address right, but God does not open the letter because they are not stamped with the blood of His precious Son, the sole mediator between man and God.

The psalms repeatedly tell us that we can only really praise God when we have been freed from sin: "Libera me de sanguinibus... et exultabit lingua mea iustiteam tuam" and so on. So, Muslims and even Christians in mortal sin cannot really make a pleasing prayer to God.

I'm curious as to whether the statement "If you do not explicitly confess God as triune, you are committing idolatry" can be backed up by any authoritative statement. It would seem to make the patriarchs of Israel idolaters... although they could at least claim to be ignorant, whereas Muslims and Jews today have no excuse.

The documents of the 2nd Vatican Council seem to give the impression that no prayer is entirely without value, even to Baal, the LifeForce, or whatever, and that there are many degrees of value, inversely proportional to the defectiveness of one's beliefs. Of course, that has to be balanced with V2's stated aim of restating Catholic doctrine in the most generous and positive spirit possible, so it must be taken with a grain of salt.

Well there is also a worldly power to prayer. As a sign of solidarity between different faiths, it shows that belief in God, granted conflicting beliefs, is very much an intrinsic part of the human condition. This goes with the tenet of our faith that the existence of God is knowable outside of revelation.