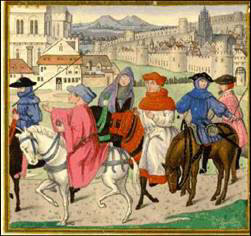 Medieval English pilgrims en route to Canterbury
This morning I went to my monthly confession. For my penance, I was told to "imagine Jesus wrapping His arms around me and giving me a great big hug." Well, I was a little confused, but I did it anyway. I went into the chapel and imagined that. It took me about two seconds. Then, feeling like this alone was somehow inadequate, I stayed for several more minutes lamenting my sins, begging for grace and mercy and resolving to walk closer to God from now on.
Of course, it is Christ's blood which cleanses us from sin, not the severity of our penance. But we firmly believe (against Luther and the Protestants) in the true remedial value of doing penance, both for our own sins and the sins of the world. Penance helps us to taste a little bit of what Christ suffered for us and in some little way to meagerly contribute to our own salvation. As St. Paul phrases it, we can "complete what is lacking" in the sufferings of Christ (Col. 1:24). Doesn't it seem, then, that a penance ought to be more in keeping with the idea of some type of sacrifice or suffering? It at least ought to be moderately challenging or outside of our regular routine.
Penance is meant to be both remedial and penal in nature. But since God is simple, the penal nature of the penance is not opposed to the remedial, just as God's love is not opposed to His justice. Penance ought to lead to my sanctification and be an actual work that requires effort. Remember, part of penance (or "punishment") is that we are doing it here so that we won't have to endure it in purgatory. When confessors give wimpy, limp-noodle penances that aren't actually penances at all, they are actually causing their penitents to spend more time in purgatory. Most people barely do any penance ever. The confessional is the one place you have an opportunity to exhort them to do so: why talk them out of it by giving them wimpy things that aren't even penitential in nature? Think of my penance: what is so penitential about imagining Jesus giving me a great big hug? And what virtue or power is there in simple imagination? It's like telling an alcoholic that the way to get sober is to imagine himself sober. That might be part of it, but that alone ain't going to get you there! (yeah, I said "ain't", cuz' it's my blog and I kan spell however I wanna spell).
Perhaps the issue is that for too many, confession has become a psychological rather than a theological reality. It has become a place where people "come to terms" with themselves and look to forgive themselves rather than seek forgiveness from God. In this type of mentality, the idea of laboring to do penance for your sins would not make very much sense, because it wouldn't be connected with the idea of "self-forgiveness" or feeling good about oneself. But penance was originally supposed to be discomforting. Forty days on bread and water. A barefoot pilgrimage to the shrine in the next valley over. Abstinence from sexual relations for one year. These things were all unpleasant. They were do-able, but they were challenging, and to accomplish them was a true conquest of self and a triumph of self-mastery aided by grace. What is so self-conquering about imagining Jesus hugging me?
I'm not suggesting everybody needs a harsh penance. Although, I tend to think that if I were a priest, it would be hard to resist saying to someone, "For your penance, I want you to sell all your possessions and walk to Jerusalem barefoot...just kidding!" Perhaps, though, priests need to remember the remedial/penal nature of penance and not be afraid to challenge people a little more. There are only two choices: the penitents can love you now because you are known as one who gives "easy penances" and hate you later when they have an extra four decades in purgatory because of them, or rather they can do the challenging penances now and thank you later when their guardian angel ushers them straight into the throne room of God among the seraphim and saints in glory.
Posted by Boniface at 2:11 PM

Wow, that's about on par with the 'pray for the hungry people' etc penances everyone used to get at St. John's. You could find a pretty good sample of AMC types at St. John on any Saturday - not so much because the penances were easy (though they were) but, I think, because Fr. raced through confessions so fast. In and out.

Personally,I think penances are best when they are restorative, as God's justice...which means that the aim should be to build up virtue to aid in the battle against sin, or to mend something broken by sin. The best 'fits the crime' penance I ever received was when, as a child, I confessed to filching change off my parents dresser, and was instructed not only to return the money to my parents, but to donate an equal amount to the poor-box. Restitution, plus detachment - the sad part is that my best example is still one from when I was 8 years old!

Once not too long ago a priest actually told me to fast for a day! I almost fell over in the confessional. I think you are right though, doing penance is as necessary as it is neglected.